Majority influence in proportional elections: the case of Brazilian mayors and city councilors

Introduction
Brazil has the most fragmented party system in the world. In 2018, 30 parties obtained at least one seat in the Lower House, with the effective number of parties being 16.4. This value is pointed out by several analysts as one of the obstacles to governance, given that the presidential party usually does not win a majority in the Legislature and must resort to multiparty coalitions to govern and to remain in office.
The diagnosis of the fragmentation of the party system was accompanied by several attempts at treatment. Institution of a barrier clause, limitation of financing to small parties, changes in the electoral system, end of proportional coalitions, among others. According to some researchers, the root of fragmentation lies precisely in the electoral system for the choice of legislators, namely: the open-list proportional system. As in this system, the party list is defined by the voter, candidates would have incentives to run personalized campaigns. Allied to this, the possibility of coalitions in proportional elections would benefit small parties (increasing fragmentation), in addition to distorting democratic representation itself (the will of the voter would be diluted).
In 2017, the National Congress approved a political reform (Constitutional Amendment No. 97), which prohibited proportional coalitions from 2020. This measure is expected to have a profound effect on the size of the party system: mainly with the loss of relevance of parties small. As political actors react to institutional changes, the question remains as to what the strategies of candidates and parties will be.
One of the hypotheses, dealt with here in an exploratory way, is that the parties would launch more candidates for the Municipal Executives, as a way to guarantee that the candidates of the proportional party list (councilors) win more votes. This is known as the coattail effect. According to Soares (2013, p.434): “The term coattail refers to the rear flaps of a cutaway that, too long, drag objects when moving. The metaphor was used by the Political Science of the United States to refer […] to the ability of a strong candidate to drag votes to other candidates in their parties”.
The objective is to observe what is the effect of casting candidates for mayor on the number of votes for the City Council in the Brazilian case?

Preliminary data and results
This research is ongoing, so the choice of variables is still limited and exploratory. To observe the possible influence of the majority elections on the results in the proportional elections, data were collected from the votes of all Brazilian parties in 2016. Brazil has 5570 municipalities and, at that time, 35 parties. The unit of analysis was the party’s vote in the municipality (82170 observations).
First, there is a difference between the performance of the parties based on whether or not they are candidates for the position of mayor. The data are compared from three groups: (0) parties without candidates for mayor, (1) parties with “first-time” candidates, and (2) parties with incumbent candidates. It is credible to think that parties that launch mandated candidates have greater resources for the competition and, with that, more votes. From the ANOVA test of difference of means, statistically, significant differences are observed. Group 0 parties had, on average, 5% of the votes in the elections for the City Council, Group 1 13%, and Group 2 20%. 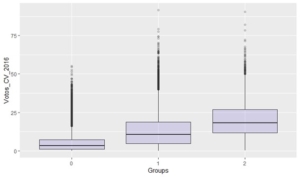 The descriptive analysis of the data shows differences in party votes. However, to answer the previous question and observe the effect of the majority candidacy on the proportional vote, other tests are necessary. Eight multiple linear regression tests were performed, considering as a dependent variable the percentage of votes of each party in the elections for the City Councils. The independent variable is whether or not the party has a candidate for mayor. The control variables are the party’s proportional vote in the previous election (2012), the number of candidates cast by the party in the municipality, and the total number of voters. The first two variables are expected to have a positive effect on the number of party votes: the previous vote indicates the degree of permeability of the organization and the greater the number of candidates the greater the vote. The total number of voters is expected to have a negative direction, given that the larger the “hunting territory”, the greater the fragmentation of alternatives to the electorate. 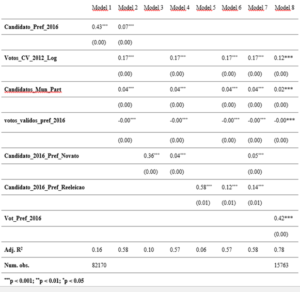 The results of the models confirm the coattail effect, but with weightings. In the case of model 1, the Candidato_Pref_2016 variable measures whether or not the party launched a candidate for mayor, regardless of the status of that candidate. Casting a candidate means adding 53% of the votes to the proportional list. However, when this variable is controlled (model 2), the effect is 7%, with the party’s vote in the previous election having a greater impact.
In model 3, candidates for mayor “novices” are considered. The effect is an increase of 43% without controls, but with controls, it decreases to 5%. In models 5 and 6, what is observed is the effect of candidates for reelection. When considering only this variable, incumbent parties tend to have 78% more votes than the others. However, with controls, this effect drops to 12% more votes. In model 7, it is possible to confirm the other results, and the party’s vote in 2012 continues to have the greatest effect on the proportional vote in 2016.
Finally, in model 8, the test is only among the parties that launched candidates for mayor in 2016. As can be seen, by the variable Vot_Pref_2016, the increase of 1% of the votes in the majority election represents 0.42% more votes in the election proportional, even with other control variables. This result is intuitive, but it has not yet been tested in the case of municipal elections in Brazil: the greater the vote for the candidate for mayor, the greater the benefits for party colleagues running for proportional elections.

Conclusions
Even though this research is initial, it is possible to draw some conclusions. Parties that cast mayoral candidates (novice or incumbent) tend to have better proportional votes when compared to parties that did not. This result reinforces the coattail effect argument.
However, when this variable is controlled by the party’s previous vote, the value of launching a candidate is drastically reduced. This demonstrates that there is a precedent effect on the performance of Brazilian political parties at the local level. If the strategy of the parties in 2020 is simply to launch candidates for mayor with the hope that they will boost their lists in proportional elections, it is necessary to realize that the results are mediated by other variables: the party’s previous performance in the municipality and the candidate’s competitiveness. launches in the majority election.

The authors received CAPES’ funding for this work.

Ames, B. (2002). The deadlock of democracy in Brazil. University of Michigan Press.