Originally published in Portuguese May 19, 2020 link 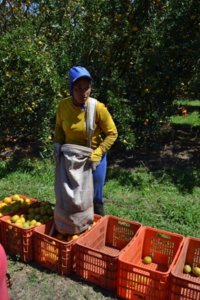 A careful reading of the news published by the various media points to the absence of references about rural workers. In a country, considered the largest producer of commodities in the world, this may cause some strangeness at first. In fact, rural workers are overshadowed, denied by the wider society. I intend to contribute so that this fog that covers them is removed so that people can see them as essential in this moment of the pandemic that is plaguing us.

Following the research carried out in Mexico (Flores, 2010) with rural workers who migrate to the USA to harvest various products, especially fruits and vegetables, I realize that there are many similarities with migrants from the northeast and the Jequitinhonha Valley (MG) who labor in the cane fields, coffee plantations and orange groves of São Paulo lands. In the USA, Mexican, Honduran, Guatemalan migrants are, in many cases, considered illegal, so they are treated as criminals. However, if there is a greater demand for them in the areas of agricultural production, the gates are opened and the guards turn a blind eye to their crossings. The important thing is not to arrest them, but to keep an eye on them and ensure that, after the harvest is over, they follow the route home. Everything happens in the context of make-believe. In times of coronavirus, when people are afraid to leave their confinements, the demand for these “illegal” workers has increased. The important thing is that they are equipped with the declaration of a company assuring them of their work. As before, the game of make-believe and hypocrisy is repeated.

In São Paulo cities surrounded by the aforementioned plantations, police control also occurs, with other nuances. As soon as the harvests are over, they are also supervised and obliged to return. In both situations, these are people discriminated against and denied. People who, according to a perverse historical process, were uprooted and forced to live forever wandering from place to place in search of work to guarantee their survival and that of their respective families. Mexican workers, represented by various indigenous ethnic groups, in addition to the process of expropriation, carried out by large companies, suffer persecution by paramilitary groups and drug trafficking. In both cases, keeping the differences in mind, they are covered by the fog that transforms them into mere vague silhouettes from one place to another.

In addition to the structural reasons that support the basis of the concentration of land ownership and production, it is necessary to consider that, in the Brazilian case, they are black and brown, in addition to indigenous people, who harvest apples in Rio Grande do Sul (Motta, 2019). It is not a question of considering them excluded, quite the contrary. They are included, but made invisible and denied. It is a way of reducing the value of their labor forces, of denying them their basic rights, subjecting them to degrading working conditions, of taking away their human dignity. In the cane fields of São Paulo, between 2003 and 2007, we recorded 21 deaths from exhaustion. In the orange groves, in addition to the excessive effort, they are forced to live with the insecticides used to fight pests.

In times of this pandemic, thousands of men and women are currently in the fields of São Paulo working on harvesting onions, oranges, mangoes, farms, etc. They are also in the cane fields, carrying out hard tasks such as picking stones before the harvesting machines enter, in order not to damage the “knives” that harvest the cane. They are collecting the remains of cane (butts) left by the machines. They also work in the distribution of vinasse (residue from the manufacture of ethanol), used as fertigation. In all of these activities (except in the distribution of vinasse), women are the majority. Gender stereotypes are responsible for this preference. They are considered more responsible, more attentive, in addition to having greater manual dexterity. In the case of the farms, they are considered to be more affectionate and more careful with the chicks, who reach there by the thousands, with only three days of life. They are cared for by women who have them as their “babies”, who are without their mothers, who need adequate heat, therefore, care with the regulation of the ambient temperature.

It is a world of work that allows the other world of part of the population to be confined to their respective homes, following the sanitary norms of isolation or social distance. It is this (invisible) world that allows the other world, although confined, to be visible. Recently, the current Minister of Agriculture, Livestock, and Supply (MAPA) declared that there is not and will not be a shortage of food products. However, he omitted in his speech that the food that arrives at our tables is produced by the hands of rural workers, whose journeys start even at dawn while preparing the food they take with them to the fields since they live on the outskirts of cities. They are also produced by family farming peasants, in small spaces, vegetable gardens, and rural settlements.

Health security is essential, but so is food security. Rural workers are essential in these dark times caused by the pandemic. Due to the working conditions to which they are subjected, it is not difficult to predict that the social situation in which they live, in addition to non-observance of the current health rules, might be an aggravating element of the risks to their health and that of their families.

News reports reveal that COVID-19 reaches millions of people worldwide. However, it is not a “democratic” disease, as has already been demonstrated. People living in vulnerable social conditions will be the hardest hit. The pandemic will undoubtedly deepen the gap in social inequities in countries like Brazil.

It is expected that people who live in the world of visible work will start to see those who are part of the world of invisible work and that there will be minimum income policies to reduce their anguish and suffering. They are invisible, but they are essential. The food that allows us to live comes from your hands.