Self-regulation on a local credit union

by Matheus Zago, University of Würzburg

Cooperation is a collective action between two or more people, for a common purpose. Records in cooperation exist throughout the history of humankind, and various forms of cooperation between humans have been noticed since antiquity[1]. The action is as old as human relations. Every day individuals have helped each other to overcome obstacles or to defend themselves from the weather, diseases, hunger, misery, etc. This concept is also related to modern times and is used in organizations that are called cooperatives.

A cooperative is a group or association of people who have voluntarily joined to fulfill economic, social, and/or cultural needs and aspirations. It is during the period of the industrial revolution in Europe that cooperatives, as we know it today, have developed.

The beginning of industrial development during the seventeenth and eighteenth centuries marked by industrial and commercial dynamism and the emergence of urban centers in extreme economic and social difficulties. The effects of this process were the exploitation of workers, particularly women and children, and a reduction in wages[2]. Also, an increase in the cost of living, and a rise in unemployment rates are other characteristics of this period.

To improve their economic and social conditions, in 1843, workers in the textile industry, who were working in Rochdale in the district of Lancashire, England, requested a wage increase and started a strike to improve their working conditions. The adverse environment explains the need for organization among the workers who founded a consumer cooperative to change their possibility of economic and social integration. Its larger goal was (and is) to improve the economic status of its owners and secure resources and work. The success of this experience turned the Rochdale Pioneers into a symbol followed by cooperatives all over the world.

In general, cooperatives are founded on the principle of self-governance. Members of these organizations are inspired by the spirit of mutual help, with an obligation to share a ‘common bond’. Some cooperative experiences can give us examples of solidarity, self-governance, inter‐cooperation, and democracy.

Our research investigates a credit cooperative that was established in Brazil in 1919. The organization — Sicredi Vale do Rio Pardo, belongs to the group of the first community credit institutions in Brazil known as Caixas Populares Raiffeisen, which was similar to the German Raiffeisen model. Its governance has inspired many other credit union institutions in the country. The management model has also gone through several transformations, both by regulatory means of the Brazilian State and by the internal actions of its members. 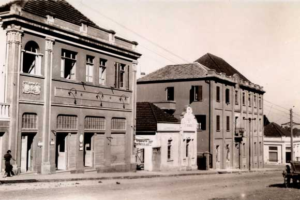 Today Sicredi (Sistema de Crédito Cooperativo / Cooperative Credit System) has 114 local credit cooperatives and more than 1,600 branches[3]. The oldest cooperative of the Sicredi system was created in 1902 in the municipality of Nova Petrópolis, in the district of Linha Imperial, Rio Grande do Sul.

The cooperative system is conceptualized as a network, and it is composed of a group of people, companies, and other organizations; with a common strategy, structure, and management process. It is interesting to note that the singular cooperatives of Sicredi are connected to a national confederation. Therefore, the confederation is responsible for the coordination and representation of the system, including the integration that allows cooperatives to use and take part in the national financial system. 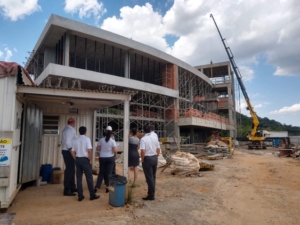 The building of the new Sicredi headquarters, Santa Cruz do Sul, 2019 – Author’s archive.

We aim to understand the trajectory Sicredi Vale do Rio Pardo and its capacity for self-organization and self-governance in a local context. For that, we search concepts and theoretical approaches through a literature review on local self-governance, weak statehood, historical institutionalism, and existing studies about Sicredi to:

a) understand the dynamics and expansion of the cooperative in a local, historical, and socioeconomic context, with a strong presence of European immigration.

b) verify the local self-organization capacity of the credit union during different Brazilian political regimes.

The nature of the work also required direct contact with the credit union to understand its local self-regulatory processes and governance. So field research was conducted over four months in Santa Cruz do Sul, and neighboring cities in the Federal State of Rio Grande do Sul, Brazil. The collection of empirical data took place in parallel with a theoretical study of topics related to self-organization in credit cooperatives.

The research is still in progress and differs from other literature on credit unions for putting the emphasis on bottom-up analysis focusing on local relationships and aspects of a singular credit cooperative, rather than using top-down analysis based on executive actions or banking legislation at the national level.

The research is integrated into a larger project called Lokale Selbstregelungen im Kontext schwacher Staatlichkeit in Antike und Moderne — LoSAM (DFG research group 2757) see (PFEILSCHIFTER et al., 2019)[5]. The project received financial support from the Deutsch Forschungsgemeinschaft (DFG) and it analyzes local self-regulation across a range of disciplines, including Political Science, Sociology, Human Geography, Ancient History, Theology, and Archaeology. Our project has an interdisciplinary character, as dialogue occurs between disciplines, sharing mutual theoretical and methodological identity[6]. The research effort is developed and strengthened using literature from a variety of disciplines, such as organizational political science, sociology, public policy, and history, where necessary. The interdisciplinary perspective adopted in the thesis happened both for the multidisciplinary nature of the research topic and for the contribution to the policy debate, which was one the aim of the research. 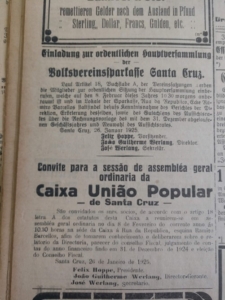 The thesis uses both primary and secondary sources. A set of documents was gathered at the administrative headquarters of the credit cooperative, comprising 100 years of existence of the institutions, from its foundation in 1919 until the year 2019. The documents included minutes of general meetings (ordinary and extraordinary), financial and administrative reports, annual reports, fiscal reports, and bylaws. Besides, information about the cooperative’s activities and the social position held by its members were collected in local newspapers and magazines. Additional primary sources include semi-structured interviews and focus groups conducted with members of the cooperative in person and by telephone.

Secondary sources for this research included articles, books, and newspapers on credit unions, economy, immigration near Rio Grande do Sul, theses, and dissertations on the credit union system, and Sicredi Vale do Rio Pardo and governance model. With data analysis, it is expected to understand the different forms of governance of the cooperative and its examples of self-management.

[2] For living standards of workers in the cotton textile industry during England industrialization see: Hopkins 1982; Brown 1990