The city governments facing the Coronavirus

Originally published in Portuguese May 12, 2020 link

Since the confirmation of the first case of Covid-19 in Brazil, on February 26th, state and municipal governments have used their large prerogatives to control contamination and minimize the impacts of the pandemic. The president’s position opened up space for sub-national governments to rise to the position of protagonists in the crisis. After two months, the questions are: what are the main measures adopted by the municipalities; what is the speed and stability of the response of the local government officials; what relationship predominated between mayors, governors, and the president?

This article discusses the measures adopted in 28 municipalities – 18 capitals and 10 medium cities in the interior – in the five regions of the country, analyzed in the series of articles “Municipal Governments against Coronavirus”, by NEPOL, until April 15th[1].

The analysis of the cases allows us to identify important differences between the municipalities about the speed and the scope of the responses. Non-legislative measures had already been taken in some municipalities since January and February as a way of preparing to face the pandemic. In the set of municipalities analyzed, the first municipal decrees related to the Covid-19 were published between 12 and 18 March 2020. In 13 municipalities (5 capitals) the mayors issued the first decree before the confirmation of the first case.

Likely, the stance of the state government and the type of relationship between the governor and the mayor will help to understand their response time. In 24 municipalities, an alignment relationship prevailed throughout the analyzed period. Almost all mayors proved to be impervious to the positions of President Jair Bolsonaro. In cases where governors have leaned towards the president’s positions, as in Santa Catarina, Rondônia, and Minas Gerais, mayors have maintained adherence to WHO recommendations. In cases in which the mayors echoed, at some point, the position of the president, as in Rio de Janeiro, Belém, Duque de Caxias, and Goiânia, the speech did not translate into practice, and they ended up being urged to maintain the measures (under pressure from state governments, organized civil society and/or under judicial decisions).

The analysis reveals a wide variety of measures and attests to the importance of the local government in the Brazilian federative arrangement. Differences in the approach of the municipalities suggest that intra and inter-regional inequalities have worked as constraints to the action of local governments. Despite this, differences between municipalities that share socioeconomic characteristics indicate the importance of political factors.

The mapping of the measures based on the analysis of the 28 municipalities allows them to be grouped into seven categories: (1) administrative, (2) containment, mitigation, and suppression; (3) economic compensation; (4) social assistance; (5) health; (6) sanitation; and (7) awareness/information.

Referring to (1), the emergency and public calamity decrees and changes in the functioning of municipal bodies stand out. Among the measures in (2) is the suspension of classes in the municipal education system, the closing of commerce, and the suspension of non-essential activities and services, the prohibition of events and crowding of people, as well as restrictions on the operation of public transport. Although all municipalities have adopted measures in this category, not all, in the beginning, have invested equally in inspection with penalties in case of non-compliance with the measures. In some cases, the Municipal Guard was employed to guide and dissipate agglomerations. Some municipalities such as Campinas, Belo Horizonte, Juazeiro, Goiânia, Teresina, Porto Alegre, and Nova Iguaçu introduced penalties in case of non-compliance with the measures by collecting fines and/or revoking the operating license of establishments.

Among the most frequent measures of economic compensation are the postponement of the collection of municipal taxes and the granting of subsidized credit, with the counterpart of job preservation. Concerning social assistance measures, it was sought to mitigate the impacts of the pandemic and isolation on those who were already in a situation of vulnerability. Frequent measures involved donating food baskets and hygiene products, donating food or vouchers to families to replace school lunches, creating places to shelter the homeless population, and, less frequently, creating emergency cash aid. The authors of the articles in the series converge, however, in the perception of the insufficiency of measures aimed at populations in peripheral neighborhoods, slums, and at-risk areas, whose sanitary and housing conditions make it almost impossible to follow WHO guidelines.

Measures to expand the structure of the health system including the suspension of public servants’ holidays, hiring an emergency appointment of health professionals, expansion of hospital beds, construction of field hospitals, obtaining and production of supplies, and personal protective equipment. In (6), the adoption of special sanitation procedures in public spaces, points of a great concentration of people and public vehicles, distribution of hygiene kits, and partnership for the production of masks and alcohol in gel form are included. 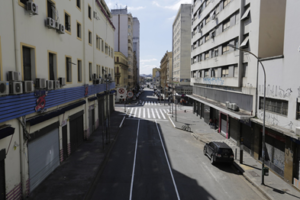 Despite the president’s pronouncements in defense of vertical isolation and strong pressure from local traders and businessmen to get on with economic activities, until April 19th, 18 of the 28 municipalities showed no signs of flexibilization. Except for Curitiba and Florianópolis, which announced the reopening of restricted commerce, in several cases such as Campinas, Belo Horizonte, Recife, Salvador, and Niterói, there was a tightening of restrictions on the circulation of people. Still, on April 17th, data from the company In Loco showed a drop, for the second consecutive week, in population adherence to isolation.

In the coming weeks, NEPOL researchers intend to advance the analysis to monitor what was done, how and with what result. We expect that the results of the study will contribute to subsidize other research and the actions of public managers in the effective fight against the pandemic.

Marta Mendes da Rocha holds a Ph.D. in Political Science from UFMG. She is a permanent professor at PPGCSO/UFJF and a coordinator of the Center for Studies on Local Politics (NEPOL), linked to PPGCSO/UFJF.

WHO – WORLD HEALTH ORGANIZATION. A world at risk: annual report on global preparedness for health emergencies. Global preparedness monitoring board. Geneva: WHO, 2019.  https://www.preventionweb.net/publications/view/67706

[1] The Center for Studies on Local Politics (NEPOL) is linked to the Graduate Program in Social Sciences at the Federal University of Juiz de Fora (UFJF). The articles can be accessed in full at https://nepolufjf.wordpress.com/os-governos-municipal-frente-ao-coronavirus/. They were written by researchers from the five regions of the country based on research on municipal legislation and press articles. We express our thanks to the authors. The responsibility for any errors in this analysis is entirely ours.