by Thomas Kestler, University of Würzburg

The emergence of the Workers’ Party (Partido dos Trabalhadores, PT) from the suburbs of São Paulo, its institutionalization, and its later rise to the presidential office in 2002 not only turned traditional Brazilian politics on its head, but it also spurred a flood of research on the phenomenon, commonly referred to as PTlogia in Brazil. An annotated bibliography on the PT from 2013 covers more than 400 pages (Metidieri Menegozzo 2013) and the flow of publications on the party has since continued.

The literature on the PT can be sub‐divided into several waves (Amaral and Power 2016). Early studies focus on the party’s emergence from the so-called New Unionism. A later wave of literature addresses the party’s organizational development, adaptation, and institutionalization (e.g. Amaral 2013; Hunter 2010; Ribeiro 2010; Samuels 2004). Finally, the policies of the PT‐government and the specific ‘PT way of governing’ are addressed in another, a more recent wave of studies (e.g. Baiocchi and Checa 2007; Hunter 2011; Samuels 2013). Thus, the story of the PT’s rise is exhaustively told ‐ is it?

At least concerning ideas, it is not. Despite the intense scholarly attention to the party, ideational aspects remain surprisingly underexposed. Indeed, the term “ideas” barely appears in the above-mentioned bibliography. Ideational aspects are secondary, especially in political science studies. Amaral and Power (2016) note that most scholars writing on the PT shielded away from the issue of party ideology.1 Indeed, the New Unionism did not adhere to a clear-cut ideology and Lula himself distanced himself carefully from established ideologies. Still, the unlikely rise of the party in an adverse environment, the strong feelings of solidarity among its members, and its capability to fundamentally challenge not only the military regime of the 1970s but the prevailing concept of Brazilian society as a whole suggest a closer look at ideational factors.

The PT’s development proceeded in different stages and constant interaction with the rapidly changing context of democratization, economic crisis, and reform. Political scientists mostly focus on the period after the formal foundation in 1980 and on aspects like the influence of formal and informal institutions (e.g. electoral rules and coalitions), the importance of organization building and conflict resolution, or the role of Lula da Silva’s leadership. By contrast, the period before 1980, when collective identities among workers emerged, is being left mainly to sociologists (e.g. Abramo 1986; Frederico 1979; Negro 2004; Sader 1988).

One reason why political scientists devote little attention to the pre‐1980 period is that they regard the factors leading to the strike wave of 1978 to 1980 and the subsequent process of party-building as self‐evident from structural developments and the context of distensão. However, when the strike wave started in 1978, neither the reaction of the military regime could be anticipated, nor could workers assess the rate of participation among their peers. They faced constant threats of dismissals and took a considerable risk in joining the strike. Approaches based on structural conditions and opportunity structures, therefore, are insufficient to explain the emergence of a powerful, independent union movement in a matter of a few years. More fundamentally, such approaches fail to explain how structural and political conditions on the macro‐level translated into collective action. After all, macro‐ conditions of themselves cannot change the individual worker’s situation of dependence and powerlessness vis‐à‐vis employers and the state. An explanation of the PT’s emergence, therefore, should take account of processes on the ideational level preceding the strike wave.

To analyze ideas in the PT’s development requires a twofold change of perspective. On the theoretical level, the role of ideas as a decisive factor for collective action and institutional development has to be recognized. Empirically, the statements, writings, and opinions of the persons involved in the New Unionism and the PT have to be taken seriously. Emphasis on ideas also entails reconsidering the role of leaders like “Lula” da Silva, whose charismatic qualities were so far regarded as a decisive factor for the mobilization of workers.

Collective actors emerge from interaction and communication. As long as grievances, deprivations, and frustration remain individualized, nothing happens. Only if experiences are shared by communication and interaction, they become a collective concern; only through structuring ideas, shared experiences translate into collective action. In the case of Brazilian workers, factories and shift busses provided a communicational space where experiences were shared. Union publications like O Metalurgico and, especially, Tribuna Metalúrgica, edited by the leaders of the New Unionism, helped workers not just to share experiences, but to make sense of these experiences.

Presumably, the basic elements of a collective worldview emerged from these publications. One such element was a transformation of the notion of “workers”, which took on a fundamentally new meaning. Workers no longer appeared as functional elements within the Brazilian corporatist system, subordinated to the superior instance of the state and valued only about its societal role, but as a dignified, autonomous class in its own right. In the course of the 1970s, “dignity” became a key term in worker’s discourse and self‐perception (Abramo 1986). The term was appropriated from employers and elites who formerly had claimed to guarantee workers’ dignity (Negro 2004). The idea of workers’ autonomy expressed itself in the new unionists’ claim to the “authentic” representation of workers.

The fact of a subordinate class directly articulating demands represented in itself a remarkable break with the conventional conception of state and society. The last and most striking step in this process was the decision to found a Workers’ Party in 1979 – in a country, where politics had always been an elite affair. Due to this shift in self‐perception, workers refused to accept the legal status attributed to them by the corporatist labor law. They rather claimed “full citizenship” and rights based on their “professional and human dignity” (Abramo 1986, p. 144). Thereby, a discursive link between dignity (as a genuine attribution of workers) and human rights (as a fundamental democratic principle), between the rights of workers and democratization, was established. “Para nós, Democracia e Liberdade sindical e a partir daí não tenho dúvidas de que alcançaremos uma democracia plena”, as da Silva put it (da Silva 1981, p. 129). 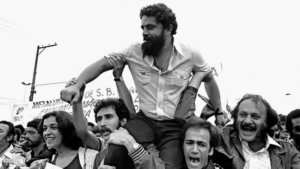 Lula at the age of 33. Photo: Reproduction/Twitter

Towards the end of the decade, the term “workers” underwent a process of extension and came to include all dependently employed Brazilians (Meneguello 1989, p. 106, 107). The transformation of the term points to a successively widening ideational horizon on part of workers and union activists, who no longer defined themselves as a particular economic actor from a particular region, but as the vanguard of a broad societal movement with encompassing political and economic goals, including elections and democracy. To the extent that the New Unionism expanded its political space, it also adapted and enlarged its goals and strategies. The focus on the right to strike as the principal means for advancing workers’ interests gave way to the goal of transforming society through a party itself.

In the light of these processes of ideational structuration and collective identity building, the strike wave of 1978/1979 cannot be regarded only as a conflict about wage adjustments and inflation figures. It rather crystallized a new collective identity. The revelation of doctored inflation figures by the union’s research institute DIEESE gave empirical substance to the image of the state as the enemy of the workers, who left them with no choice but to take their fate in their own hands. Therefore, the conflict about inflation and wages should not be mistaken as the actual cause of collective action. It worked as a trigger only because it hit upon an ideational structure, which had emerged among workers in the preceding years. A view on ideational developments in the course of the 1970s reveals a range of central themes and discursive threads that, taken together, provided an ideational framework to a working-class that in the strike wave of 1978 to 1980 turned into a manifest collective actor. 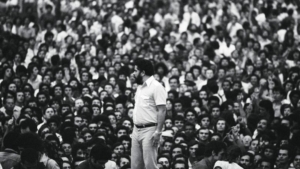 In the light of these considerations, an account of the PT’s origin should not start with the strike wave of 1978 to 1980, but with a process of ideational structuration that already began in the early 1970s. The reconstruction of this process is still incomplete and it opens up more questions than it answers. Future research should provide more evidence about the structure of the worldview that took shape in the 1970s and about its diffusion among workers. Given the importance of ideational structuration for collective action, it should also be asked how these ideas shaped future developments. It can be assumed that ideational developments mattered also after the PT’s formal foundation and institutionalization because ideas provide an important source of motivation and solidarity. Attention to ideas can also help to understand better aspects like institutionalization, institutional change, and decline. Thus, focusing on the role of ideas opens up a broad research agenda, even in the case of such an intensely studied subject like the PT.