The Cartoon as a political expression in contemporary Brazil

A brief history of the cartoon

An artistic wing in which the purpose is not to mimic reality, or even to transpose it in different contexts. One that up to a certain point does not aim at dreams, or communicate through the subconscious. From which, according to Gombrich, its maker “(…) does not seek the perfect shape, but the perfect deformity”. The cartoon represents the epitome of individual expression and accessible communication, precisely because of its synthetic and comprehensive character.
It is the representation, on canvas or paper, employing colors, of a person, action, or more generally, a theme, in which only the excess of ridicule alters the exact truth and similarity. Art consists in dismantling the real prejudice or opinion already present, and in taking expression to the maximum point of exaggeration in which the thing is still recognized, and from which it would not be recognized; this is where the cartoon is the strongest possible (NERY, 2006, p. 33).
The cartoon appears in a historical context in which the painter’s task was to reveal the character, the essence of man in a heroic, brave sense. However, in opposition to the current, in the middle of the 17th century Italian, Annibale, and Agostinno Carracci published a set of portraits “of the popular types of Bologna” called ritrattini carichi (transl. Portraits loaded), in which the intention according to Miani, was “exaggerate, increase things and acts beyond measure”. The word developed and gained new guises as the denunciation trend through the press advanced to northern Europe. In England, it gained prominence for the drawings that were remarkably similar to the ones portrayed, in which, unlike the previous caricature, there was not an excellent deformity of the features. It is possible to affirm, therefore, that the cartoon differed from the caricature in origin because it’s linked essentially to political criticism.

The cartoon arrives in Brazil

Spreading in Rio de Janeiro through artists connected with European trends, the cartoon arrives in Brazil without enhancing the acidity of the style. Lanterna Mágica magazine, created by Manuel de Araújo Porto Alegre – writer, poet, journalist, and professor at the Academy of Fine Arts, was the precursor of political humor in the Brazilian press. However, it does not contain the main attribute of the cartoon; the magazine did not satirize real subjects. This scenario changed with the arrival of Henrique Fleiuss, a German immigrant. According to Herman Lima, Fleiuss would be the real creator of the cartoon, as we know, with all its most striking characteristics, including realistic critical greed, thanks to the Semana Ilustrada, which he founded in December 1860. The Semana Ilustrada had the collaboration of renowned names from the period, such as Machado de Assis.

The cartoon in the 20th century: political subject

The cartoon became an important graphic-narrative resource, illustration and entertainment played an important role in the Brazilian press, so that the political-ideological role, contained within the journalistic activity, exported to periodicals. Social and political information, through humorous drawings, were gradually conceived as a critical expression, although it constituted a form of entertainment and a pastime for society.
The development and wide spreading of newspapers and magazines encouraged graphic artists to participate in a mood that contrasted with a discussion about the political and social reality of Brazilian society, making itself present through cartoons and caricatures. The political and customs criticism of the time consolidated the cartoon as a diffusing instrument of a political-ideological character since the up-to-date Brazilian journalism found in this modality of expression, a strong aspect to the performance of its political function within the organ of expression and control public opinion.
In this context, cartoon as a satirical-humorous illustration, becomes an ally to opinionated journalism, where the critical discourse revealed, according to Beltrão, in the duality between the serious and the ridiculous, the maximum representation of satirical illustration.
Nevertheless, the cartoon itself proves to be more democratic in the transmission of a political character, since expressive means through reading presuppose a solid knowledge of the various social problems, in addition to the ability to read under high levels of illiteracy.

The dictatorship and the cartoon: a troubled relationship

This peculiarity exposes a concern in the face of dictatorial regimes due to their wide diffusion and propagation of a criticism that is easy to interpret, insofar as the social and political reality marked by an abuse of power and censorship of freedom of expression. It is not by chance, that according to Motta, illustrates such as cartoon and comics, whose visual representation denotes a concern equivalent to traditional verbal representations under a dictatorial government, resulted in the reduction of newspaper numbers in the early 1970s, generating a concentration of companies that matched the pressure exerted by the military regime.
This media impact, exerted by journalists and cartoonists, led to censorship and imprisonment, especially with the dark imposition of Institutional Act No. 5 in 1968. Persecution was installed against the representatives of the resistance of free thought and freedom of expression, a fact evidenced with the arrest of almost all the editorial staff of the humor newspaper O Pasquim, after a cartoon illustrating D. Pedro I in the act of independence shouting ” I want Mocotó ”, an emblematic song by Jorge Ben Jor, instead of the cry of Ipiranga, glimpsed in figure 1.

However, despite repression and censorship, visual messages between the lines were subtle ways to demonstrate criticism and discontent with sensitive issues in the country in the years that followed, yet, the majority of newspapers accommodated themselves to the political situation and the adherence to authoritarian values.

The Bolsonaro government and the National Security Law

The cartoon becomes a historical document, a power of critical synthesis of a political-social reality, and is sometimes one of the first targets of censorship in dictatorial regimes. Not by chance, political instability in the country towards the press, allowed an unprecedented meeting between cartoonists and parliament to debate the cartoon as a cultural and political expression in Brazil, on November 6, 2019.
Recently, cartoonist Renato Aroeira was the target of an investigation after the publication of a cartoon expressing criticism of the government’s health policy. With the red cross of a hospital transformed into a swastika, a symbol of Nazism, glimpsed in figure 2, the cartoon echoed in an invocation of the National Security Law by the government, revealing unclouded censorship after years of democracy in the country. 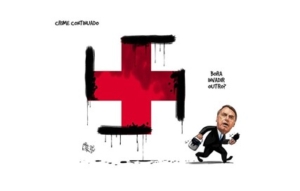 The National Security Law, created in 1983, brings with it a dictatorial stigma, applied in the face of crimes of injury or imminent danger to territorial integrity and national sovereignty. Because it is such a complex and comprehensive concept, the term ” national sovereignty ” was marked by its imprint of political persecution at the time of the dictatorship, but it exposes a latent concern to cartoonists in the face of a democratic crisis in the country.
Assuredly, art and political criticism do not fit into a violation of national sovereignty and security, as the applicability of this measure highlights a bleak scenario. In this context, although an explicit dictatorship is not experienced, legal instruments and institutions create harmful consequences, and insecurity for freedom of the press and culture, whose governmental interpretation based on anti-democratic roots.