Why does local politics matter?

As I grew up in a city with a few thousand inhabitants, in the most populous state of Brazil, I saw the municipal elections as a major event. Perhaps one of the biggest events, in my trifling perception about that small town. My recollection of the local elections is that they mobilized the residents in a similar way to the football championships in the 90s. These were times of “santinhos” [1], “jingles”, electoral propaganda on the façades of houses, waving flags on street corners in central regions of the city[2]. Also, they were times of re-democratization.

Nevertheless, I soon realized that the hosts of that great event, the candidates, were part of a select group. The family names were repeated on “santinhos”, on flags, on the walls of houses – which were billboards -, and, most importantly, throughout time. In that small town, local politics was disputed and dominated by family groups. Which, in part, made the election very competitive and intense. That first perception was not very inspiring.

Years later, when I went to study Social Sciences, my first research experience was in a project about regional cleavages and political elites; it was a project about local power. At first, I could see how challenging it would be to explore local political dynamics in a country of continental dimensions such as Brazil. I was also able to observe how the demographic, socioeconomic, and political heterogeneity of cities reinforce the differences under which political activity is designed at the local level, giving rise to very different realities. This perception of local diversity and the multiple possibilities for the inquiry was instigating.

Since then, my research experiences have been studies on subnational politics – especially on municipal politics. From that moment on I have become used to justifying “why local politics matter”. Although the relevance of the theme is evident, since the municipality is the most elementary level of democratic representation, for a long time local politics was perceived as a phenomenon confined to the physical peripheries of countries, which ended up relegating this field of investigation to the figurative peripheries of political science (GIBSON, 2013). Several implications result from this type of understanding. Among them: 1) the linking of subnational phenomena to topics of less interest; 2) the reduction of the observation scale; 3) and the association between local politics and traditional phenomena (such as clientelism and mandonismo).

Despite the recent “subnational turnaround” and the substantial increase in the number of studies dedicated to state and municipal spheres, most Brazilian political scientists still focus on national[3] political processes. However, despite the focus on Brasilia, it is through municipal elections that we elect the majority of members of the political class. It is the cities that politicians leave to occupy representative positions in state and/or federal spheres.

Also, it is important to consider that Brazilian municipalities are federative entities endowed with political, legal, and financial autonomy. This means to say that they are not mere administrative districts but a true political entity. Elected representatives in local disputes are responsible for making decisions about a wide range of public policies and services that directly impact the lives of citizens.

There are almost 70 thousand positions in dispute at municipal elections[4]. With almost half a million candidates for each electoral cycle[5]. Due to the huge number of elected officials, there is great technical and political complexity involved in local elections, which take place simultaneously in 5,570 cities with the most varied party alignments and local dynamics. In general, municipal elections are characterized by a wide range of candidates and parties. To a large extent, elections are competitive, there is alternation in power and extensive electoral participation[6]. Figures 1, 2, and 3 illustrate this scenario for all 5,570 Brazilian municipalities considering the elections held between 2000 and 2016[7]. 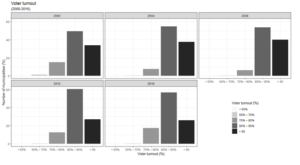 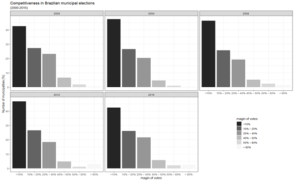 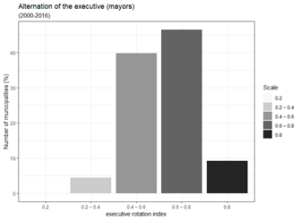 The high rates of voter turnout, the lack of a single political party force, or a single coalition of parties capable of homogenizing the Brazilian political space is because we have competitive municipal elections (but also great political fragmentation). If these elections are capable of producing alternation in power, or to put it another way, if governments are defeated and give way to the opposition, then we fulfill one of the main requirements of democracy also at the local level. In the end, looking at this broader scenario seems to be more inspiring than that of the city where I grew up.

Despite this context, these indicators do not include perceptions about the political process and the local dispute. They are insufficient to capture the different strategies assumed by subnational elites in municipal elections and the impacts produced by these strategies for democracy. On the contrary, they are just a starting point and raise further questions. It is necessary to investigate and understand local politics in its most varied dimensions and realities. Meanwhile, as Przeworski (2018) would say, we renew our disappointments and hopes with each new electoral cycle.

[1] “Santinhos” are pamphlets with printed election propaganda. This is usually information with the candidate’s name and voting number.

[3] The concentration of studies at the federal level can still be explained by the difficulty in obtaining and accessing data in different local realities. However, more recently, this is also related to the scarce resources to research on a large territorial scale.

[4] Considering the positions for mayor, vice-mayor, and councilors.

[5] For the 2020 municipal elections, there are 533,097 candidates registered. The previous record was in 2016 when 498,302 candidates applied to compete for a seat in the municipal executive or legislature. The increase in the number of candidates is associated with changes in electoral rules, which put an end to the party coalition for proportional disputes.

[6] In Brazil, voting is mandatory for people over eighteen years old, and optional for: a) the illiterate; b) those over seventy years of age; c) those over sixteen and under eighteen.

[7] The electoral data available at the Tribunal Superior Eleitoral (TSE) are only systematized appropriately from 2000.

[8] To operationalize voter turnout as a measure of participation, we consider all voters who came to the ballot box in each election. No distinction is made between valid or invalid, nominal, or party votes.

[10] We seek to verify the regularity with which candidates run for office and whether there is continuity in political leadership. In other words, we evaluate whether it is the same leaders who access power in the municipalities or whether there is a rotation of incumbents. To reach the index, we considered the number of elections held in the historical series and the frequency of candidatures, observing the electoral success of the plaintiff in the executive branch. The measurement calculation is represented by the following expression: The closer the resulting value is to 1, the greater alternation in power was identified; the closer the value is to 0 the lower the rotation at the power. To circumvent the bias arising from the rules of the political system, the measure was normalized based on the number of elections investigated: (x-0.4) / (1-0.4).