Polarization is right there: Lula, Bolsonaro, and the 2022 Brazilian elections

by Matheus Zago, Ph.D. Candidate in Political Science at the University of Würzburg, Germany.

If the elections were held today, the elected president would be Luis Inácio Lula da Silva, according to a new survey conducted by Datafolha this month. The scenario for the first round is as follows: Lula (PT) gets 46%, Jair Bolsonaro (no party) 25%, Ciro Gomes (PDT) 8%, Joao Doria (PSDB) 5%, Luis Enrique Mandeta (Democrats) 4% of the voting intentions. With these numbers, Lula has a chance of winning in the first round, as he would have 52% of the valid votes, which would give PT victory within the margin of error (Datafolha 2021). 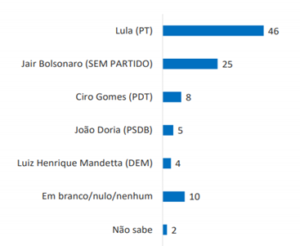 *TN: Não sabe refers to undicisive voters; Em branco/nulo/nenhum refers to voters who would choose none of the candidates or would vote blank.

Of course, it is very early to predict Lula’s victory in the first round, because there is at least a year until the elections, other candidates may appear in the political dispute and Bolsonaro may also rise in future polls. But if we evaluate the situation for the second round, a victory for Luiz Inácio Lula da Silva would be easy. If his opponent in the second round was indeed Bolsonaro, the Petist presidential candidate would win by 58% to 31%.

*TN: Não sabe refers to undicisive voters; Em branco/nulo/nenhum refers to voters who would choose none of the candidates or would vote blank.

Datafolha interviewed 2074 respondents on 7 and 8 July 2021, the margin of error is two percentage points. The current data highlights an issue not particularly new to Brazilians: a polarization between Bolsonaro and Lula in the second round. However, the current survey (July 2021) showed an additional advantage for Lula over Bolsonaro. The gap between the two candidates was set at 23 percentage points in May, and now the new survey puts Lula at 27 percentage points ahead of Jair Bolsonaro.

In addition to the voters’ intention, the Datafolha survey also asked what voters think about the current government of Jair Bolsonaro. The result shows very bad signs for the actual Brazilian president. According to the data, 51% of respondents think that the Bolsonaro government is bad or terrible, an increase of 6% compared to 45% in May of this year. This is also the highest disapproval of Bolsonaro since the beginning of his term. The result occurs in a context of pressure on the government with the actions of the COVID-19 investigations, serious allegations of corruption in the vaccine market, and other issues as shown in the Bras-Blog especial edition texts: Brazil’s Democratic “Backsliding”: why should we fear Bolsonaro’s government in Brazil? organized by Flavia Batista da Silva (2021).

Too early to tell. New investigations need to be followed up, but Datafolha’s survey allows us to develop the hypothesis that anti-Bolsonarism might have the same decisive power in 2022 as anti-Petism did in 2018.  With the COVID-19 pandemic that has killed over 530,000 Brazilians, the sinking economy, rising misery, and the opposition in the Senate controlling a CPI, Bolsonaro still follows with the decisive support of 1/4 of Brazilians.

But the political situation is not as good as Bolsonaro imagines, and the president’s support could change at any moment. In the last Datafolha survey, 63% of respondents believe that there was corruption in the purchase of Covid-19 vaccines in Brazil and 64% say that Bolsonaro knew about the corruption scandals and did not act as he should have.  Six out of ten Brazilians (59%) would not vote for Jair Bolsonaro for president in 2022. The president leads the rejection ranking of presidential candidates in the country. This is the worst indicator Bolsonaro has received since the survey began — there have been 13 Datafolha’s public opinion surveys since Bolsonaro took office in 2019. And for the record, to make the situation worse, among those who voted for Bolsonaro in 2018, 26% say they reject his name for the 2022 presidential race (Datafolha 2021b).

The reports of irregularities give rise to demonstrations and street protests against the president, whose main agenda is to impeach Bolsonaro. The survey also shows that protesters have support for this demand, increasing from 49% to 54% the number of Brazilians who believe that Congress should start impeachment proceedings to remove Bolsonaro from office —  42% disagree and 4% don’t know (Datafolha 2021c).

Should the National Congress open impeachment proceedings against President Jair Bolsonaro or not?* 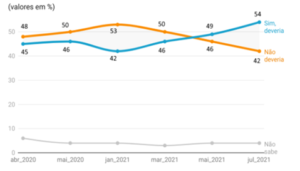 Threatened by investigations into the government and a possible defeat in 2022, Bolsonaro has ramped up his criticism of the electoral system, insisting on frauds that never existed and claiming that “without paper elections, there can be no voting in Brazil” or even saying that he will “not participate in elections that are not paper-based” — but electronic voting has been conducted in Brazil since the year 1996 (TSE 2021).

Bolsonaro’s numbers tend to get worse in the short term, because the government is still relying on the recovery of the economy, on maintaining emergency aid for needy families, while positive results may only come in the long term, and it might depend on the progress of the new COVID-19 variants, such as the Delta variant. Overall, there is no optimism.    Meanwhile, former president Luis Inácio da Silva has seen his approval ratings rise and is considered the favorite to win the next election, but it is still a question of what path the former president will take if elected. We can wonder what Lula’s administration will look like if he is elected: would we have a revengeful administration in response to his Lava Jato conviction, would we have an economy similar to his first term, therefore more liberal, or would we follow the same path as Dilma Rousseff’s?

Following in Lula’s steps after his release from federal police prison, all indications are that, politically, he will approach a centrist campaign, seeking out parties of this political spectrum, such as MDB from Renan Calleiros. Moreover, he already met with former PSDB president Fernando Henrique Cardoso and is broadening his negotiation platform with other parties in the center.  Bolsonaro is doing the same, he recently handed over some of his ministries to centrist parties. The Centrão, a group of parties that today support the Bolsonaro government in Congress, is in charge of the main ministries of the current government, competing for positions and indications with the military officers.

The decision to run a centrist campaign is certain because the electorate moved strongly to the right in 2018 and is not expected to radically change its ideological position in 2022, especially the 1/4 of Bolsonaro supporters. The centrist political orientation of Lula or Bolsonaro should translate, if elected, into a governing coalition that could last throughout the next term — one center-right or one center-left.

We might have the opportunity, in future research, to discover new explanations about the dissatisfaction with Bolsonaro and the tendency or not of a Third Way (Terceira Via) for running the Brazilian nation. One thing is valid, the sequence of reports related to the Covid-19 CPI investigations, the suspicions about vaccine purchases, and the results of the Datafolha survey have directly affected the speech of Bolsonaro, who has always insisted that there is no corruption in his government. The next chapters of this story are about to unfold.