Edited and reviewed by Anna Paula Bennech and Giovanna Imbernon

In the Global South or the Global North, we repeatedly see negative discourses about immigrants. The recent growth of a populist wave enhanced the division of society between friends and enemies as one of its core aspects. Populist political leaders share similarities, such as rhetoric nationalism, and anti-pluralism (Araújo and Prior 2020). Migrants and refugees are constantly targeted in those discourses, outgroups separated from the country and described as outsiders and enemies. For instance, the populist wave and nationalist discourses against immigration were the main factors for the United Kingdom Independence Party ascension and the results of the Brexit referendum (Evans and Mellon 2019).

In Brazil, Bolsonaro’s campaign used the same rhetoric even though immigration was not at the center of his agenda, as he was also targeting other groups, such as indigenous people, the LGBT+ community, and women. But in 2016, while he was still a member of the Federal Chamber of Deputies, he voted for the Immigration Law and stated: “See if we Brazilians have any opportunities out there. There is no reciprocity. It is a crime what they are doing here with this law, opening the doors of Brazil to the whole world. All kinds of scum will come here now!”[1] As president, Bolsonaro withdrew Brazil from the UN Global Compact for Migration[2].

During the Brazilian past governments, the political agenda regarding immigration was more optimistic. In 2009, for instance, Lula approved an amnesty law to regularize thousands of refugees and undocumented immigrants. In his speech, the ex-president thanked “all the immigrants who helped and continue to help build our country.” He defended that “irregular migration is a humanitarian issue and cannot be confused with criminality”[3] and criticized the unfair migration policies adopted by some rich countries. Following his agenda, Dilma also favored opening the country to immigration in her discourses (Cogo 2018; Dadalto 2013). Finally, Temer sanctioned the law that defined actions for emergency assistance to immigrants[4].

However, even during left governments in Brazil, research on immigrants and refugees representation demonstrates that legacy media historically represents the topic negatively.  In both western and non-western countries, media portray immigration similarly, often following a pattern of misconception. Journalists often talk about refugees referring to them as immigrants or the other way around, as seen in researches analyzing media representation about immigrants in Brazil (Brignol & Costa, 2018; Lima & Campos, 2015). But we do not have to look at the scientific literature to identify this misuse of concepts: we just need to glance at news articles. The strategy is to avoid word repetition, but the outcome is the difficulty separating different groups and the standardization of views. An example from The Guardian is shown in the illustration below: 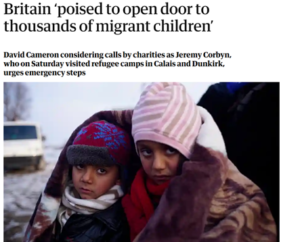 Another pattern is the negative representation. Immigration is frequently associated with problems. Immigrants are portrayed as threats that harm the economy and the host country’s culture and the source of health problems, such as Ebola, Covid-19, and others (Lawlor 2015; Cogo and Silva 2015; Ranincheski and Uebel 2018). Refugees are habitually associated with a vast mass of victims needing help, and they are uniformized (Kaleda, 2014; Morais & Santos, 2017). Journalists rarely give voice to immigrants and refugees, and official sources speak for them. The outcome is silencing the protagonist’s stories and a constant separation between ‘us’ and ‘them.’ Walls are then created through metaphors, and divisions are established in symbolic ways.

Common sense associates Brazil with diversity and a welcoming culture. The myth of diversity grounds the denial of racism in Brazil, and it also hides the high levels of xenophobia. However, when looking carefully at media production, this is not the truth. Social representations have the power to build meanings, creating common cognitions, and producing social bonds that unite groups (Moscovici 2001; Wagner et al. 1999; Sêga 2000). Since communication has a role in anchoring hegemonic representations and causing cultural assimilation, we also see reflections of society itself when we look at the cultural productions. That is why language matters so much, and we must fight for fairer ways of representing groups. Legacy media has a pattern in representing immigration, but we must change how it is covered to take down symbolic and concrete walls.

Research on the representation of immigrants and refugees points out patterns, but they usually overlook ethical questions. Although scholars analyze media coverage, there is a lack of models on adequately talking about the subject. How can we change those patterns? What should journalists do to tell those stories in a more pluralistic way? Here are some tips not only to journalists but to the entire audience. We all have the power to spread misinformation.

* Isabella de Sousa Gonçalves is a Ph.D. student at Johannes Gutenberg University Mainz, Germany holding a Deutscher Akademischer Austauschdienst Research Scholarship. She is currently researching stereotypical framing of migrants and refugees in media coverage. She holds a bachelor’s and master’s in journalism and Communication Sciences from the Federal University of Juiz de Fora (Brazil).

This study was supported by the Deutscher Akademischer Austauschdienst Doctoral Research Grant (number 57507871).