Decisionism is a political theory supported by Carl Schmitt’s (1934) thoughts, who was inspired by Hobbes (1981). This theory’s core encompasses the understanding that judicial decisions are simply submitted to the sovereign’s will, who does not need to substantiate it rationally, only to his order. Thus, political power would ultimately be the Constitution’s protector; therefore, it would intervene in the judicial sphere and decide through political criteria. Venezuela and Hungary are examples of democracies that have recently collapsed because of this transfer of powers.

In Brazil, the largest country in Latin America, decisionism is already part of the reality, as one can identify among the various threats against the Supreme Court and its ministers, as well as in protests calling for the Supreme Court’s closure. If these demonstrations were isolated and had no support from state agents, there would be no ground for concern. However, several people in power positions compact with this idea For instance, here are 6 signs of an ongoing decisionist project in Brazil.

1) in an executive branch full ministerial meeting, the former minister of education asked for the arrest of the 11 ministers of the Supreme Court, and he was not challenged by any of those present, which he called “Thugs” (MACEDO, 2020);

3) in 2017, Brazil’s current vice-president said he was in favor of a military intervention to combat corruption in the other powers (RODAS, 2017);

4) in May 2020, Bolsonaro took part in protests where demonstrators carried posters calling for the closing of the Supreme Court (DUTRA; CAIXETA, 2020);

5) when the Supreme Court’s plenary voted for the unconstitutionality of second instance imprisonment, the former commander of the armed forces, General Eduardo Villas Boas, threatened the court with the military intervention (CONJUR, 2018);

6) finally, 90 high-ranking military members of the reserve wrote a letter of support to the Minister of Institutional Security, who insisted that he would call on the armed forces to intervene if the Supreme Court decided to seize the President’s cell phone (GAZETA DO POVO, 2020).

Several Brazilian jurists tried to refer to the possibility of a decisionist power project based on biased interpretations of Article 142 of the Federal Constitution. Let us look at the provision:

Art. 142. The Armed Forces, constituted by the Navy, the Army, and the Air Force, are permanent and regular national institutions, organized based on hierarchy and discipline, under the supreme authority of the President of the Republic, and are intended for the defense of the Homeland, the guarantee of constitutional powers and, on the initiative of any of these, law and order (BRAZIL, 1988, our translation).

This article, which may not seem to produce major hermeneutic problems, has been the subject of skewed interpretations that would “legitimize” a military intervention. Ives Gandra (2020, our translation), intent to legitimize the idea of the armed forces as a power that is over the Supreme Court in judicial decisions:

I do not enter the merits of those who are right (Bolsonaro or Moro), but in the danger that such a decision brings to the harmony and independence of powers (Article 2 of the CF), the possibility of a decision being disobeyed by the Legislature that must ensure its normative competence (Article 49, item XI) or to be taken to the question – which no one would want, but is in the Constitution – to the Armed Forces, to reimpose law and order, as determined in Article 142 of the Supreme Law.

Let us look at another example of a jurist who, through a solipsistic interpretation of Art. 142, tries to legitimize the intervention of the armed forces in the other powers. This comment came from Adilson Abreu Dallari (2020), full professor at PUC-SP:

[…] there is no imbalance in favor of the executive, because the protection provided for in Article 142 is available to all powers, and completes: “When analyzing the dynamics of its operation, it remains inevitable to conclude that the intervention of the armed forces provided for in Article 142 is part of the institutional balance desired by the constituent of 1988”. In other words, both jurists agree that Article 142 should be applied to remake the balance between powers. 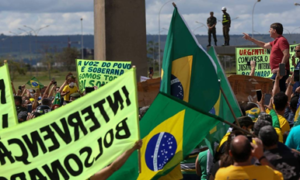 Even after the Supreme Court minister, Luiz Fux declared in an injunction that any army intervention in the powers of the republic is unconstitutional (STF, 2020), some jurists remain in favor of such interpretation. Amidst street protests, it is possible to notice several posters asking the President to convene Article 142 of the Constitution (G1, 2020). Bustamante, Cattoni, and Meyer (2017, our translation) dismiss the possibility of military intervention through Art. 142:

[…] it is not possible to interpret Article 142 beyond its basic meaning and without systematic consideration of the devices that surround it. First, Article 142 is part of Title V of the Constitution, entitled “Defense of the State and Democratic Institutions. […] The idea of a substitute power that could assume in the face of the other powers’ failure is a clear attempt to break with the constitutional order or, more directly, to promote a coup. As two members of the Federal Prosecutor’s Office, Deborah Duprat, and Marlon Weichert, acknowledged, a “military intervention” would sound like a clear configuration of what the same 1988 Constitution prescribes in article 5, inc. XLIV, as an indefinable and indisputable crime against the constitutional order and the democratic state.

In the passages above, Gandra and Dallari (2020)validate a military intervention commanded by the President. Through an arbitrary attribution of meaning, the words aim to place the entire legal order (solipsistic interpretation of the Constitution) in the executive power’s hands, which could call the army when it was convenient to maintain law order.

All previous examples are symptomatic of decisionism when read individually, yet together, it is an Executive power attempt to demoralize and threaten the Supreme Court. Article 142 of the federal Constitution would only be an excuse to give airs of legitimacy to this process. The executive branch promotes this to take judicial decisions to control what and how the Supreme Court should decide, especially concerning government interests and prosecutions against political opponents.

It seems clear that Brazil faces a process of weakening democracy, in which the law should intervene as a democratic reserve. Nevertheless, as in other democratic regimes that have undergone processes of democratic rupture, there are difficulties in the Brazilian reality because institutions are not responding as they should. The analysis of a former Supreme Federal Court’s minister, Celso de Mello (BERGAMO, 2020, our translation), explicit the relationship that this text tries to show:

Keeping the proper proportions, the “snake egg,” similar to what occurred in the Weimar Republic (1919-1933), seems to be about to hatch in Brazil! It is necessary to resist the destruction of the democratic order to avoid what occurred in the Weimar Republic when Hitler, after being elected by popular vote and later appointed by President Paul von Hindenburg, on 30/01/1933, as Chancellor (Prime Minister) of Germany, he did not hesitate to break and nullify the progressive, democratic and innovative Constitution of Weimar, of 11/08/1919, imposing on the country a totalitarian system of power made possible by the edition, in March 1933, of the Law (Nazi) of Granting Full Powers (or Enabling Law) that allowed him to legislate without the intervention of the German Parliament! As intended by bolsonaristas and other autocratic leaders who despise freedom and hate democracy, military intervention means nothing more, in the new bolsonarist language, but the establishment, in Brazil, of a despicable and abject military dictatorship!

The existence of a Decisionist project in the imaginary of members of the federal executive power is evident. Its application, although unlikely, given the possibility of its creators without the necessary popular support ended up in prison, already reveals a great weakening of democracy and the strength of law as an instrument of the democratic rule of law.