Ford of Brazil: A foreshadowed farewell

2021 started with a shock for the Brazilian industry. After more than 100 years of operation in Brazil, Ford Company Brazil decided to close its operations. With more than 5,000 direct employees, the closure of factories in the country tends to worsen a scenario that is already dramatic for the country due to the Coronavirus pandemic and the slow process of economic recovery. The company has accumulated billionaire losses in recent years, claiming that some problems with its performance in the country, such as the context of slowing demand for cars, the disappointing growth of the economy, and a predatory tax structure contribute to making Brazil a ‘bad environment for business’. The biggest difficulties refer to the circumstances of a structural problem in productivity, especially in the manufacturing industry, which makes Brazil a country where it is difficult to envision a scenario of expansion of productive capacity and increase in investments, and this implies unpredictability and insecurity in the medium and long terms.

But who is to blame after all? According to the National Association of Vehicle Manufacturers (ANFAVEA), automotive production reached 2.4 million units produced in 2019, above that seen in the previous four years, but below the nearly 3 million units produced in 2013. Also, between 2009 and 2015, the number of car sales was higher than the number produced, which indicated that this sector was heated and with little or no idle capacity. The setback came from 2016, with a serious political crisis that spilled into the economic sphere, causing a 10% drop in production from one year to the next due to a drop of more than 20% in demand for automobiles. The question then refers to which companies were able to compete in the Brazilian market – with a modest consumer about the European or American consumer – and thus guarantee ‘their share in the cake’ in the periods 2009-2015, and their perspective of security after that period and the crisis that followed.

In the last 20 years, Ford has failed to achieve even a 12% share of cumulative car sales in Brazil. According to data from FENABRAVE – National Federation of the Distribution of Motor Vehicles – the peak of Ford’s Market Share was in 2015, reaching an 11.15% share in the national market. In 2001, this figure reached 6.7%, much lower than its traditional competitors in Brazil, such as General Motors, Volkswagen, and Fiat, which also have a long presence in the country and are currently the leading companies in the Brazilian automotive market. Competition from other companies such as Renault, Hyundai, Toyota, and Nissan also contributed to the pressure on the share that Ford had previously held. 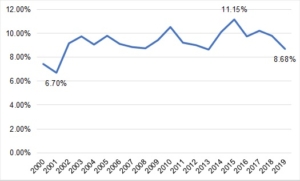 Despite the drastic reception of the company’s decision, this news cannot be treated in any way as unexpected. In 2018, Ford announced a global restructuring, ending the production of some models and focusing on the development of specific categories such as SUVs, pickups, and commercial vehicles. The closure of factories in Europe and Australia would be a prelude to what would happen in Brazil. However, the company’s operations do not end in South America. It was also announced that Ford would concentrate its production on the continent in Argentina and Uruguay. Well, if the scenario of deterioration in the Argentine economy – evidenced by its macroeconomic problems and successive crises in the last decades – was not seen as enough for Ford’s final decision, then it is worth reflecting on what directions the Brazilian industrial sector intends.

The closure of Ford’s activities not only involves problems about the generation of jobs and income (especially in the manufacturing regions) but also about the strategic role of the sector for the construction of genuinely national automobile industry. The factories located in the Northeast and Southeast regions of Brazil produced everything from basic utilities to off-road models. This last model was produced under the brand Troller, a Brazilian company acquired by Ford in 2007. With the end of its production activities in Brazil, the Troller factory will also be decommissioned. Then another company could be the protagonist of a national industrial development project.

Ford does not become exclusive when it comes to the Brazilian industrial sector. This scenario is not restricted to the automobile sector. Many companies have chosen or are considering ending production here. Companies like Sony, Nikon, and Roche Laboratories are leaving or have already left the country. Even Brazilian companies such as the giant Petrobras have chosen to transfer their contracts for the construction of oil platforms to Asia, causing a serious impact on the already staggering shipbuilding sector. This makes the country’s deindustrialization context evident and this can be shown through the behavior of the industrial sector in its participation in Brazil’s Gross Domestic Product. 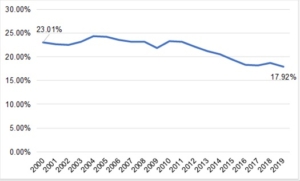 Finally, it is important to highlight the failure of the industrial development policy design adopted here in the last decade. The attempt of domestic production of (almost) whole chairs of medium and high sophistication products combined with problems with productive scale and low productivity generated the construction of an artificial industrial park tied to internal demands, considering that other countries manage to produce such products more cheaply and efficiently. The relentless search for surpluses in the trade balance – composed mainly of primary goods – impedes the continuous flow of imports of goods that replenishes products in the internal chains and improves the domestic production of goods with higher added value. The attempt to avoid these imports through policies aimed at valuing domestic production to the detriment of the external sector already has an end known here. As Edmund Burke said, “a people who do not know their history are condemned to repeat it”.