In Figure 1, we report the number of tweets on the candidates’ timeline, among the three that were part of our survey: Lula, Ciro, and Bolsonaro, according to the frequency with which the candidates tweeted in July. 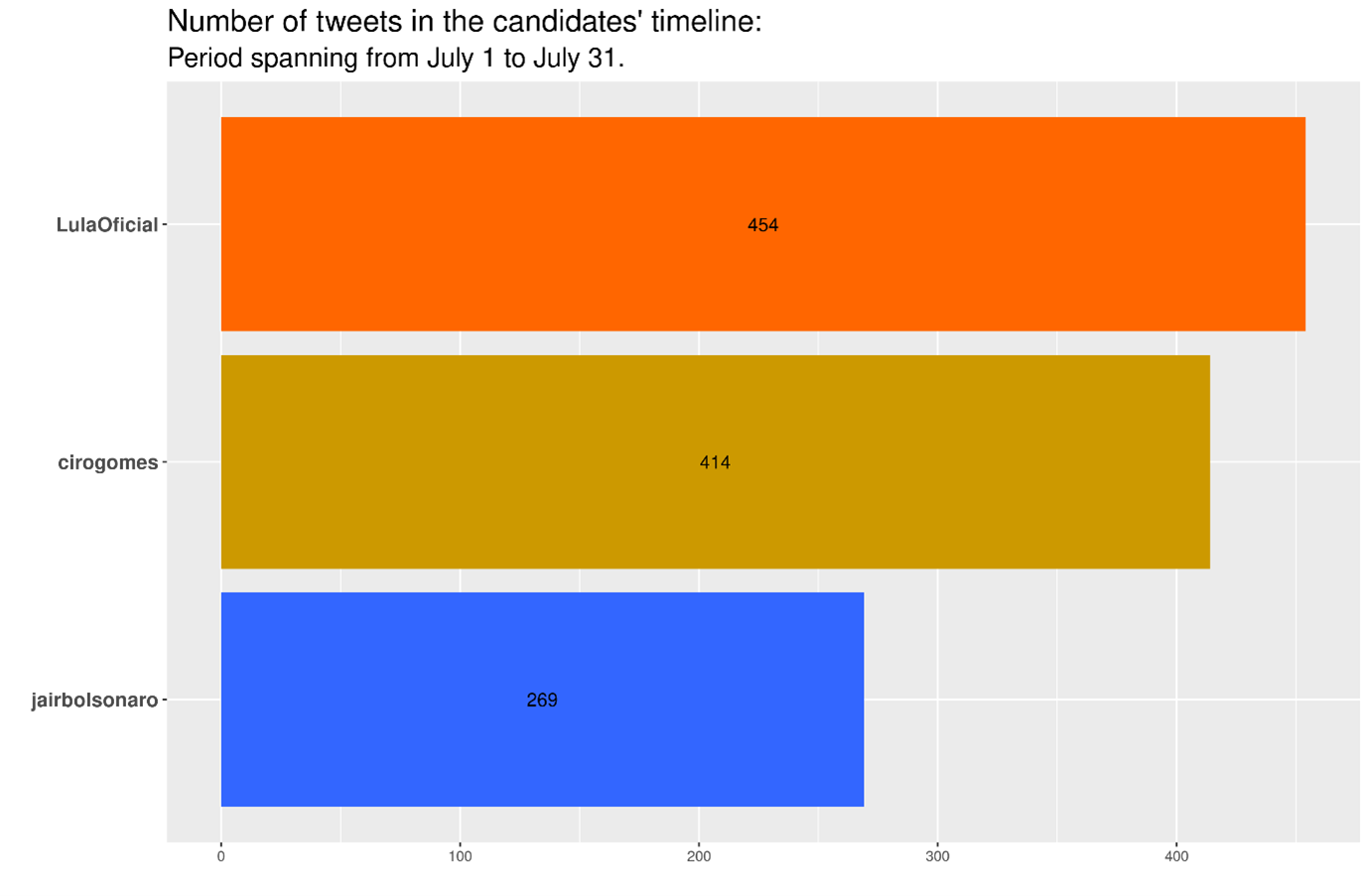 Figure 2: Most frequently used words in the candidates’ timeline. 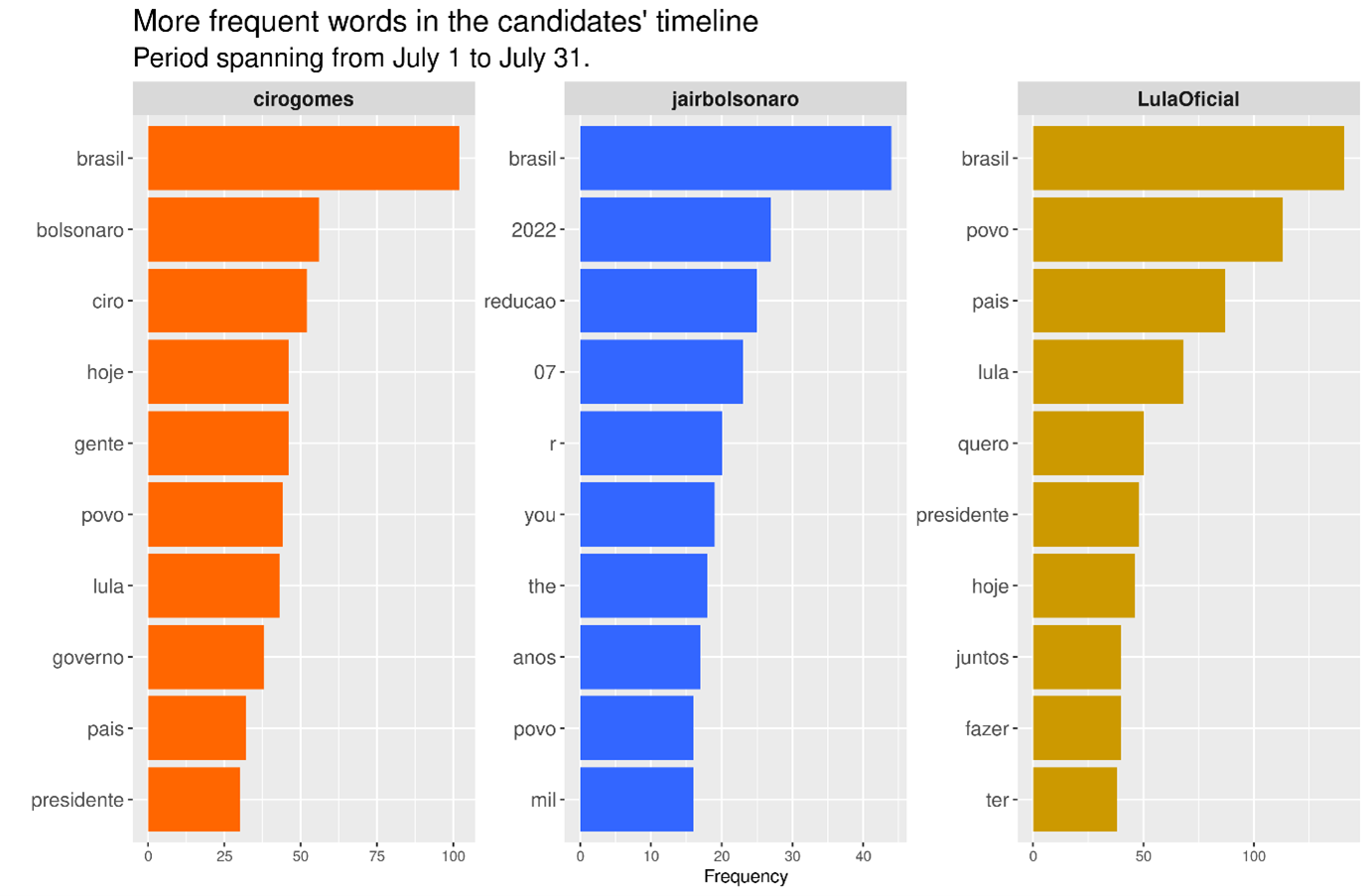 The analysis of the most frequent words in the candidates’ timeline tweets (Figure 2) allows us to present a dominant panorama of the subjects they deal with. In common in the three profiles, we find the term “Brazil”, keeping the pattern found in May and June. The difference arose in the mention of the word “people” [“povo”], also mentioned frequently in the three profiles. Although the term “people” is prominent in all candidates, it is more frequent in Lula’s profile than in the other candidates. In the profiles of Lula and Ciro, the terms “Lula”, “country” [“país”], “today” [“hoje”] and “president” [“presidente”] are common. In Lula’s profile alone, the emphasis on the verbs “to have” [“ter”] and “to do” [“fazer”] denotes the continuity of the propositional character already found in May and June, and the mention of words like “want” [“quero”], “today” [“hoje”] and “together” [“juntos”], brings an emphasis on the development of proposals. In Ciro’s profile, the concern to name the other two candidates remains, as observed in April, May, and June. It is possible to highlight in the consolidated for the month of July, the mentions of the terms “folk” [“gente”] and “government” [“governo”]. Finally, in Bolsonaro’s profile, it is possible to identify terms in English*, due to a sequence of tweets on July 27th in response to Leonardo DiCaprio**, regarding the Amazon (which had a lot of repercussions on the network). Other highlights were the mention of amounts in reais (“r”) in terms of “thousand” [“mil”], “2022”, “07” and “reduction” [“redução”], the latter being due to discussions about tax reductions.
* The English terms in Bolsonaro’s profile are quite frequent in the common English language. If stop words in the English language were also used, the terms would have disappeared.
**His account on Twitter @LeoDiCaprio has 19.666.715 followers. 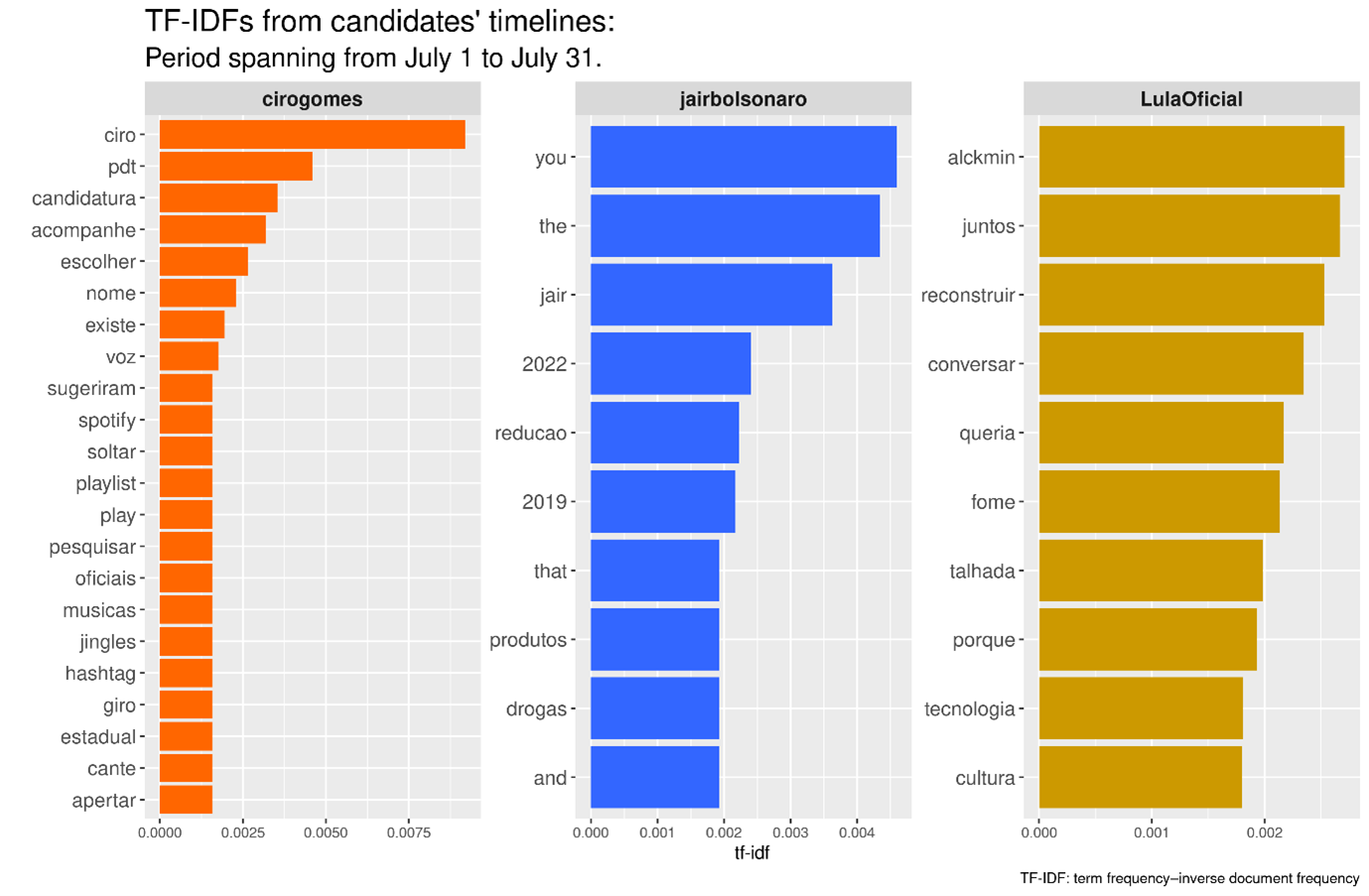 In Figure 3, the TF-IDF (term frequency-inverse document frequency) reflects the frequency of words in candidate timeline tweets that are infrequent for the three candidates overall. Thereby:

● In Lula’s profile, the novelty in July is in the terms “Alckmin” (referring to his partner, the vice presidential candidate), “together” [“juntos”], “rebuild” [“reconstruir”], “talk” [“conversar”], “technology” [“tecnologia”], “culture” [“cultura”], “wanted” [“queria”] and “Talhada” ( “Serra Talhada” is a mountain location close to the region of Garanhuns in Pernambuco State. They received a visit from the candidate whose images of the crowds went viral on the website in July). The emphasis that remained regarding June was the theme of “hunger” [“fome”].
● Bolsonaro’s profile features, again, emphasis on the English words “the”, “you”, “that”, and “and” (referring to tweets in response to actor Leonardo Dicaprio), as well as highlighting the years 2019 (which maintains since April, showing an attempt to emphasize the government’s achievements in the year before the pandemic) and 2022. The terms “reduction” [“redução”], “products” [“produtos”] and “drugs” [“drogas”] are also highlighted. Terms in English also appeared in the previous month, but due to the president’s participation in the “IX Summit of the Americas, 2022”.
● In Ciro’s profile, the novelty in July is a spraying of terms. “Ciro”, “pdt” (in reference to his party, “Partido Democrático Trabalhista”), “candidacy” [“candidatura”], “follow” [“acompanhar”], “choose” [“escolher”], “name” [“nome”], “exists” [“existe”], “voice” [“voz”], “suggested” [“sugeriram”], “spotify”, “drop” [“soltar”], “playlist”, “play “, “search” [“pesquisar”], “officials” [“oficiais”], “songs” [“músicas”], “jingles”, “hashtag”, “spin” [“giro”], “state” [“estadual”], “sing” [“cantar”] and “press” [“apertar”]. The terms “spotify”, “playlist”, “play”, “spin” [“O Giro do Ciro” refers to calls with takes and campaign visits], all relate to the candidate’s media campaign. 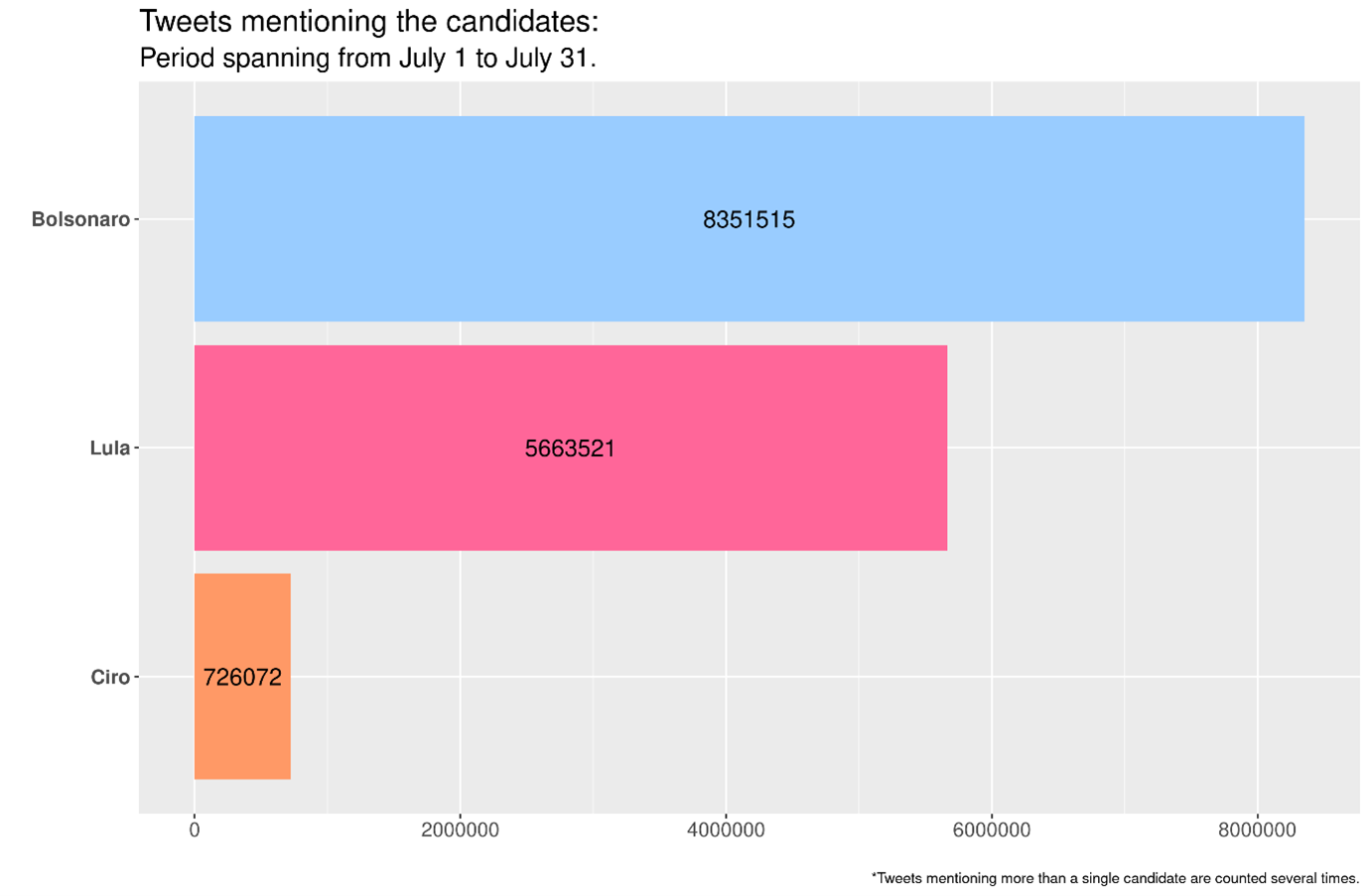 During the previous month, the interactions of all the candidates intensified, that is, they were all more assiduously on Twitter. In the daily evolution of tweets (Figure 5) it can be seen that Ciro has the lowest number of daily interactions and Bolsonaro the highest number of daily interactions (except on July 2nd and 3rd, when the number of tweets by Lula was slightly higher). The large number of tweets mentioning Bolsonaro on the 18th and 19th of July refers to the mention of the leader of a criminal faction on the 18th and the reduction in the price of gasoline on the 19th when the president stated that “Brazil will have a of the cheapest gasoline’ (sic) in the world” [ “‘uma das gasolina’ (sic) mais barata do mundo”]. 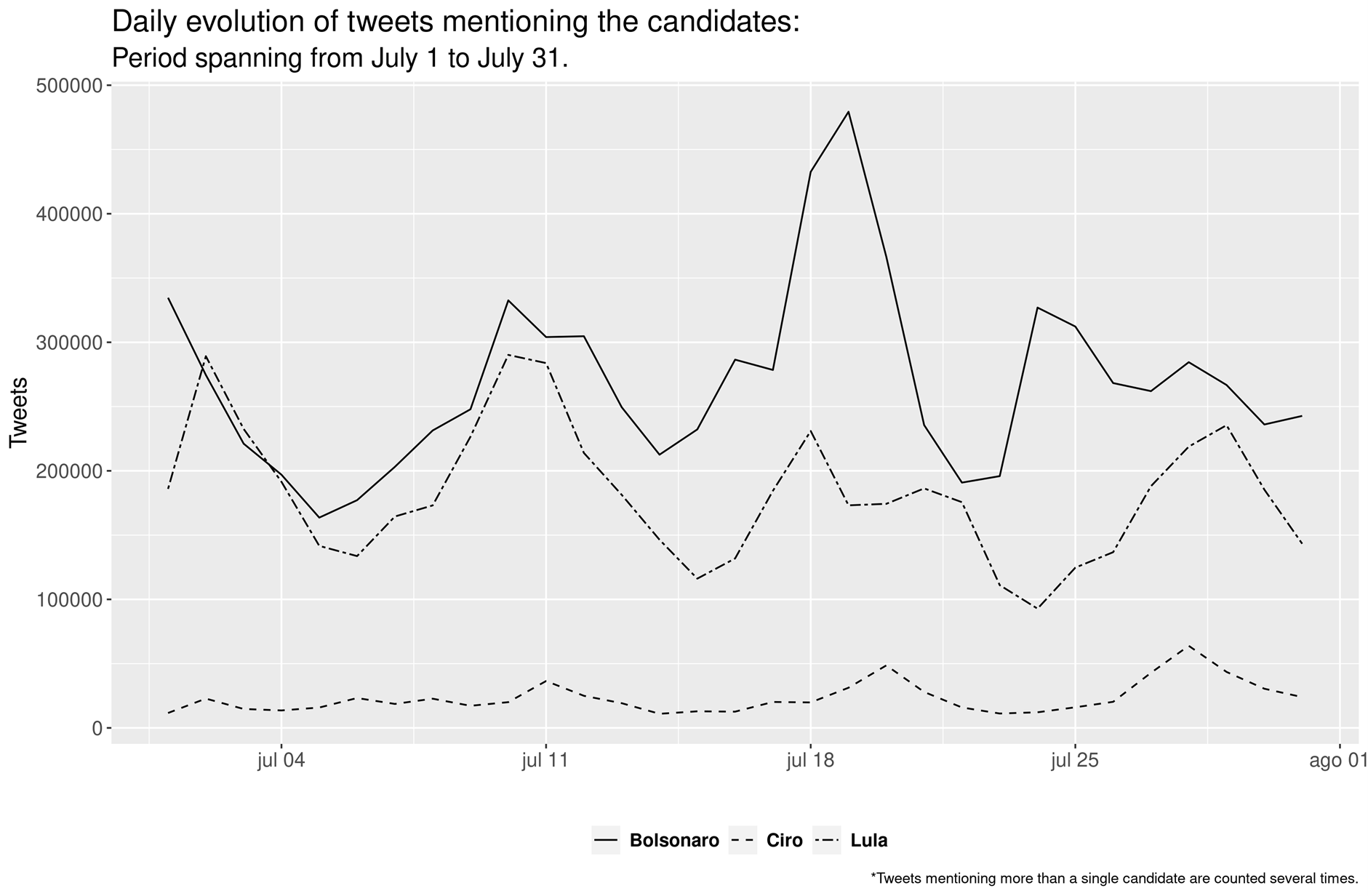 Finally, we present below three-word clouds with, excluding stop words, the top 100 words used in the interactions of Twitter users in July. For better visualization, each candidate’s name was taken from its cloud.
A word cloud is a graphical representation of the most frequent words within a text or set of texts.
Next, we present three-word clouds, where each one corresponds to a candidate. It is important to point out that each candidate’s name was taken from its cloud, for better visualization of the associated words. It should also be noted that each cloud reflects the 100 most relevant words associated, excluding stop words, to each candidate in the interactions of Twitter users on the thirty-first day of July.
In text analysis, stop words are quite common words such as “and”, “from”, “the”, etc. These words are not useful for analysis and are often removed before analysis. 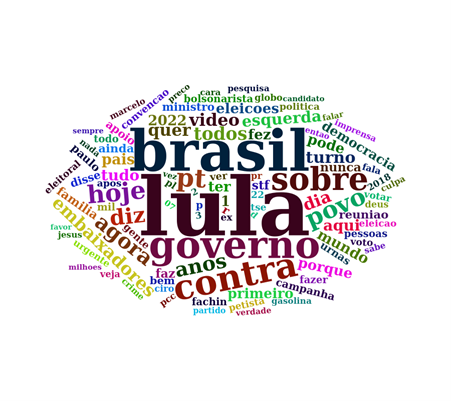 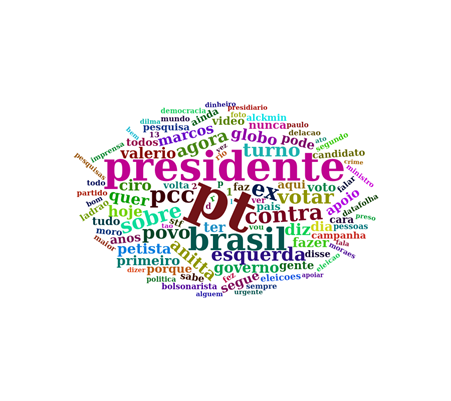 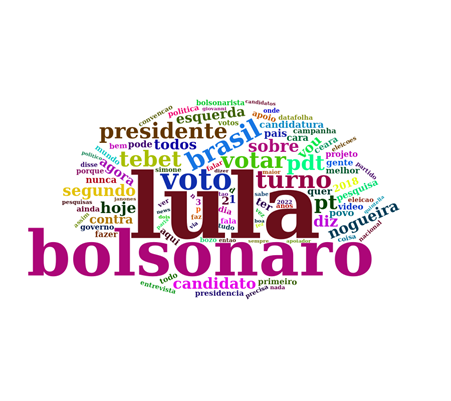 The sentiment of each tweet was constructed by identifying the sentiments of the basic units (the words) using the Oplexicon v3.0 and Sentilex dictionaries, from the LexiconPT Package. Thus, each word found in the dictionaries receives 1, -1, or 0 scores, depending on whether the feeling is positive, negative, or neutral, respectively. Words not found in the dictionaries also receive a 0 score. The values assigned to each word within the tweet were added up, and depending on the result positive, negative, or zero, the sentiment of the tweet is classified. In Figure 9, feelings (Negative, Neutral, and Positive) are presented in percentages per candidate. It is possible to highlight a balance between the feelings expressed in the tweets of the three candidates. Such data will be monitored over time comparatively. This is a portrait, a sentimental snapshot of June on Twitter. This is a picture, a sentimental snapshot of July on Twitter. When analyzing proportionally the number of tweets mentioning each candidate, Ciro had the lowest percentage of tweets with negative sentiment and the highest percentage of tweets with positive and neutral sentiments. Candidate Lula had the highest percentage of negative tweets and the lowest percentage of positive tweets. Bolsonaro had the lowest percentage of neutral tweets.

Figure 9: Sentiments of tweets per candidate 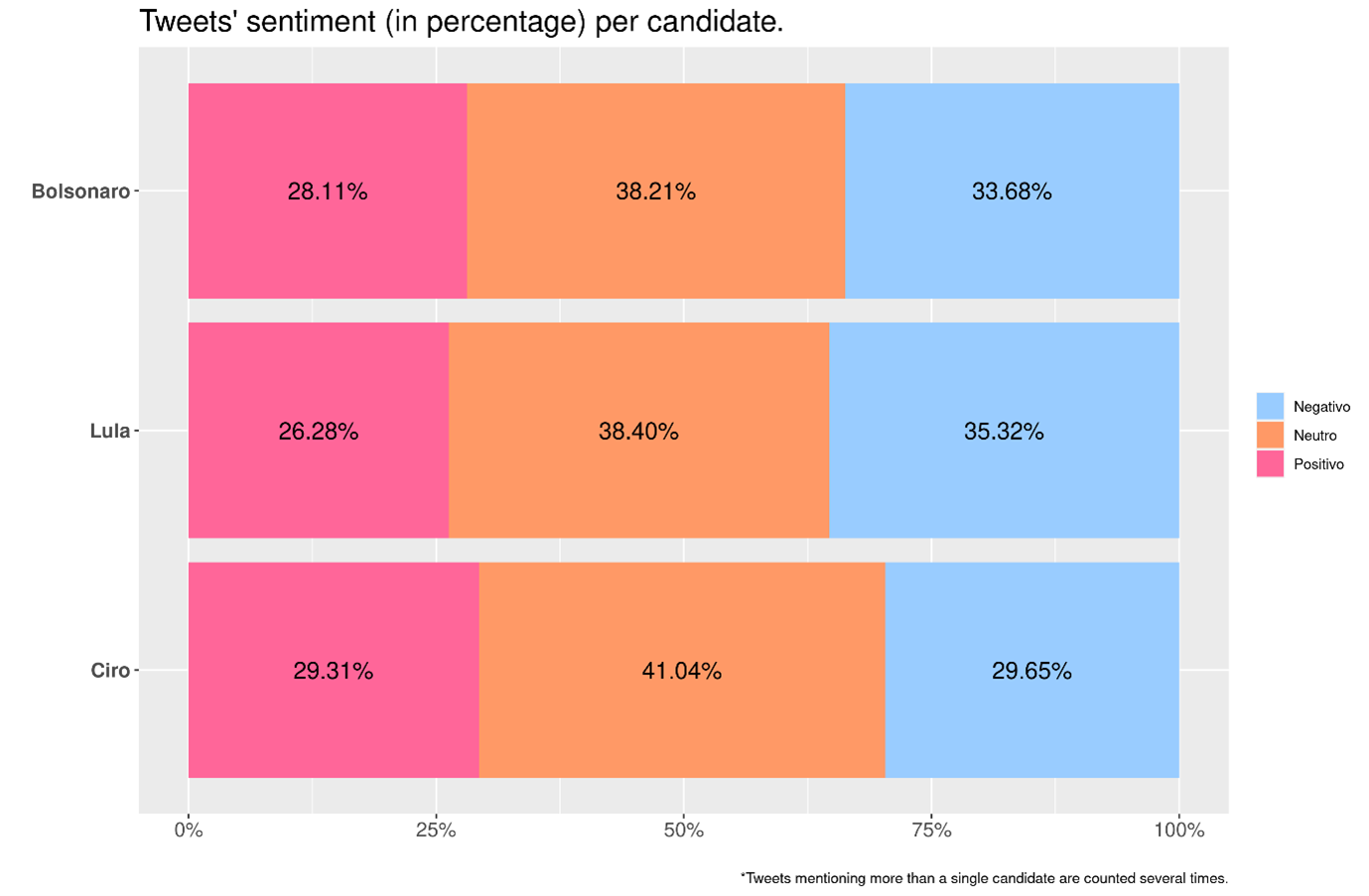 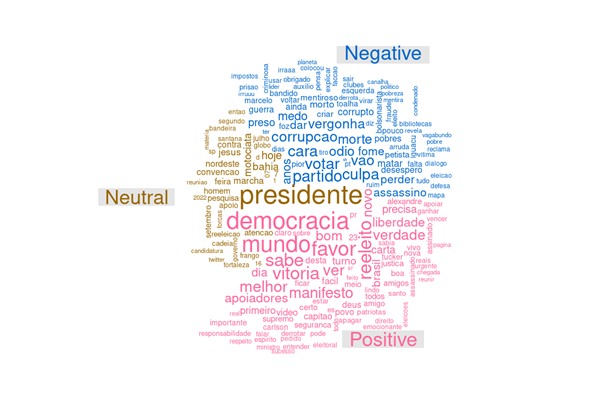 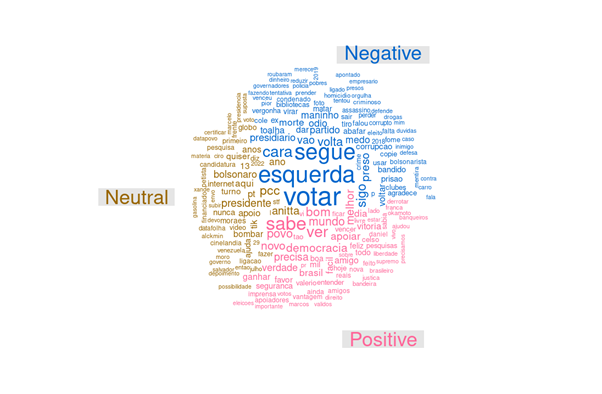 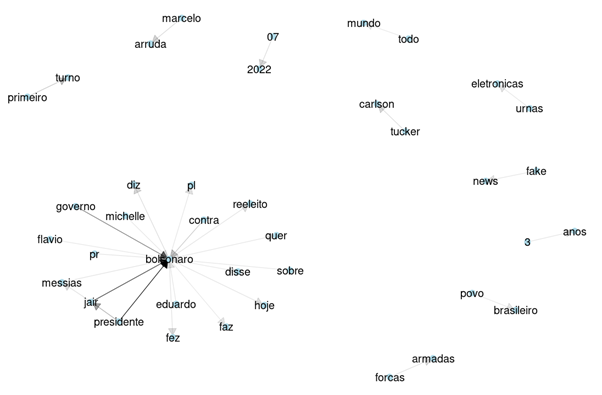 Bolsonaro: among the most frequent bigrams we have “government => Bolsonaro”, “Jair =>Bolsonaro” and “president=> Bolsonaro”. Following those, in sequence, we can notice Michelle => Bolsonaro ( this can be understood in connection with the greater exposure/presence of the First Lady, as a strategy to reach the female audience and evangelicals groups in his campaign), “urns => electronic”, “Eduardo=> Bolsonaro”, “fake=>news”, “forces => armed”, “Marcelo => Arruda”****, “first => turn”.
**** Marcelo Arruda was a member of the Workers’ Party (PT) of Brazil, killed and shot by a policeman, when the victim was celebrating his 50th birthday, while the officer was shouting slogans in favor of the current president and candidate, Jair Bolsonaro. The tragedy occurred in the southern city of Foz do Iguaçu, a western region of Paraná, at the hands of the federal penitentiary agent Jorge José da Rocha Guaranho, who first went to the place and after 20 minutes, returned armed and began to shoot the PT leader, whose party was being held with themes dedicated to the PT and Lula. 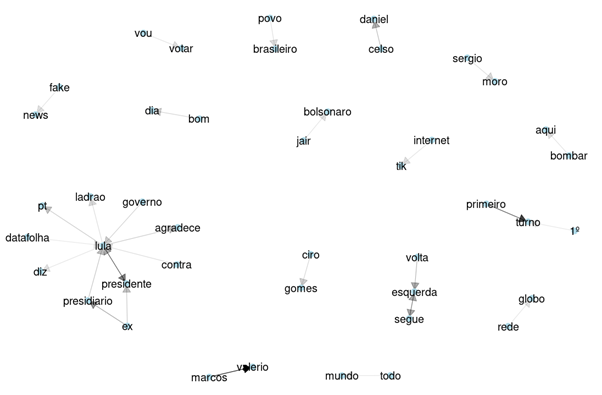 *****Marcos Valerio is one of the main accused in the Mensalão scandal and was found guilty of bribery, embezzlement, money laundering, tax evasion, and conspiracy. In October 2012 he was given a sentence of 40 years 2 months and 10 days imprisonment and a fine of R$2.72 million.
******Sérgio Moro is an ex-judge that was involved in ethical violations and legally prohibited collaboration between him and prosecutors who convicted and imprisoned former Brazilian President Luiz Inácio Lula da Silva on corruption charges — a conviction that resulted in Lula being barred from the 2018 presidential election. 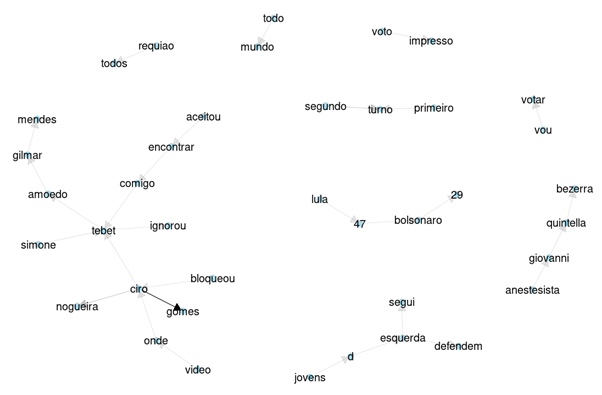