The ones who are alive witnessed history being made on 6th January 2021. On this day, one of the eldest and most stable democracies in the world was shaken up to the core. The U.S. Capitol was viciously overrun by pro-Trump rioters who stopped the joint session of Congress that had taken place to count the votes of the 2020 election and officially declare who is going to be the next president of the United States of America. Chaos and a tragedy unfolded due to a violent mob’s invasion of the U.S. Congress, a symbol of the American democracy. As a result, Congress was hastily evacuated as the angry mob broke into offices and confronted fiercely the police. Sadly, a woman was shot during the confusion inside the Capitol and died a few hours later. 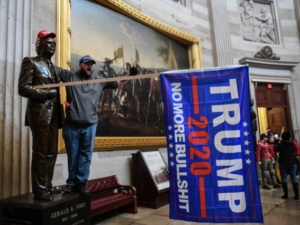 Even if many of us are shocked by this disturbing event, which many are calling rightly an insurrection, we cannot say that we have not seen this coming. Even before the U.S. general election in November 2020, Trump had given all the signs that he would not concede in case he lost the presidency. After two months since the election has taken place, he still refuses to acknowledge that he lost the election, and Joe Biden won. After calling the election a fraud and his failed attempts to pressure secretaries of states to recount the votes, Trump incited his supporters (the rioters) to invade the U.S. Capitol by saying earlier on that day: “We will never give up, we will never concede. We will stop the steal. We will have to fight much harder. We´re going to walk down to the Capitol.[1]” In consequence, on 6th January this year, we witnessed Trump’s blind hankering to power posing what I think (and hope) is the last threat to American democracy.

I hope this is the last threat for the sake not only of the American democracy but also of all democracies around the world, especially those young and already undermined by many reasons. Without question, the United States is an example of a lot of things. In politics, this is particularly true as the U.S.A. has the longest-standing democracy in the world. Unfortunately, the message that Trump and his supporters (citizens and also politicians who stand behind his ideas of fraud even after the insurrection) sent to the world on 6th January was clear: losers can do ANYTHING to override the will of the people. Now imagine the impact that this dangerous message would have in underdeveloped countries which already have fragile democracies and/or demagogue[2] leaders. Probably the consequences would be even more devastating since their institutions are likely to be weaker than in the U.S.A.

Personally, in the light of these sorrowful events that we have seen in the U.S., I fear for Brazil, where general elections will be held in 2022 to choose its president. By now, everybody must know that the Brazilian president, Jair Bolsonaro, is a proud Trump supporter and has been trying to follow his lead. Bolsonaro has repeated many times in the past two months Trump’s allegations of fraud of the U.S. elections (without providing any evidence). When asked about his views on the pro-Trump riots, he replied: “You know I am connected to Trump, right? So, you already know my answer.” By following Trump’s example, Bolsonaro has also been casting doubt on the Brazilian voting system, which gives us a clue that he might do anything to remain in power if he loses the election. According to him, “if we do not have paper ballots [in Brazil’s 2022 election], we can forget the election.[3]” It is worth noting that the return to paper ballots in Brazil is only possible through the amendment of the Constitution itself. In recent years, this issue has been a subject of intense debate between the executive, legislative, and judiciary powers[4]. 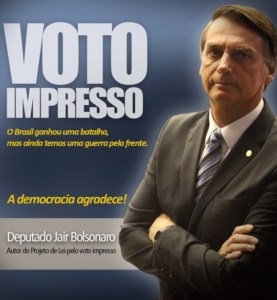 Brazil introduced electronic voting machines in the mid-1990s. The adoption of a completely electronic voting system in Brazil was the solution proposed by the Electoral Court to put an end to various occurrences of tampering with the voters’ will (Nicolau 2015). This introduction not only reduced the potential for fraud during the voting process but also incorporated into the electoral process of millions of new voters. By making it easier to cast a vote, especially for less-educated voters, electronic ballots increased de facto enfranchisement, that is, suffrage (Zucco and Nicolau 2016; Nicolau 2015; Hidalgo 2010). Besides, it has been widely addressed that electronic voting has reduced null and blank votes, particularly in poorer regions (Zucco and Nicolau 2016; Nicolau 2002; Fujiwara 2015). Despite the challenges posed by electronic voting systems, their positives outcomes are many, and hence it is foreseen a more widespread adoption around the world.

By putting under suspicion (without any evidence) the legitimacy of the electoral system in their countries, Trump and Bolsonaro endanger the democratic institutions and support the huge network of fake news, which have been seriously impairing political and social arenas. Unfortunately, violence and lies are the last refuges of authoritarian and demagogue rulers. Trump and Bolsonaro, even before their elections, had shown that they would be this kind of ruler, even if elected in a democratic country. As noted by Steven Levitsky and Daniel Ziblatt in their prominent book How democracies die (2018), “Authoritarians seeking to consolidate their power often reform the Constitution, the electoral system, and other institutions in ways that harm or weaken the opposition, reversing the command of the field and turning the game situation against rivals”[5] (p. 103).

However, despite their similarities, Trump and Bolsonaro are in countries that have different contexts, which is crucial to understand what has happened up until now and predict the future. Despite the alarming problems shown by the U.S., the country still has reliable institutions, and often its Constitution is placed above everything and everybody. The discourse of an American congressman after the U.S. Capitol riot last week rightly represented this idea by condemning the invasion: “On this day we witnessed people taking down the American flag and putting in its place a Trump flag”. Sadly, I cannot say the same thing about Brazil’s case, not under Bolsonaro’s administration. Almost every day Bolsonaro (and several of his ministers and allies) diminishes and attacks Brazilian institutions and the accomplished rights since the 1988 Constitution. While in the U.S. Trump’s recklessness seem hard to be normalized, I am afraid that in Brazil Bolsonaro’s recklessness is not far from this due to the inaction of the legislative and judiciary powers in face of his constant attacks on democracy. My concern is whether just a political discourse against his words and actions is enough to stop his lunacy.

Jayane Maia is a research fellow at the German Institute for Global and Area Studies (GIGA) and a doctoral student at the University of Hamburg. She holds a scholarship from the Deutscher Akademischer Austauschdienst (DAAD). Email: jayane.maia@giga-hamburg.de.

[2] Given that this word has the utmost importance in this text, knowing its definition is worthwhile: demagogue is “a person, especially a political leader, who wins support by exciting the emotions of ordinary people rather than by having good or morally right ideas” (Cambridge Dictionary).

[5] Own translation from the Portuguese version of the book.