Daily tweets spanning from September 1st to September 30th were collected for each one of the three main candidates in the Brazilian presidential election. Tweets were collected from both candidates’ timelines and Twitter users mentioning the candidates, totaling more than  34.5 million tweets, the largest volume of monthly data obtained since the beginning of the survey. Data were extracted through a Twitter API used exclusively for academic purposes and analyzed using R software.

Herein is the updated data (September versus August, data as of November 29th, 2022) of Twitter followers for each of the candidates.

In Image 1, we report the number of tweets on the candidates’ timelines, among the three that were part of our survey: Lula, Ciro, and Bolsonaro, according to the frequency with which the candidates tweeted in September. 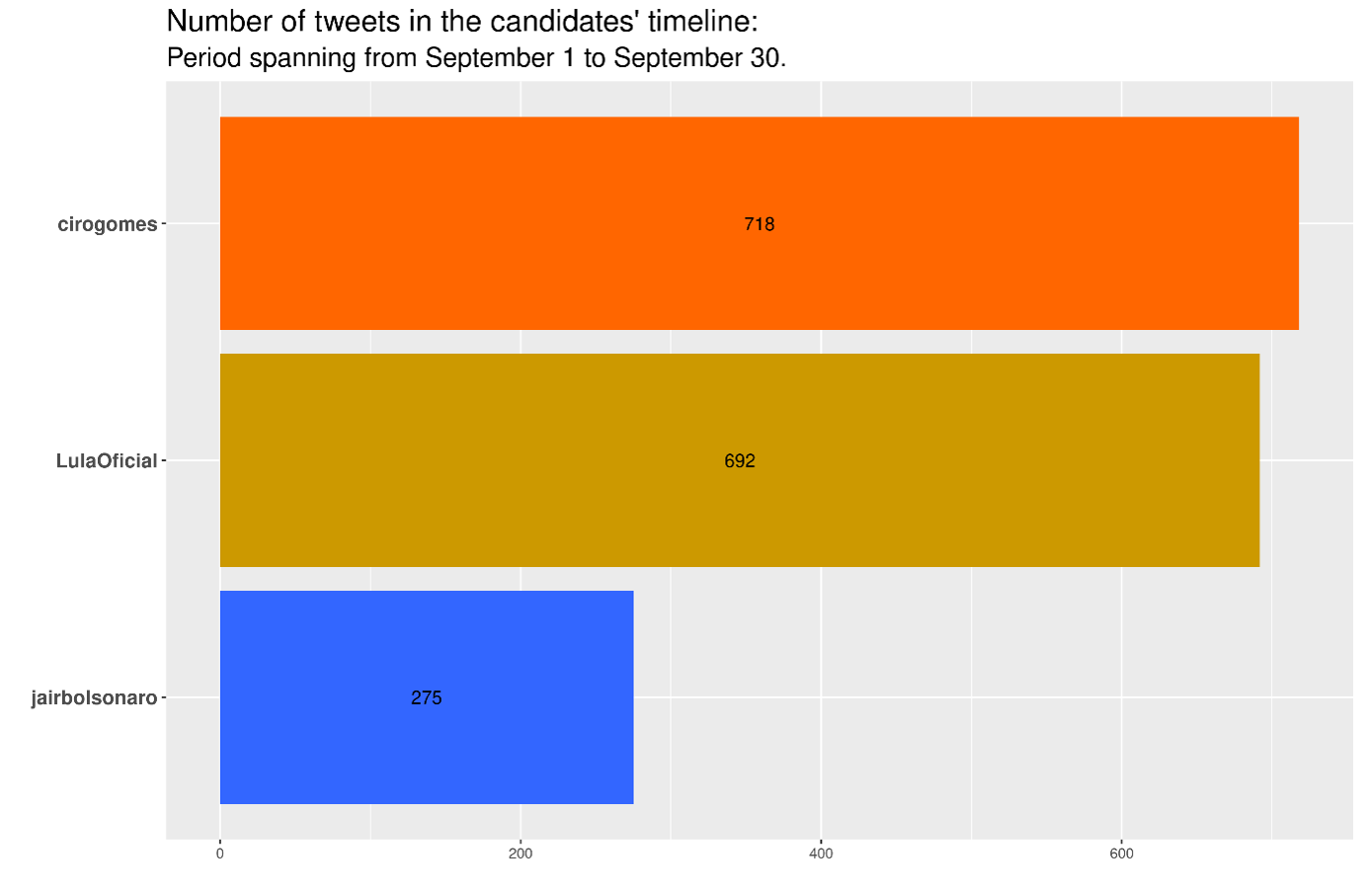 In continuity with the overall performances observed the previous month, Ciro Gomes was the most active on the social network, followed by candidates Lula da Silva and Jair Bolsonaro, respectively. In general, the three candidates increased their posting activity. 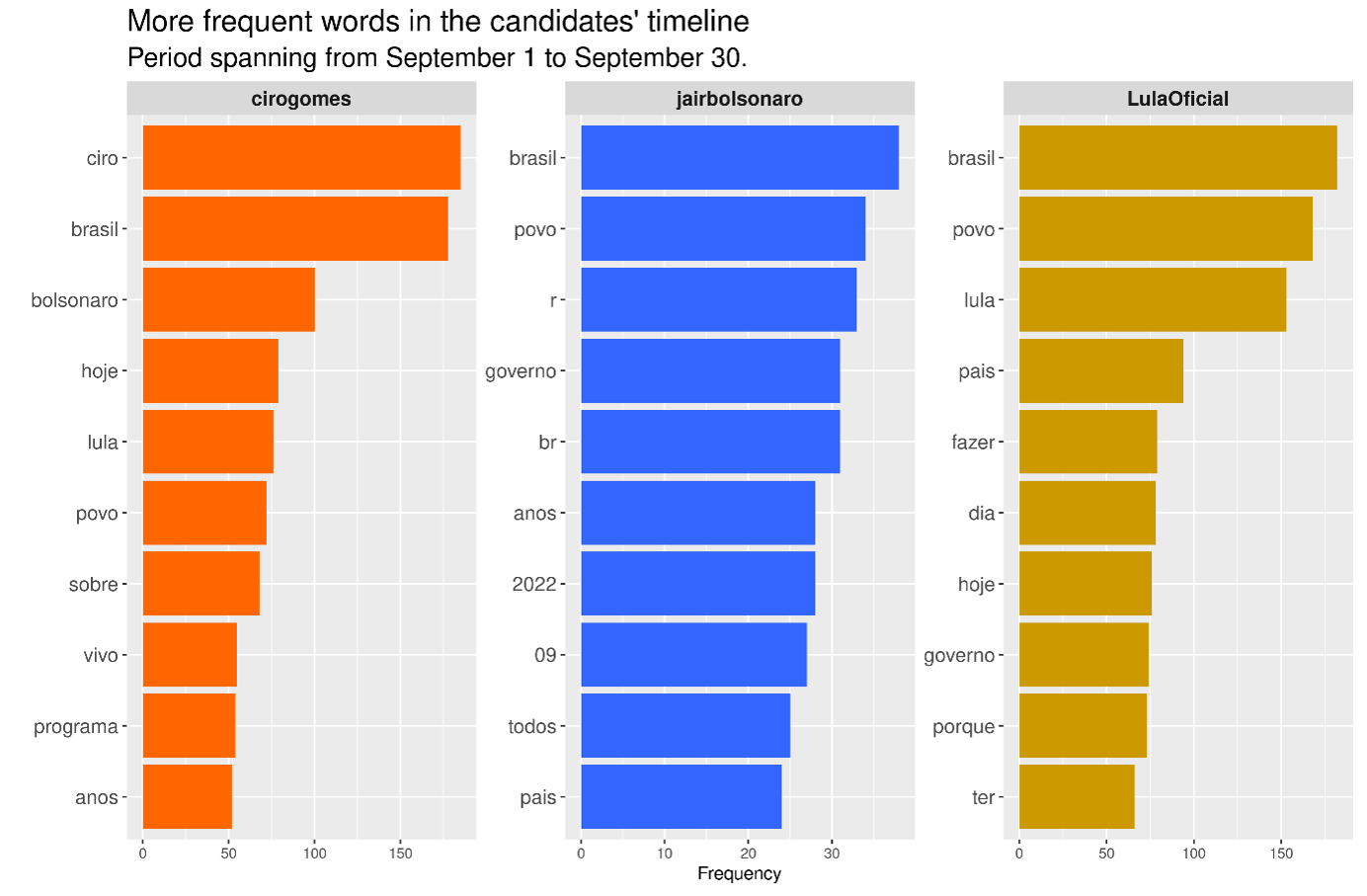 The analysis of the most frequent words in candidates’ timeline tweets (Image 2) allows us to present a dominant panorama of subjects they deal with. In common, the three profiles present the terms “people” [“povo”] and “Brazil”, the novelty is the coming back of the word “people”, as a share. The word “today” [“hoje”] continues appearing in Lula and Ciro’s profiles, although now the intersection observed between Ciro and Bolsonaro comes with the word “years” [“anos”]. If we observe Bolsonaro’s profile itself, the terms “government” [“governo”], “country” [“país”], and “all” [“todos”] stands out, and the mention of values in Reais [“r”] and “2022” continue to appear, also with a mention to the number “9”, probably referring to the current month. In Lula’s profile alone, it can be found the emphasis on the verbs “to do” [“fazer”] and “to have” [“ter”] and the nouns “country” [“país”], “day” [“dia”], “today” [“hoje”], “government” [“governo”] and the connective “why” [“porque”]. Those words denote a trend of continuity on the propositional character found until August, with the novelty of the term “why”, which emphasizes the explanatory activity. In Ciro’s profile, the concern to name the other two candidates remains, as to himself, and as observed since April. It is possible to highlight in the consolidated for the month of September, the mentions of terms like “about” [“sobre”], “program” [“programa”], “alive” [“vivo”], and “years” [“anos”]. 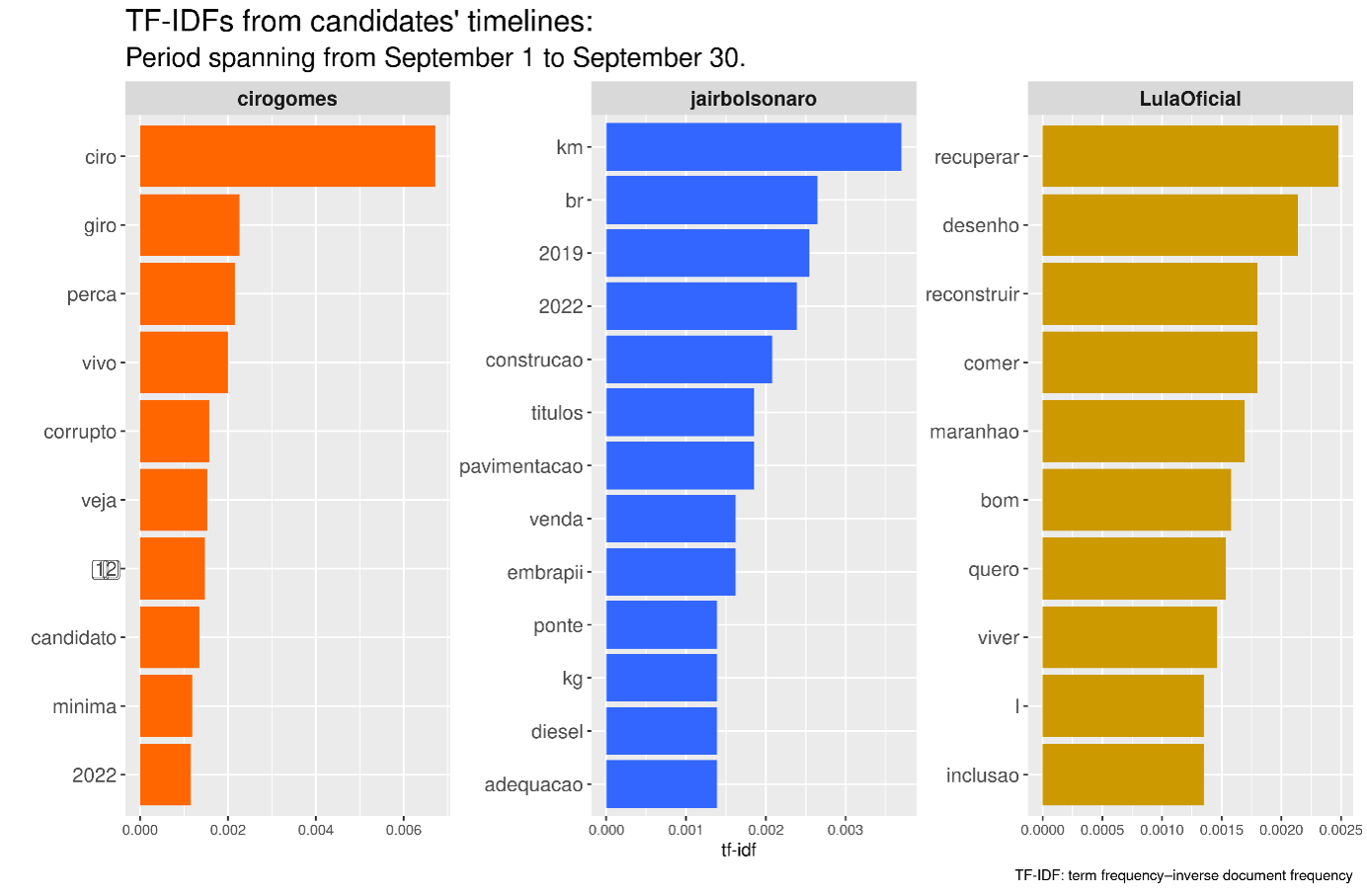 The total number of tweets mentioning each candidate is displayed in Figure 4 and the daily evolution is in Figure 5.

Next, in Figure 4, we present, in descending order (from the most cited to the least cited), the total number of tweets that mentioned the name of each candidate surveyed in the month of August: Bolsonaro, Lula, and Ciro.

To collect the tweets mentioning the respective candidates, the words “Bolsonaro”, “Ciro” and “Lula” were used as search criteria. Tweets mentioning “Ciro Nogueira” were excluded from the analyzes referring to candidate Ciro. 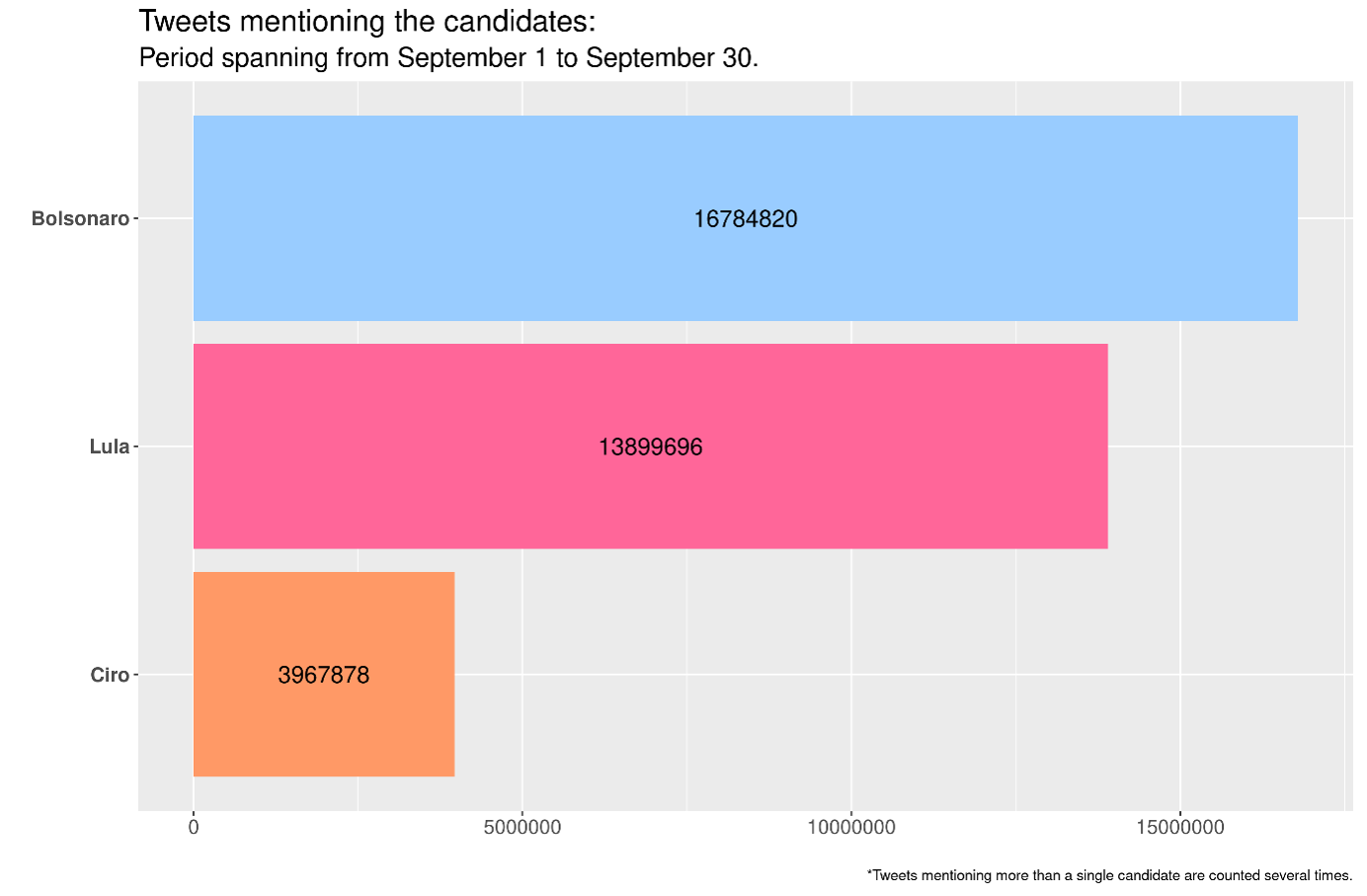 The volume of tweets about the candidates continues in the same order as in previous months: Bolsonaro, Lula, and, finally, Ciro.

The three candidates show a significant increase in the volume of user iterations mentioning each one of them. However, the increase is lower than that observed in the previous month.

The daily evolution of tweets mentioning each candidate is shown in Image 5. The biggest highlight is the intense number of tweets, mainly, at the end of the month, between candidates Jair Bolsonaro and Lula da Silva, which converges with the increase of their dispute in the country’s electoral campaign political scenario. 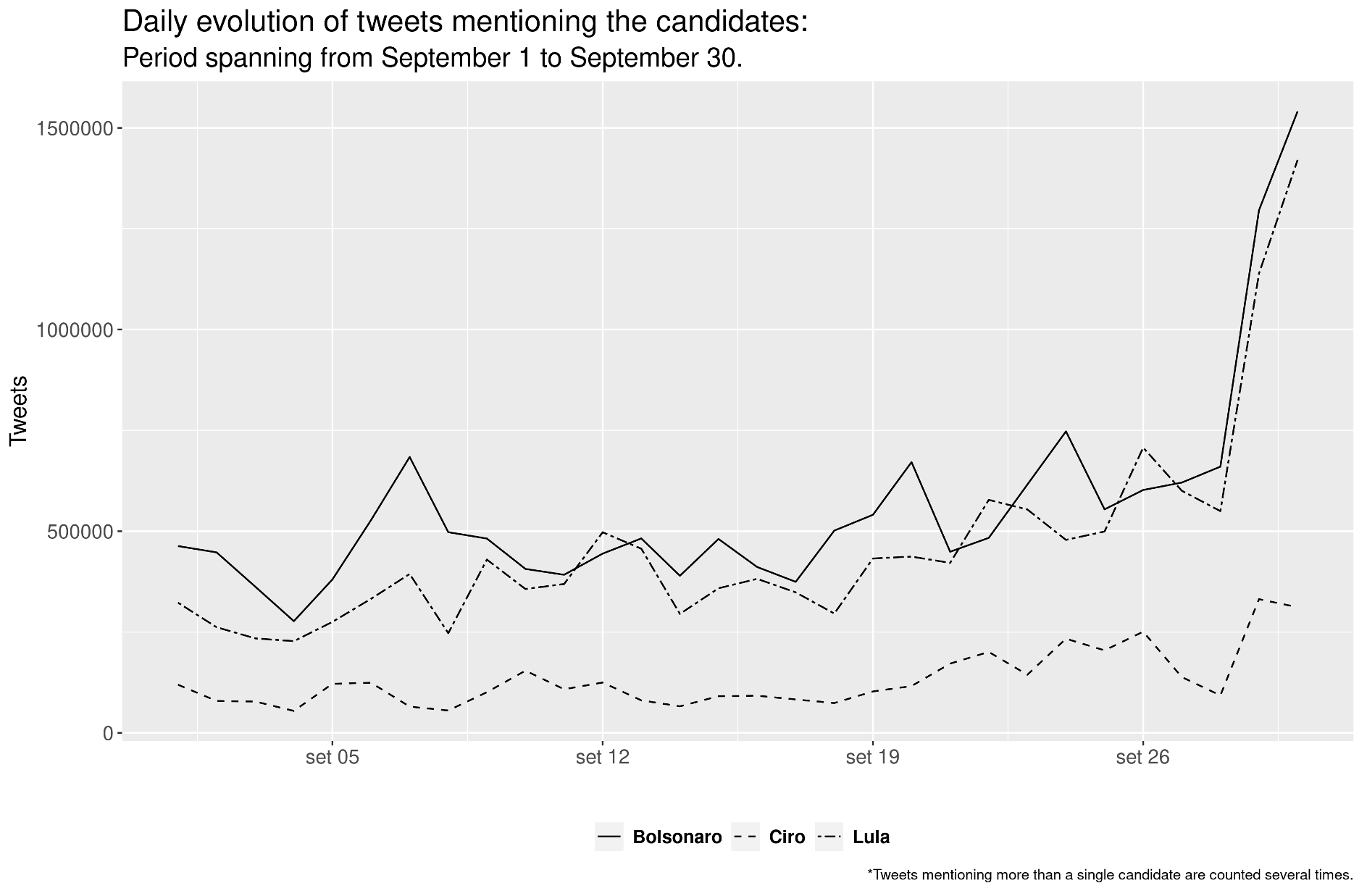 Finally, we present below three-word clouds with, excluding stop words, the top 100 words used in the interactions of Twitter users in September. For better visualization, each candidate’s name was taken from its cloud.

A word cloud is a graphical representation of the most frequent words within a text or set of texts.

Next, we present three-word clouds, where each one corresponds to a candidate. It is important to point out that each candidate’s name was taken from its cloud, for better visualization of the associated words. It should also be noted that each cloud reflects the 100 most relevant words associated, excluding stop words, to each candidate in the interactions of Twitter users on the thirtieth day of September.

In text analysis, stop words are quite common words such as “and”, “from”, “the”, etc. These words are not useful for analysis and are often removed before analysis. 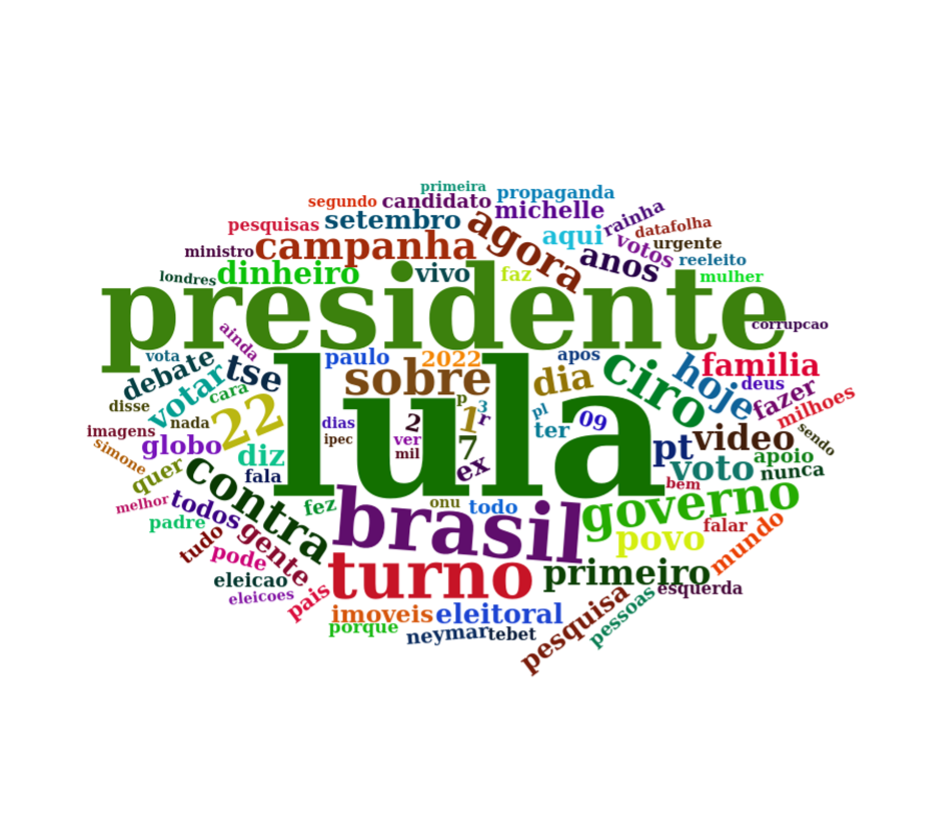 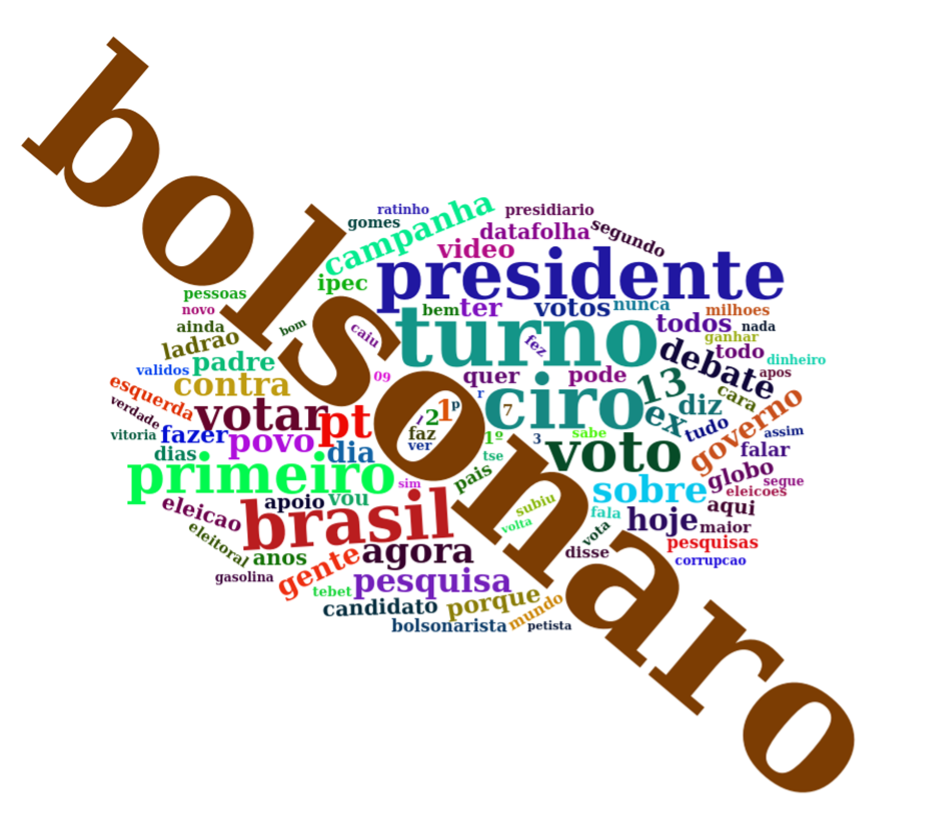 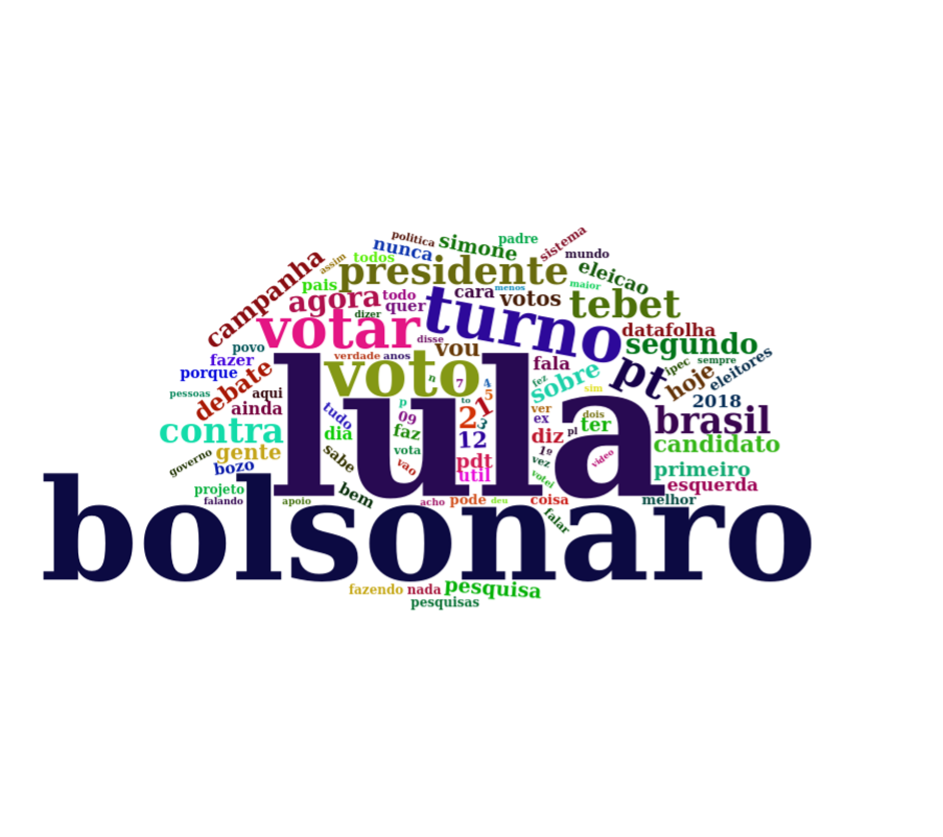 *** In a broader sense. the electoral process in Brazil concerns the organizational phases of elections, also comprising a brief period thereafter. It is organized by the Electoral Court (EC), at the municipal, state, and federal levels. At the federal level, the EC has the Superior Electoral Court (TSE), headquartered in Brasília, as its highest body. In each state of the Federation and the Federal District, there is a Regional Electoral Court (TRE), and judges and electoral boards. See https://international.tse.jus.br/en/elections/election-process-in-brazil

****Now under the name MDB – “Brazilian Democratic Movement”, this Brazilian party was founded in 1965 as part of an “enforced” two-party system by the Brazilian military dictatorship, providing an “official controlled opposition”. With the redemocratization and political opening, in 1980 the former members of the MDB created the Brazilian Democratic Movement Party [“Partido do Movimento Democrático Brasileiro”, PMDB]. However, after Dilma’s impeachment approval with the party support in 2016, and the election of Bolsonaro in 2018, the party adopted back its old name, in the very same election year. See https://www.tse.jus.br/comunicacao/noticias/2018/Maio/aprovada-mudanca-do-nome-do-partido-do-movimento-democratico-brasileiro-pmdb

The sentiment of each tweet was constructed by identifying the sentiments of the basic units (the words) using the Oplexicon v3.0 and Sentilex dictionaries, from the LexiconPT Package. Thus, each word found in the dictionaries receives 1, -1, or 0 scores, depending on whether the feeling is positive, negative, or neutral, respectively. Words not found in the dictionaries also receive a 0 score. The values assigned to each word within the tweet were added up, and depending on the result positive, negative, or zero, the sentiment of the tweet is classified. In Image 9, feelings (Negative, Neutral, and Positive) are presented in percentages per candidate. It is possible to highlight a balance between the feelings expressed in the tweets of the three candidates. Such data will be monitored over time comparatively. This is a picture, a sentimental snapshot of September on Twitter. 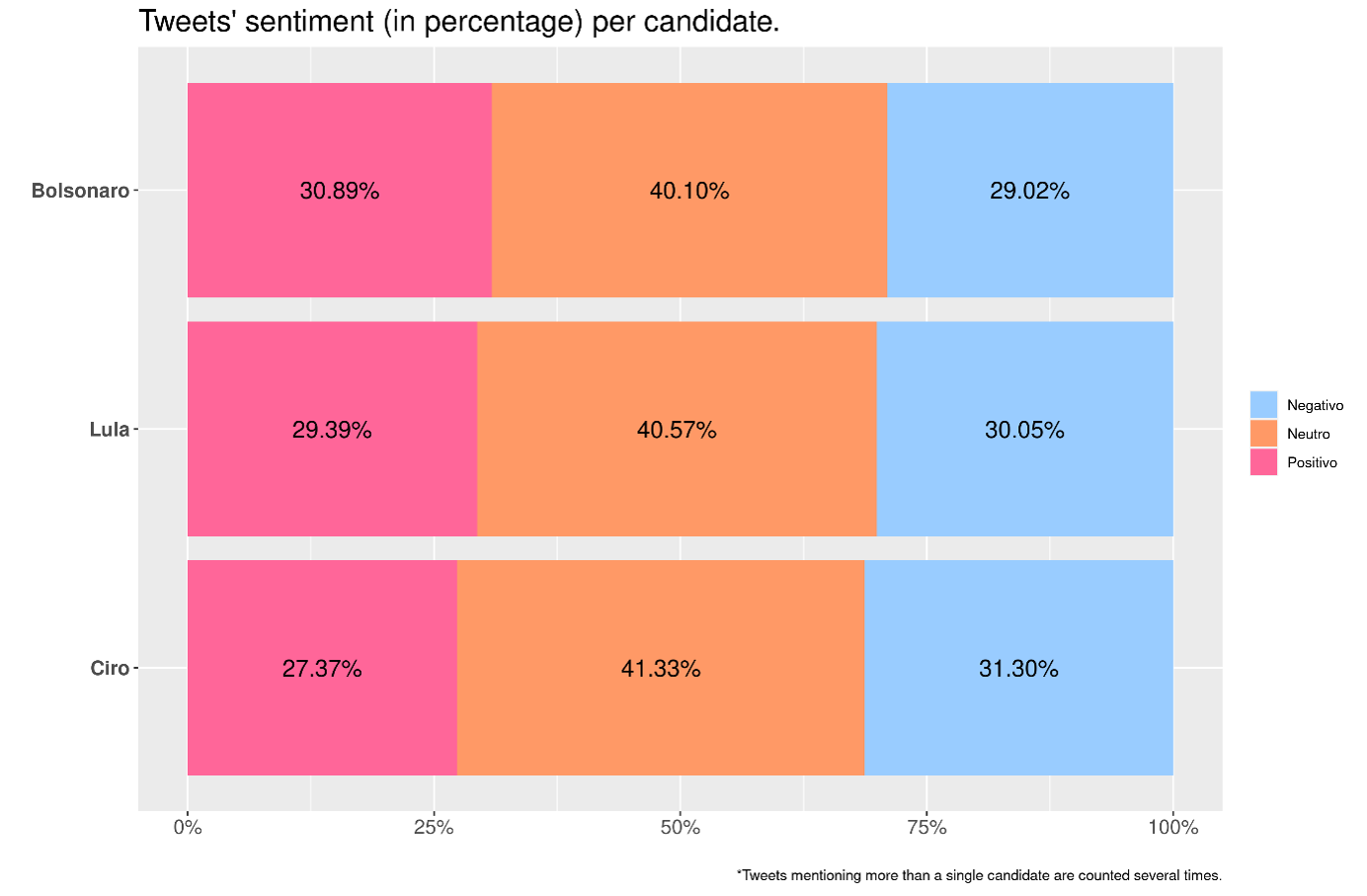 The word clouds consider the 200 most frequent words. 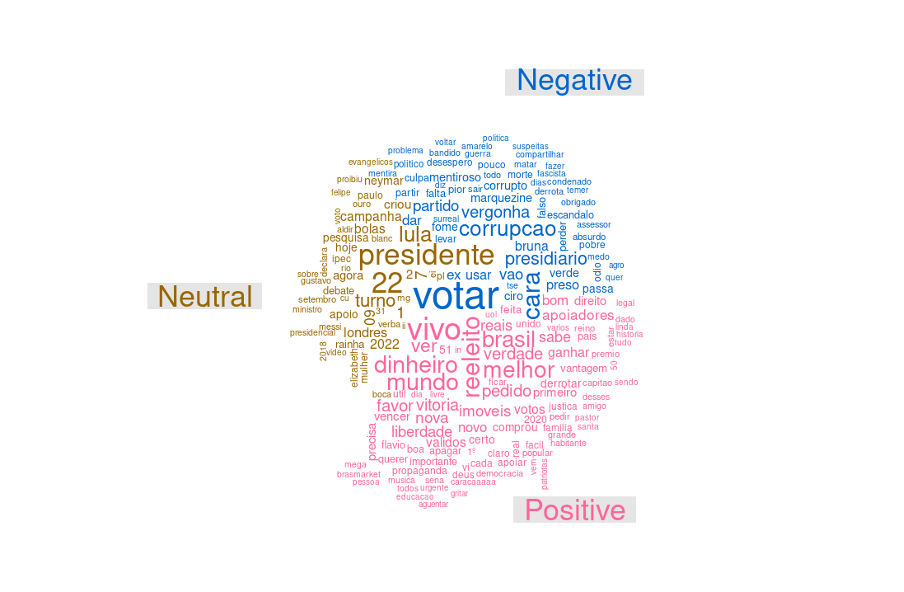 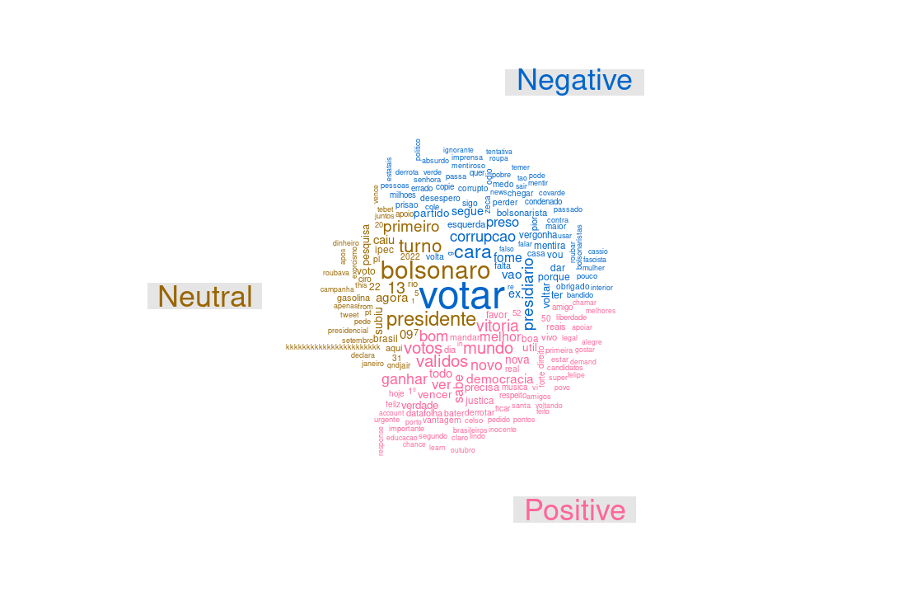 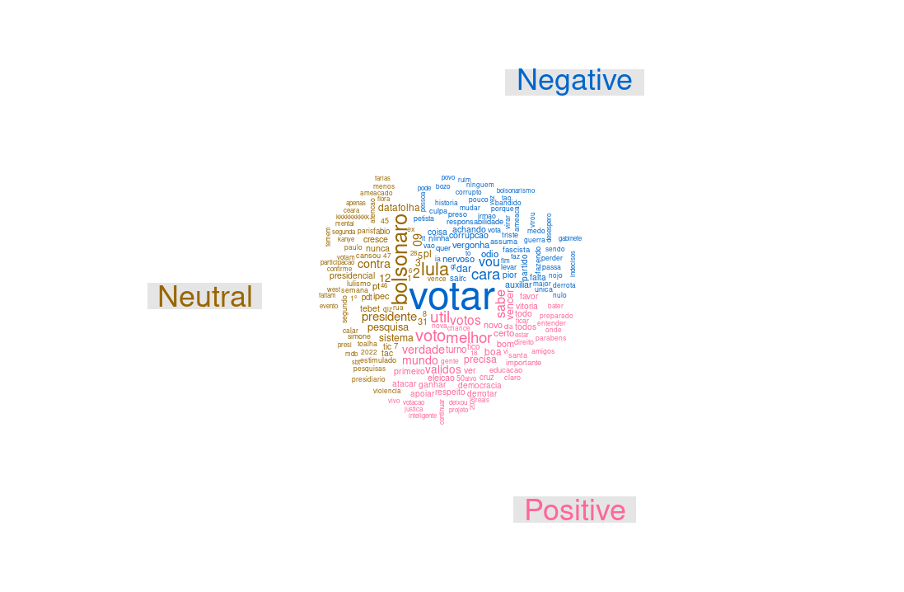 The presentation of this dataset aims to contribute to interpretations about the movement on Twitter of presidential candidates in the 2022 elections in Brazil, as well as about what is said about them in the interactions of users of the platform throughout the month of September, in comparison to what was found August, July, June, May, and April. This is ongoing research work and will be refined over the months leading up to the 2022 election.