A decline in the quality of democracy

After the first democratic phase in Brazil came to an end with a military coup in 1964 and the subsequent military regime lasted until 1985, the country succeeded in establishing a democratic regime again starting in 1986 (Kestler/Krause 2014). Looking at the development of democratic quality since then, the data from the democracy matrix (Lauth 2004, 2015) show that Brazil can almost consistently be described as a deficit democracy between 1986 and 2020. In 2003 and 2004, it was even classified as a functioning democracy. Nevertheless, Figure 1 shows that the quality of democracy has deteriorated again since 2016. The election of Jair Bolsonaro in 2018, who can be characterized as a populist politician from the political right with a strong connection to the military (Bennech et al. 2021; Chagas-Bastos 2019: 94), seemed not to strengthen democracy in the years to come. 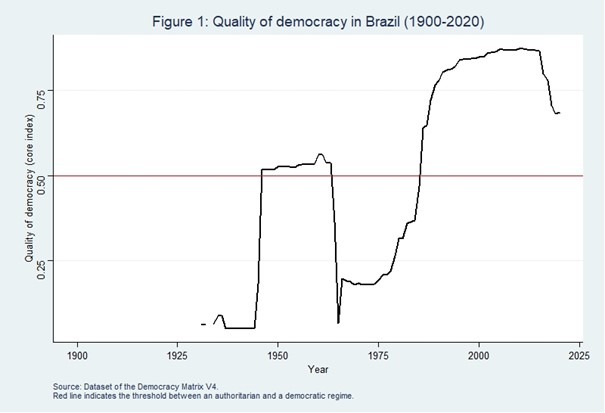 Looking at the development of the political structure is only one way to evaluate the consolidation of democracy. Both Diamond (1999) and Merkel (2010) emphasize the importance of political culture for the stability of a political regime. If the rules of the democratic game are not broadly anchored in society, then democracy stands on feet of clay. Diamond even provides explicit criteria for how strong the support for democracy should be in society: “More than 70 percent of the mass public consistently believes that democracy is preferable to any other form of government and that the democracy in place in the country is the most suitable form of government for the country. No more than 15 percent of the public actively prefers an authoritarian form of government.” (Diamond 1999: 69)

The development of the democratic political culture

Studies in Brazil that have analyzed survey data on support for democracy do not point to a good trend. Carrión (2008: 36), using data from the Americas Barometer (2006-2007), showed that just under 51 percent of respondents in Brazil could be described as liberal democrats, i.e., as supporting not only democracy but also being in favor of limiting the power of the executive (presidents, prime ministers). Lagos (2008: 114-116) used Latinobarometró data to show that support for democracy increased between 1995 and 2007, but was among the lowest in the region, at only 43 percent in 2007. At the same time, support for authoritarian alternatives averaged 19 percent between 1995 and 2005 and was still 17 percent in 2007. A more recent study by Fuks et al. (2018: 13), using data from the 2012 Americas Barometer, studied support for democracy between generations. Their findings revealed that 69.3 percent of respondents who had lived under the military regime supported democracy, while only 64 percent of those who grew up only in Brazilian democracy supported democracy. This supports the thesis that experiencing authoritarian rule leads to lesser support for it. But still, nearly a third of the respondents didn’t support democracy.

If we compare these findings with Diamond’s criteria, we can only say that we cannot yet speak of democratic consolidation within society in Brazil. Only in the study by Booth and Richard (2015), we could see that support for democracy was above 70 percent of the respondents and all the others studies before and after 2010 showed less support. Furthermore, the data showed the existence of at least a larger proportion of indifferent and authoritarian citizens who don’t show exclusive support for democracy but prefer at least hybrid regime forms.

The following article takes its cue from these studies and examines regime support in Brazil with more recent data. For this purpose, data from the seventh wave of the World Values Survey (Haerpfer et al. 2022) will be analyzed, which had been collected during May and June 2018, that means before the general election on October 7, 2018 (N=1762).[1] The data was collected via face-to-face interviews at the respondent’s home or place of residence and the answers were recorded either via a paper questionnaire (PAPI) or through a Computer Assisted Personal Interview (CAPI). 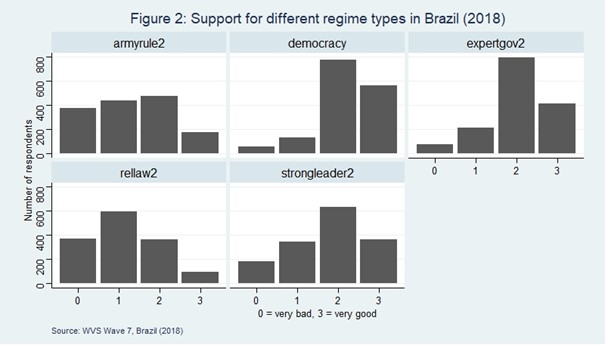 In a first step, we examine support for democracy as well as authoritarian regime alternatives (Fuchs/Roller 2019; Lagos 2008). To do this, we make use of the following question from the World Values Survey: “I will now describe different types of political systems and ask you what you think of each of these systems as a form of government for this country. Would you say that each of these systems is a very good, fairly good, fairly bad, or very bad way to govern this country?” Respondents are then presented with five different types of regimes. These are as follows: 1) “Having a strong leader who does not have to bother with parliament and elections”; 2) “Having experts, not the government, make decisions according to what they think is best for the country”; 3) “Having the army rule”; 4) “Having a democratic political system”; 5) “Having a system governed by religious law in which there are no political parties or elections”.

Figure 2 shows that democracy has the highest support in Brazilian society. About 88 percent say that having a democratic system would be very or fairly good. But the data also reveals that there is still larger support for expert governments (81%), strong leaders (66%), and – with a little lower support – army rule (44%). Only the idea that religious law should play a key role is less supported in Brazil (32%).

To go one step further, we look at items on measuring the understanding of democracy in Brazil. The World Values Survey asks the respondents how essential nine different characteristics are for the idea of democracy and rate them on a scale from 1 (not essential) to 10 (essential). The items also include authoritarian characteristics like “The army takes over when the government is incompetent”. The other eight items are: “Governments tax the rich and subsidize the poor.”; “Religious authorities ultimately interpret the laws.”; “People choose their leaders in free elections.”; “People receive state aid for unemployment.”; “Civil rights protect people from state oppression.”; “The state makes people’s incomes equal.”; “People obey their rulers.”; “Women have the same rights as men.” In Figure 3 the frequencies of the responses of all nine items are presented. 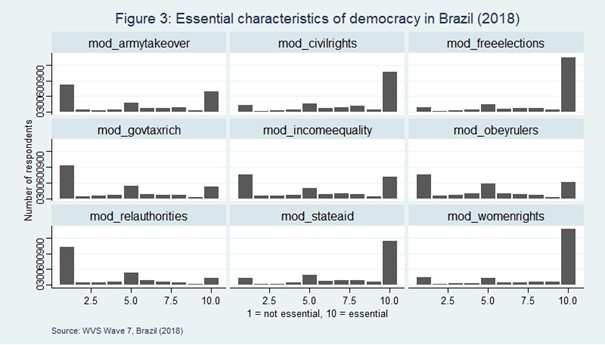 Support for a military regime and political ideology

As mentioned before the military still plays a political role in the political culture of Brazilian society and politics (Chagas-Bastos 2019; Hunter/Power 2019). But which groups still support the idea of a military regime in Brazil? Here we focus on different self-placements in the spectrum of political ideologies, namely the Left, the Center, and the Right (see also Lagos 2008).

Figure 4 presents the comparison of mean support for a military regime by different ideological groups. We have also calculated the confidence intervals (CI=95%) shown on each bar so that we can see if the groups are different. The Left shows the lowest support for a military regime, whereas the Center and the Right are more supportive of such a regime. Additionally, the political Center is not as distinct from the political Right since the CIs are quite close. This means that the possibility of a new military regime is also kind of accepted in the broader political spectrum – except the left. 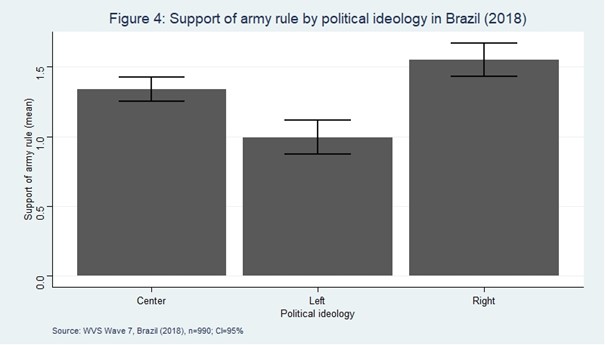 A similar pattern can be seen in Figure 5. Only the Left rejects an army takeover when the government is incompetent is an essential characteristic of democracy in Brazil. Both the Center and the Right see this option as part of their understanding of democracy. Compared to Figure 4 we can see here that now both the Center and the Right are not distinguishable any more concerning this position. 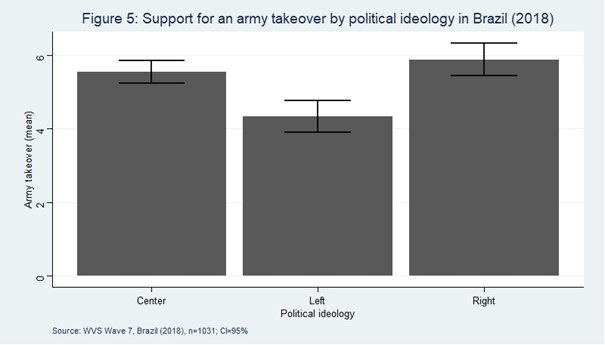 Still in the making: The democratic consolidation of Brazilian political culture

The empirical findings of this short blog post suggest different conclusions. First, the process of democratic consolidation is still in the making in Brazil. Although we can see high support for democracy, we can also see that authoritarian or technocratic regime alternatives are still seen as an optional path for Brazilians. Second, the understanding of democracy in Brazil can be described as a mixed pattern. Although elements of liberal democracy are seen as essential for democracy, there are also authoritarian characteristics associated with the idea of democracy. There exists a not irrelevant group in Brazil that shows “authoritarian notions of democracy” (Kirsch/Welzel 2019). Third, there is still a military legacy in the Brazilian political culture present. Especially the political Right and parts of the political Center are kind of supportive of a military regime.

This means that elections are not only a competition about different policies, e.g. about social politics. But in the Brazilian case, they are also a competition about the political structure, of the polity. The decline of democratic quality shown at the beginning of this post might be acceptable for those parts of Brazilian society which prefer a hybrid political regime or even a return to military rule.  As the data suggests, this is a struggle between the political Left and the political Right, which can also tear apart the political Center. It is up to political leaders to wisely balance the principles of responsiveness and responsibility in the future so as not to endanger the stability of the democratic regime and not to simply stall the ongoing consolidation process.

Carrión, Julio F. 2008. Illiberal Democracy and Normative Democracy: How is Democracy Defined in the Americas? In Challenges to Democracy in Latin America and the Caribbean: Evidence from the AmericasBarometer 2006-2007, Hrsg. Mitchell A. Seligson, 21–51. Access: https://www.vanderbilt.edu/lapop/multicountry/2006-challengestodemocracy.pdf [Accessed: 1.5.2020].

[1] See for the data collection and other information on this survey project: https://www.worldvaluessurvey.org/wvs.jsp

Dr. Christoph Mohamad-Klotzbach is a Postdoc at the Institute of Political Science and Sociology (University of Würzburg, Germany). His research focuses on various aspects of political culture, especially on regime preferences and understandings of democracy, statehood, democracy, voting behavior, and political parties. E–mail: ch.mohamad@uni-wuerzburg.de

Christoph Mohamad-Klotzbach (2022) "The democratic consolidation of Brazil and the legacy of the military regime". Brazilian Research and Studies Blog. ISSN 2701-4924. Vol. 3 Num. 1. available at: https://bras-center.com/the-democratic-consolidation-of-brazil-and-the-legacy-of-the-military-regime/, accessed on: December 1, 2022.