Autonomy is not to be confused with stubbornness! Age discrimination in COVID-19 times

In times of a pandemic, I am concerned that discriminatory positions are gaining strength. And I think the anti-discrimination/anti-racist struggle needs to take action!

After all, racist discrimination manifests itself through many formulas and brings with it subterfuges that impose on others a History that denies political and social rights and maintains the hierarchies sown with the African Diaspora.

One is mistaken whether thinks that discrimination and racism only manifest themselves against black people when it is something insidious and corrodes social structures from inside as if it were a drill that penetrates the wood to make it hollow, fragile. Racist discrimination is associated with other social markers of difference that are used not to show the beauty of the plurality of being diverse, but to point out differences as inequalities.

We have to react and we must do so vehemently, because often the racism associated with gender discrimination and the “ageism” drives away both the older ones, as well as the children and young people, causing “adult-centrism” to disallow and disrespect the older ones. After all, they would have lost the ability to be heard, and the children and young people because they are not mature. 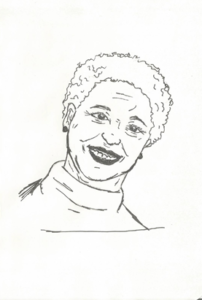 Illustration by Camille Barata, a doctoral student in Anthropology at UFPA

After all, what is ageism, age bias, or generation gap? These words are uncommon in the usual Portuguese, but they refer to a category that indicates to be related to discrimination by age, or of generational matter, towards against people or groups, based on age, no matter if the target of the prejudice is children, young people or old people. It is a powerful way to alienate people, disallowing their actions, preventing them from exercising their rights, a fact that in itself suggests unspeakable violations of human rights. Put yourself in people’s shoes!

Most of the time, age comes to us through games, jokes, and even “incarnation”, as we people from Pará say – actions that today are known by Anglicism bullying – and, we ourselves, discriminated by the disrespectful expressions, are not aware of the recreational racism, as taught by Adilson Moreira (2019). Think with me, when we received in our message boxes, now during the COVID-19 Pandemic, images trapping old people in cages; replacing the plaque of “old” with the “stubborn” inscription, it is revolting. After all, what the prejudiced people translate as stubbornness is the expression of our autonomy and the possibility of preserving it.

But amazingly, some of us still reproduce the images, laughing at ourselves. Similar situations are reproduced by adults about children and young people.

Some time ago, I saw an image that I found demeaning, a man who, I believe, not being able to cuddle a small child, let himself be photographed lying down and having the child trapped by a wide and pierced bowl beside him, a bowl where to put clothes to air. I was horrified! The examples are described to make you think how blindfolded we are to racism. It is necessary to wake up.

Returning to the pandemic that plagues us and weighs the effects of such attitudes, there are many. The people who are the target of the “incarnation” – children, young or old – may feel resentful, despised, inferior. Avoiding prejudiced and discriminatory attitudes is an act of citizenship, especially when all are weakened by the interruption of routine.

Our daily lives are difficult due to the fear of being reached by the coronavirus, especially because we hear people talking about “risk groups” every day and inside the perspective put old people, indigenous people, but the authorities forget to inform that we elderly people and indigenous peoples are not dangerous people, but people who, when contracting this devastating virus, are more likely to have a complex illness. And, perhaps because of this, in the hour of the difficult choices, of knowing who occupies the bed with possibilities of cure, as the doctors have said, it is not worth occupying a bed with an old person, after all, they will die faster than a young person.

It is true, the chance of someone over the age of 60 dying, before someone over 40 is plausible, but think of the cruelty, the massacre, the extermination that today is called genocide. It is necessary to reflect on this racist way of treating people and populations who are socially important. What used to be called ethnic cleansing, we can now call age cleansing, or to be as cruel as those who discriminate, it is age cleaning.

By endangering human existence, we are practicing racism. Think that the list, of the few cases mentioned, can be exponentially increased. I suggest that you think about the situation of prisons, young blacks, homeless people and so many other people that can be brought to light to demonstrate that the lives of these vulnerable human beings matter little to the State since they are not worthy to stay or wear mourning for them. And the relatives of these people, often, do not even have a chance to bury and cry their loved ones, such as the brutality with which the State snatches this possibility from them. And yet, we have not reached the most drastic moment of the pandemic.

Let us be anti-discriminatory/anti-racist and, in the chorus, say, as Zélia Amador de Deus (2020), “… we need to fix the world!” The world is not upside down just because of the pandemic, it has been unsettled for a long time. COVID-19 reaches all people and the only possible answer, to mitigate the effects of the Pandemic, is the social distance, because we are responding for the lack of charge from the authorities that, in Brazil, decreed the bankruptcy of the Unified Health System (SUS) and, at the same time, we have to rely on SUS, as the private network also does not respond to the demands of coronavirus time. Notice the paradox.

Even if you doubt what I say, “stay at home”! The order is to avoid the worst! However, be careful, it is not only the elders who need to be at home, it is essential that society – and here not only includes people, but institutions and companies – the effort is social and it has implications for rights and obligations, especially since it is not known how, nor how big an impact the virus will be in Brazil.

Jane Felipe Beltrão is a professor at the Federal University of Pará (UFPA). Scholarship holder of research productivity from the National Council for Scientific and Technological Development (CNPq) level 1B. Email: janebeltrao@gmail.com
To read more about anti-racism: