Science and knowledge as threats

Home/ISSN Index/Vol. 1 Num. 1/Science and knowledge as threats
Previous Next

Science and knowledge as threats

Since Bolsonaro assumed the Presidency of the Republic, education, science, and culture have suffered a major breakdown. The collection of inept, cartoonish, and even clearly fascist ministers is concrete proof of the contempt with which these areas have been viewed by the government.

On March 24, CNPq published its guidelines for the next 4 years, from which the areas of human sciences, letters, and arts, in addition to the so-called basic sciences, simply disappeared.

Such attitudes provoke reflections of three orders: the first goes in the direction of the analysis of the current political pact that rules the country; the second leads us to think about the crisis that this type of policy represents for scientific development in general, for universities, for undergraduate and graduate courses; the third makes us reflect what a country is losing, in the short, medium and long term when the areas of the humanities are prevented from developing properly.

These three themes are too complex to be developed in the space of this bulletin, but I will baste a few paragraphs with points.

Regarding the political pact that rules the country and the contempt for the sciences in general and the humanities in particular, it must be clear that this is not a country governed by Brancaleone’ s army, no matter how the president seems to be the commander of one. This government represents very clear interests, defined and defended by a significant portion of the Brazilian population, composed of broad sectors of business, the upper-middle class, with a higher level of education, and an unassisted popular stratum. This heterogeneous set of forces forms a breeding ground for the sciences, and especially the humanities, from two opposing perspectives that lead to the same result: the business community and the middle class see the problem from a higher position, despising Brazilian science and culture. Some, more economically well off, send their children to study abroad since they were children, others have Miami as the roof of their objects of desire and think that only a government for a few can guarantee that they continue to dream. The other group, formed by supporters of the working classes, was taught, for centuries, that university, art, culture, and science are things that do not belong to them. Therefore, they feel welcomed when the government says it will not spend money on the so-called troublemakers.

The second order of reflection concerns scientific development, education, and universities, mainly the public university, but not only it. In the last decades, there has been a coordinated effort to expand higher education in the country, which can be measured both quantitatively, with a significant increase in vacancies with the creation of new universities and financing programs in private universities, as well as qualitatively, with incentives and evaluation by Capes and CNPq. The government discourse completely ignores that the PPGs (Postgraduate Programs) are rigorously evaluated, that the professors of public universities, contrary to common sense repeated ad nauseam, do not progress in their career by the length of service, but by rigorous evaluation of their peers, that a significant part of the professors is also CNPq productivity fellows also evaluated by this Council. 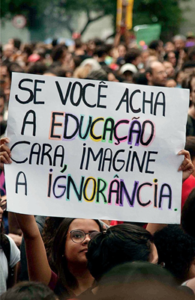 In public universities, more than 90% of research takes place in Brazil. Only by maintaining and expanding the country’s university network will we be able to guarantee the necessary scientific research for any development project. The contempt for academia and science, in the current government, is associated with a market perspective of ultra-neoliberalism that dominates the so-called economic team, where the non-profit should not be supported. The current health crisis that affects the world will have negative consequences for the maintenance of lives in Brazil as a result of this stance.

The third order of reflection deals specifically with how the areas of the humanities in general and the Social Sciences, in particular, have been treated by the current government. There is, before any consideration, opportunism combined with pure ignorance, in the strict sense of ignorance. Without a set of their ideas capable of supporting an educational project or even public policies, the group in power can only put itself through denial. In this way, they disorganize education, attributing the entire project before Paulo Freire’s pedagogy, or all theoretical reflection of the social sciences to a peculiar Gramscian Marxist culture. They are doubly wrong. Concerning Paulo Freire, he is unfortunately not as present in Brazilian education as the government wants to believe, and that Gramscian Marxist culture is great nonsense, only fitting in the head of those who have no idea what Marxism is, nor knows the work of the Italian philosopher. It is an opportunistic attitude that fuels the paranoid anti-communism of the Brazilian middle classes.

That said, the persecution of the social sciences, together with philosophy, history, letters and the arts in general, reveals the fear – justified, by the way – of critical thinking, the will to know, to explore the new, to break paradigms that are part of the profession of all these areas. The humanities put to debate the new forms of work that deregulated rights and reorganized the interests of capital. Also, together with social movements, they gave a voice to those hitherto invisible, unwanted by conservative society, making visible the conditions of women, blacks, indigenous people, prisoners, the unemployed, the informal. The humanities, throughout history, have shown the silencing of racism in Brazil for centuries and the agency of the enslaved population towards their liberation. The social sciences studied the civic-military dictatorship, which dominated the country for more than 20 years from 1964, dealt with censorship, proved the existence of torture, the disappeared, the existence of economic growth that deepened social inequality.

All of this was done with scientific methodology, with empirical research, with data analysis, with hours of interviews, searching in archives, analyzing documents. When social scientists analyze the current situation Brazil is going through and identify a serious threat to democratic institutions, they recognize a crisis in public policies and an inability to make decisions in the face of the pandemic that presents itself. It is not guesswork, it is not nitpicking, it is the analysis based on accumulated knowledge.

Hard times, very difficult for those dedicated to producing knowledge, await us. But only by resisting, persisting in analyzing, in making critical thinking and rigorous research grow, will we be leaving hopelessness aside and facing reality, without false optimism. We cannot decide anything, possibly nothing will change. But we are essential because we will always denounce, without guessing, without enthusiasm for one or another fad, firm, based on our research strictly based on scientific theories and methods.

Céli Regina Jardim Pinto is a Ph.D. in Political Science, Professor at the PPG in History, and Professor Emeritus at UFRGS.