This short analysis aims to contribute to interpretations of the movement on Twitter of possible candidates in the 2022 elections, as well as about what is said about them in the interactions of users of the platform in the month of April. This is ongoing research work and will be refined over the months leading up to the 2022 election.

Daily tweets spanning from April 1 to April 30 were collected for each one of the three main candidates in the Brazilian presidential election. Tweets were collected from both candidates’ timelines and Twitter
The authors thank Twitter for the academic accounts granted to them.
users mentioning the candidates, totaling more than 11 million tweets. Data were extracted through a Twitter API used exclusively for academic purposes and analyzed using R software. Tweets mentioning the respective candidates were collected independently using the words “Bolsonaro”, “Ciro” and “Lula” as search criteria.

General context
It is worth noting the disparity between the number of candidates’ Twitter followers during the analysis period (April 2022).

In Image1, we report the number of tweets on the candidates’ timeline, among the three that were part of our survey: Ciro, Lula, and Bolsonaro, according to the frequency with which the candidates tweeted in April. 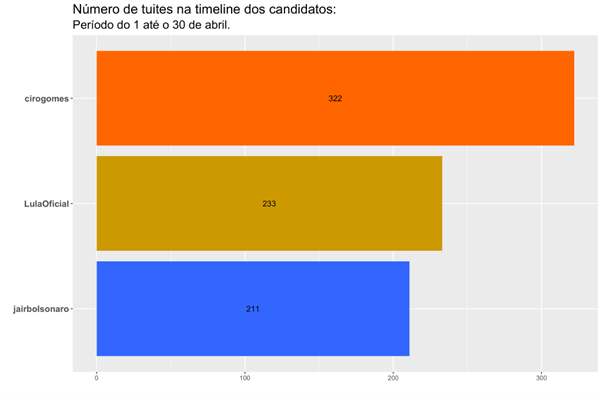 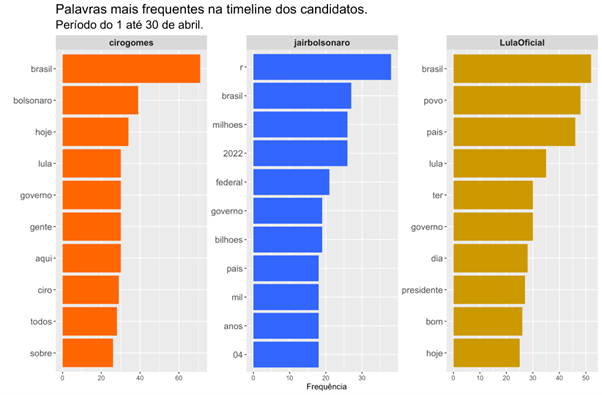 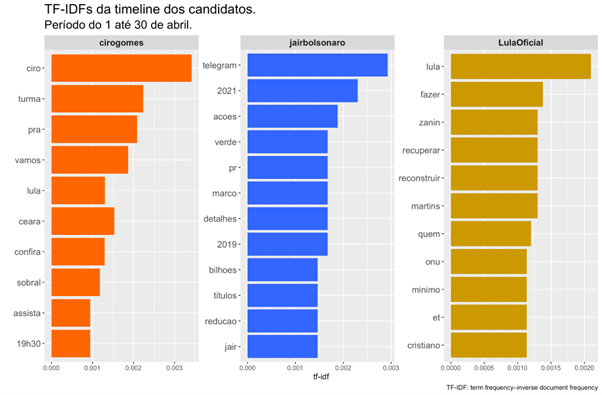 The analysis of the most frequent words in the candidates’ timeline tweets in Image 2 reveals a dominant overview of the subjects they deal with. While Bolsonaro’s profile highlights the government’s achievements, especially spending/investments in Brazilian Reais (identified by the term “r” in the plot) expressed in terms of millions and billions; Lula’s profile highlights the people and brings a positive key, with the term “good” [“bom”]. Ciro’s profile, on the other hand, is concerned with mentioning the other two candidates by name.

In Image  3, the TF-IDF (term frequency-inverse document frequency) reflects the frequency of words in candidate timeline tweets that are infrequent for the three candidates overall. Thereby:

Lula’s profile stands out for its proposals, through the emphasis given to verbs such as “make, restore, highlight the use of reconstruction” [“fazer, recuperar, reconstruir”].

Bolsonaro’s profile features the word “Telegram” and the mention of “billions, actions and public investments” [“ações, bilhões e títulos”], as well as the emphasis on “reduction” [“redução”], highlighting his government actions between 2019 and 2021 (hence the terms 2019 and 2021 also in the plot).

In Ciro’s profile, emphasis is given to Ceará and Lula. (Ceará is a State in Northeast Brazil)

It is worth mentioning that the three profiles speak of the candidates themselves. That is, Lula and Ciro to their names directly, and Bolsonaro through references to “Jair” and “pr” (“president”).
Still as a final remark, the words “ONU (UN in Portuguese), Zanin and Cristiano” appear in the mentions of Lula’s profile, associated with the decision of the UN Human Rights Committee on his sentence in Lava Jato. It is also important to mention that the word “et” in Lula’s profile refers to tweets on the candidate’s timeline that are posted in French manifesting his support for Emmanuel Macron in the French presidential elections. Finally, the high frequency observed in the term “7:30 pm” [“19h30”] in the candidate Ciro Gomes’ timeline, refers to “Ciro Games: A live do Cirão” that takes place on Tuesdays on several streaming channels.

Tweets about the candidates

The total number of tweets mentioning each candidate is displayed in Image 4 and the daily evolution in Image 5. 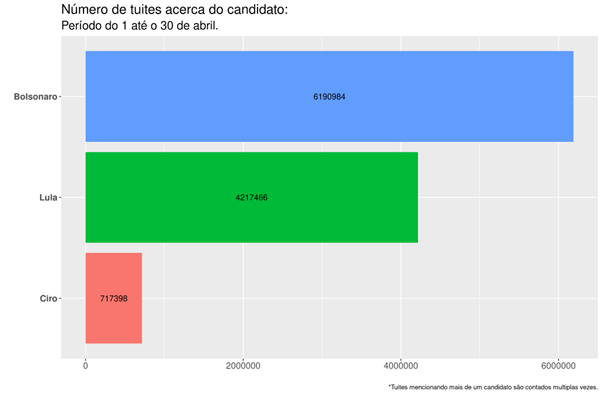 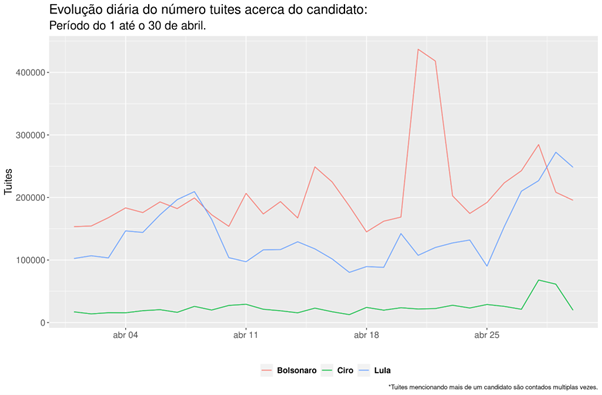 Finally, we present below three-word clouds with, excluding stop words, the top 100 words used in the interactions of Twitter users in April. For better visualization, each candidate’s name was taken from its cloud. 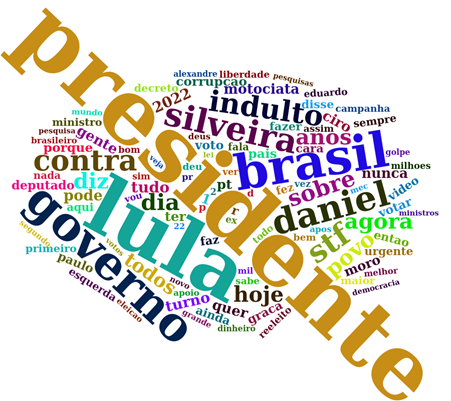 Bolsonaro: in the foreground, the words “president”, “Brazil”, “Lula” and “government” [“presidente”, “Brasil”, “Lula” e “governo”]; in the background, “pardon” [“indulto”], “Daniel” and “Silveira”, which are associated with “Supreme Court” [STF], “people” [povo], and the word “against” [“contra”]; third it comes “motociata” [motorcycle parade], “corruption” [corrupção], “vote” [“voto”] and “PT” [Worker’s Party]. It can be noted that, among the candidates investigated, Bolsonaro’s cloud is more dispersed and has fewer nouns. 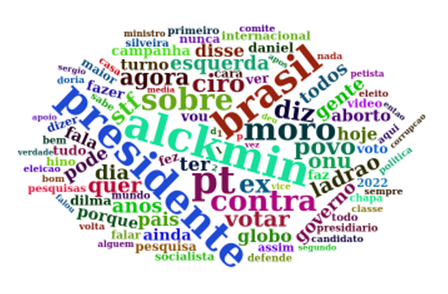 Lula: in the foreground, and in equal equivalence appear “president”, “Alckmin”, “Brazil” and “PT”; in the background “Moro”, “about” and “against”; in the third plane, “now”, “says”, “Ciro”, “people”, “UN”, “thief”
“A good thief is a dead thief” is a Brazilian saying repeated as propaganda hit in Bolsonaro’s Campaign of 2018.
[“ladrão”] and “vote”. “Alckmin” and “Moro” are the last names of the vice-president candidate of Lula and the former judge responsible for the Lava Jato and also an almost presidential candidate. It can be highlighted that the Lula cloud has a higher density in the observed frequency of words, whether verbs, nouns, or adjectives when compared to the others. 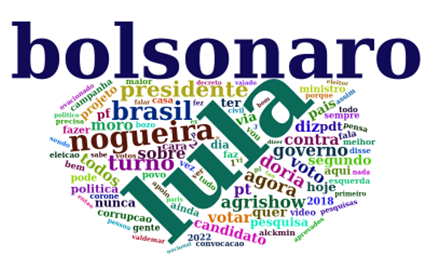 The sentiment of each tweet was constructed by identifying the sentiments of the basic units (the words) using the Oplexicon v3.0 and Sentilex dictionaries, from the LexiconPT Package. Thus, each word found in the dictionaries receives 1, -1, or 0 scores, depending on whether the feeling is positive, negative, or neutral, respectively. Words not found in the dictionaries also receive a 0 score. The values ​​assigned to each word within the tweet were added up, and depending on the result positive, negative, or zero, the sentiment of the tweet is classified. 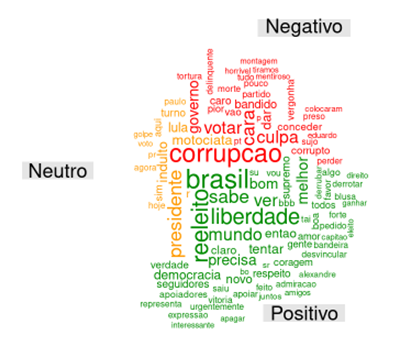 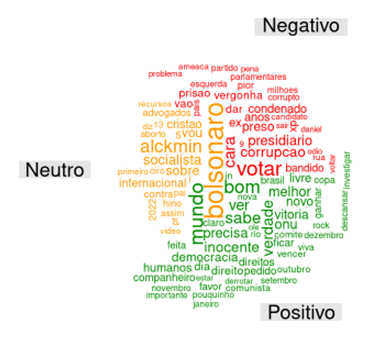 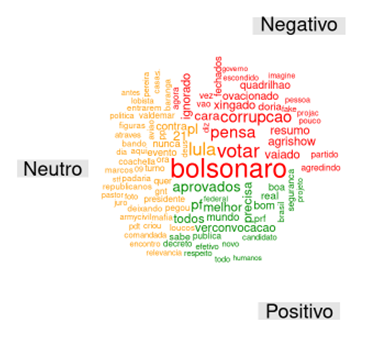 Carlos Trucíos, PhD in Statistics, is a Professor of Quantitative Methods at Department of Business/UFRJ.

Marcelo Castañeda de Araujo, PhD in Social Sciences, is a  Professor of Organizational Studies at Department of Business/UFRJ.