The first round of the upcoming municipal elections in Brazil will take place on 15th November of this year, with over a one-month delay due to the coronavirus pandemic[1]. Both the public and scholars will need to wait a little bit to unfold the many expectations that come with these elections. Of course, each election entails some degree of expectation, especially in a country such as Brazil, where there is a high party fragmentation and an unstable party system, and thus a high degree of uncertainty about who the winners will be. However, two contextual facts make these elections more interesting to both the public’s and scholars’ eyes. First, it’s the first election since democratization that will happen in the middle of a pandemic – along with all of its challenges. Second, it’s the first one since Jair Bolsonaro’s election in 2018.

These two contextual facts certainly bring more uncertainty to the polls, and their consequences are still to be seen, although some of them can be already predicted based on data that have been collected and recent events that have happened in Brazilian politics.

The pandemic has hit Brazil in several ways, showing – or better, intensifying – its greatest weaknesses. It tested (and is still testing) the resilience of not only the Brazilian public but also Jair Bolsonaro’s administration. There’s no doubt (or at least there shouldn’t be) that the federal government, which he as the president of Brazil represents, has acted poorly regarding the measures to prevent the pandemic from spreading throughout the country. The earlier stages of the pandemic were marked by haphazard, shortsighted decisions taken by the federal government, which have had lethal consequences – by the time I wrote this piece, over 146,000 Brazilians had lost their lives due to COVID-19. Meanwhile, Bolsonaro showed more concern for his and his family’s ‘personal security’, which resulted in the resignation of the justice minister Sergio Moro in April, than for the containment of the virus (which in April had already claimed more than 3,300 lives).

Now, seven months later, the daily coronavirus infection rate in Brazil has been decreasing since the first week of September, while Bolsonaro’s approval is going up: for the first time since May 2019, the president’s approval rating is higher than his disapproval rating.[2] This confirms the trend registered in July of Bolsonaro’s popularity increasing. Although I could concentrate on trying to explain the reasons for this increase (among them is certainly the emergency aid – auxílio emergencial – that about 45% of Brazilian families have been receiving since April), I would rather dig into its possible consequences, especially politically.

Obviously, we should rely on opinion polls to predict not only voters’ electoral behavior but also the strategies used by political parties and their leaders. Nevertheless, it’s the upcoming municipal elections that will tell us whether nor not Bolsonaro’s popularity is strong. They will reveal the real chances that the Bolsonarismo stands. In fact, existing scholarship has already borne out the influence of the national arena on the subnational level. If we consider local elections as second-order ones, they are likely to work as a barometer for the next national polls and/or should mirror the results of the last ones (Swenden and Maddens 2009). In this case, considering the current context in which Bolsonaro was elected and that his popularity is increasing, one possible scenario is that his allies at the local level will hold the power in a large part of the municipalities. It’s worth noting, for instance, that the opposite happened with the Workers’ Party (Partido dos Trabalhadores, PT) in 2016: the crisis that the party went through at the national level cost it the loss of more than a half of the municipalities where the party was in charge. Therefore, it’s possible that Bolsonaro’s allies will take advantage of his increasing approval by attaching themselves to his image in order to be elected in November. Marcelo Crivella (Republicanos), the mayor of Rio de Janeiro, has already given this strategy a shot[3], despite the uncertainty around his eligibility due to accusations of abuse of political power. 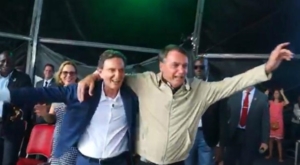 However, the idea of second-order politics is not the only approach used to analyze local elections. Existing literature has also tackled the autonomy of the subnational level as an arena of electoral competition (Gibson and Suarez-Cao 2010; Došek and Freidenberg 2013). In other words, we should consider that the local context, i.e. states, provinces and municipalities, has its own political dynamics that do not necessarily depend on what happens at the national level. According to this perspective, voters might see local elections as having their own relevance, consider them an opportunity to address local issues and go in a different direction from the national arena. A good example of the independence of the subnational electoral competition in Brazil is the fact that the Brazilian Democratic Movement (Movimento Democrático Brasileiro, MDB) is the party that has held the highest number of mayors and city councilors since 2000, despite the fact that it has not yet been elected to the national executive power. From this perspective, Bolsonaro’s recent approval might not secure the victory of his allies (we cannot name a party, as the president is currently without one). Moreover, voters might see the upcoming municipal elections as a way of rewarding or punishing political authorities based on their actions (or lack thereof) regarding the pandemic. In fact, disagreement between levels of government and national and subnational authorities were, unfortunately, a feature of the struggle to stop the spread of the virus in Brazil.

To sum things up, nobody can be totally sure of what the results of the 2020 Brazilian municipal elections will be. We’re all thinking about them in order to guess what an unforeseen future holds for us. However, one thing is certain: Bolsonaro knows that his reelection depends on having the support of local politicians who are closer to the voters and might serve as a decisive electoral link. It’s not aimlessly that he has been supporting some candidacies (not yet publicly) such as Celso Russomanno (Republicanos), who will run for mayor in the city of São Paulo, the largest electoral college in Brazil. After all, one lesson that he has learned from the pandemic is that good alliances can hold politicians in power, regardless of their mistakes. 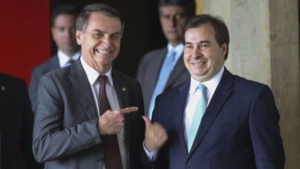 Jair Bolsonaro and the President of the Chamber of Deputies, Rodrigo Maia (Democratas). Photo: Reproduction/Wikipedia.

Jayane Maia is a research fellow at the German Institute for Global and Area Studies (GIGA) and a doctoral student at the University of Hamburg. She holds a scholarship from the Deutscher Akademischer Austauschdienst (DAAD). Email: jayane.maia@giga-hamburg.de.

[1] The first round usually takes place in October every four years.