Daily tweets spanning from May 1st to May 31st were collected for each one of the three main candidates in the Brazilian presidential election. Tweets were collected from both candidates’ timelines and Twitter users mentioning the candidates, totaling more than 13 million tweets. Data were extracted through a Twitter API used exclusively for academic purposes and analyzed using R software. The authors thank Twitter for the academic accounts granted to them.

Herein is the updated data (May versus April, data as of June 15th, 2022) of Twitter followers for each of the candidates.

In Image 1, we report the number of tweets on the candidates’ timeline, among the three that were part of our survey: Ciro, Lula, and Bolsonaro, according to the frequency with which the candidates tweeted in April. 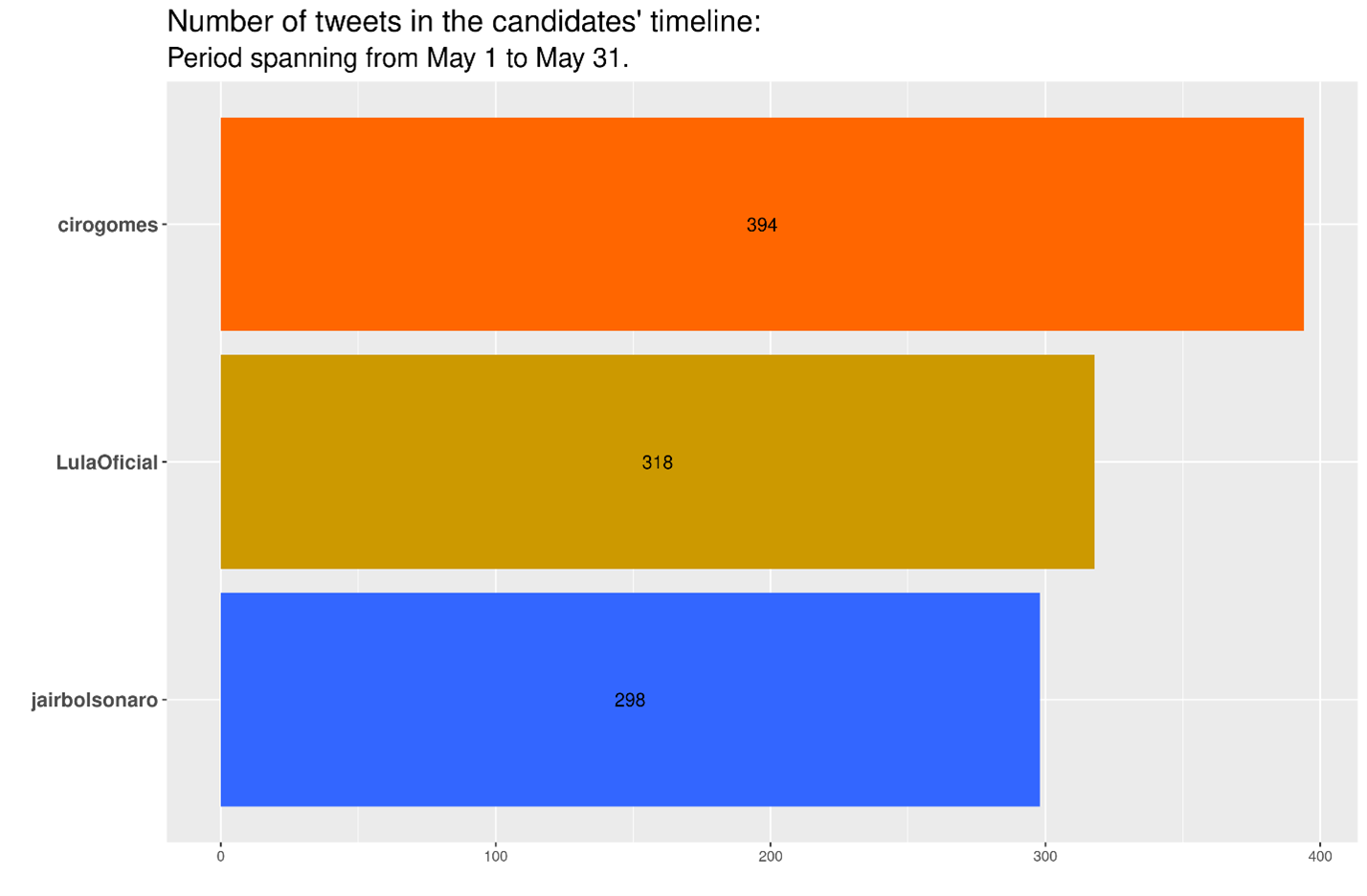 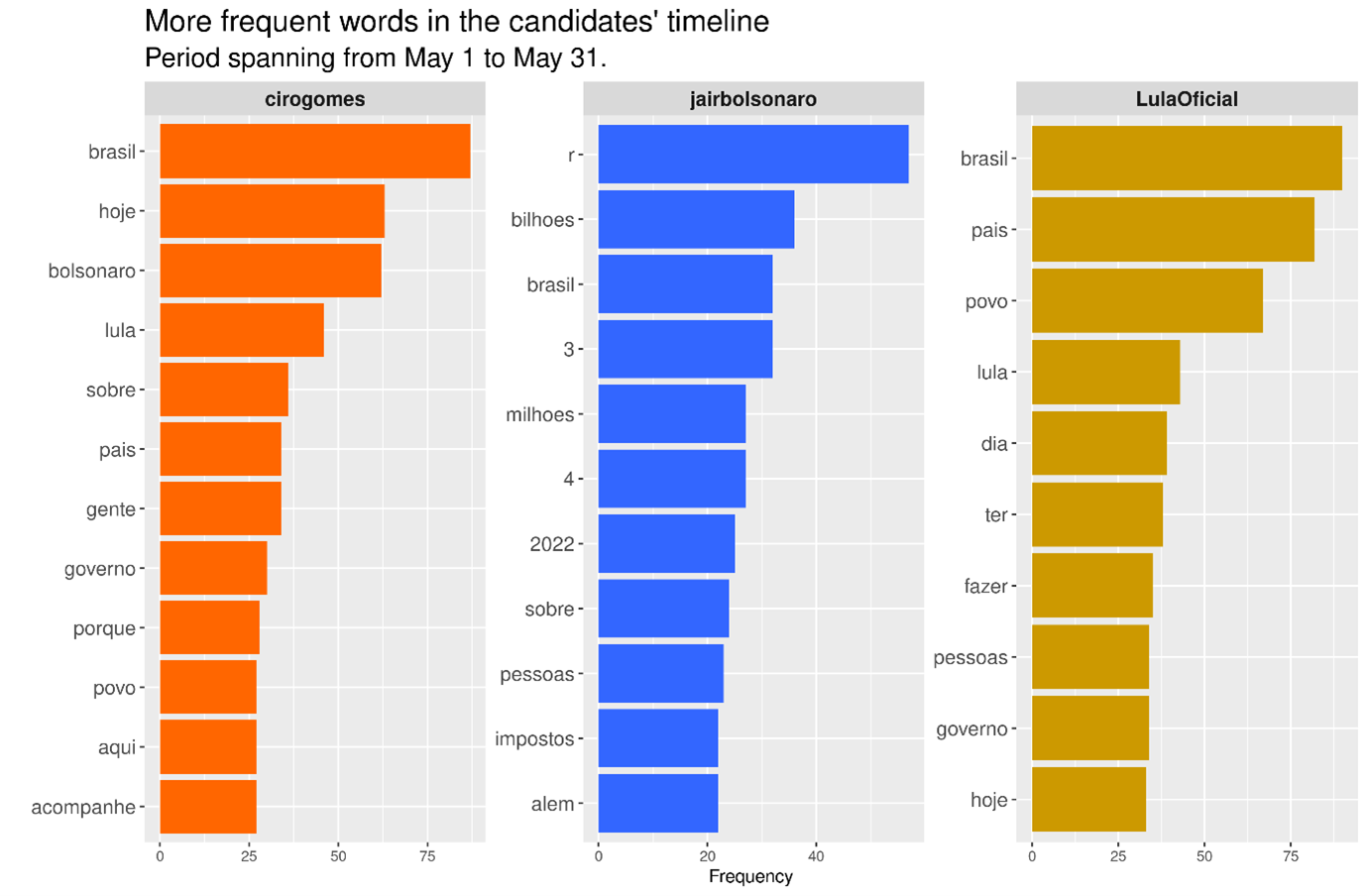 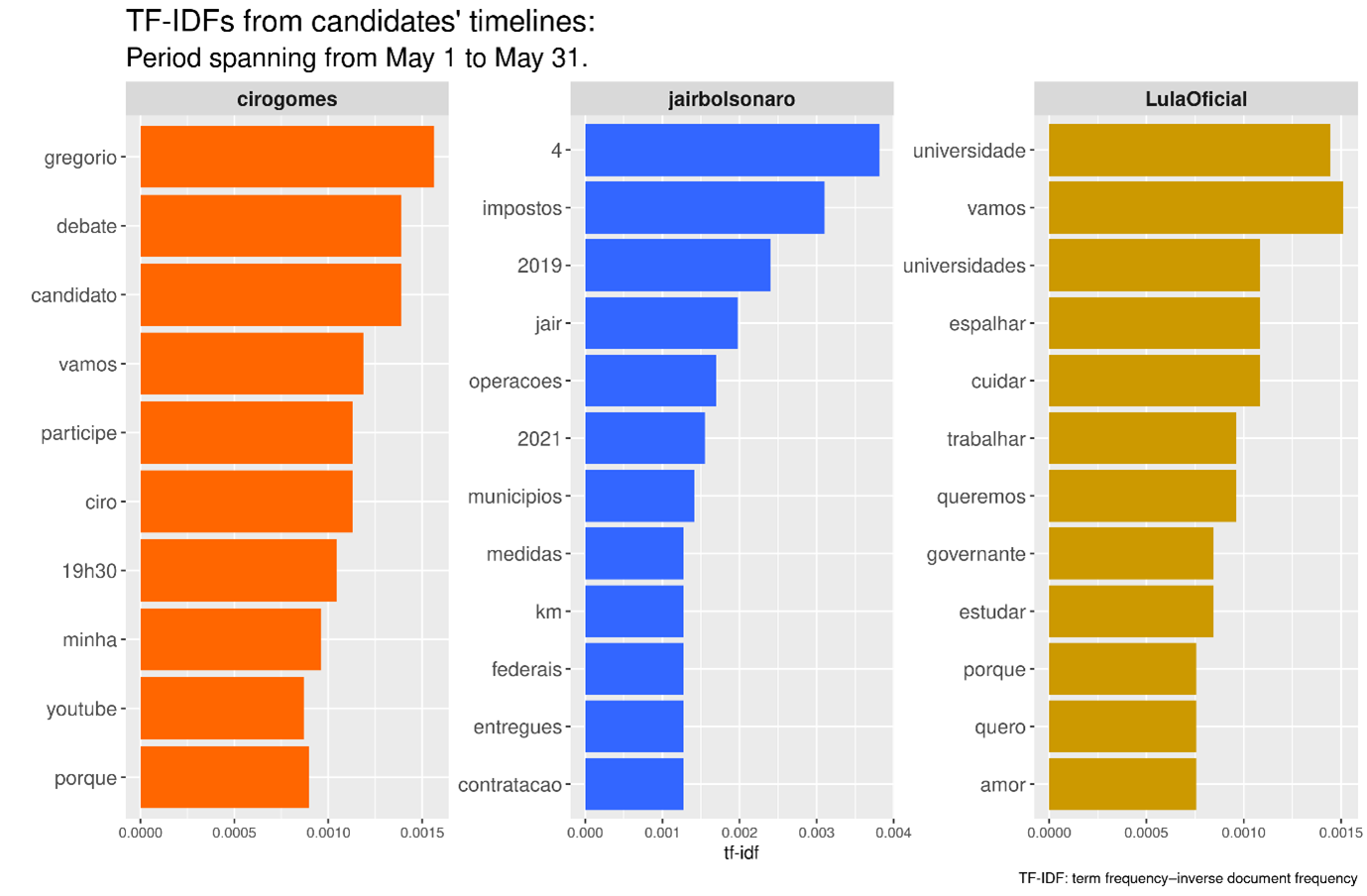 The analysis of the most frequent words in the candidates’ timeline tweets in Image 2 reveals a dominant overview of the subjects they deal with. In Bolsonaro’s profile, it is possible to point out a continuity, about the month of April, with emphasis on the government’s achievements spending in “Reais (r)” expressed in figures of “billions” [“bilhões”] and “millions” [“milhões”]. The consolidated novelty of the month of April appears in the mention of the term “taxes” [“impostos”] associated with these images. Lula’s profile highlights words such as “country” [“país”], “Brazil”, “people” [“povo”], “everyone” [“todos”], “persons” [“pessoas”] and the focus on the present – “today” [“hoje’]. In Ciro’s profile, the concern remains with mentioning the other two candidates by name, and it is also possible to note, in data consolidated for the month, the mentions of “people” [“povo”], “today” [“hoje”], “Brazil”, “folk” [“gente”] and “follow” [“acompanhe”]. Finally, the name “Brazil” is a common mention observed in the profile of the three candidates.

In general, it can be noticed, on one hand, that Bolsonaro’s tweets focus on actions taken during his ongoing government. Lula’s tweets, on the other hand, focus on propositional actions as a candidate. Finally, Ciro’s tweets highlight recent events involving the candidate.

Tweets about the candidates

The total number of tweets mentioning each candidate is displayed in Image 4 and the daily evolution in Image  5. 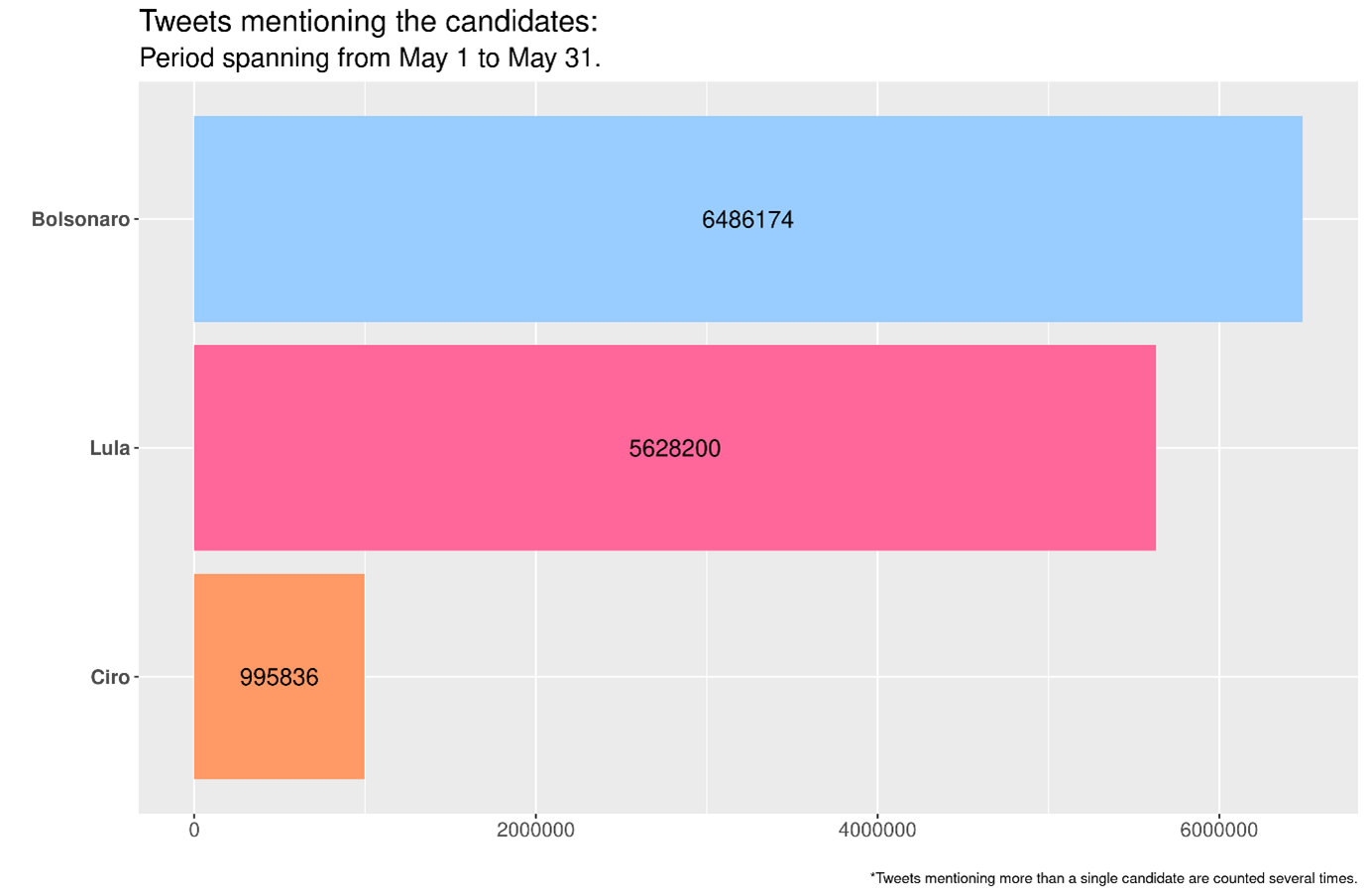 Concerning what was found in April, the previous rank was kept. It is possible to point out, however, that the distance that once separated Bolsonaro from Lula has diminished. In April, that distance was almost 2 million tweets. In May, that difference drops to less than a million. Compared to the previous month, the number of tweets mentioning the candidates increased by approximately 5% (Bolsonaro), 33% (Lula), and 39% (Ciro). 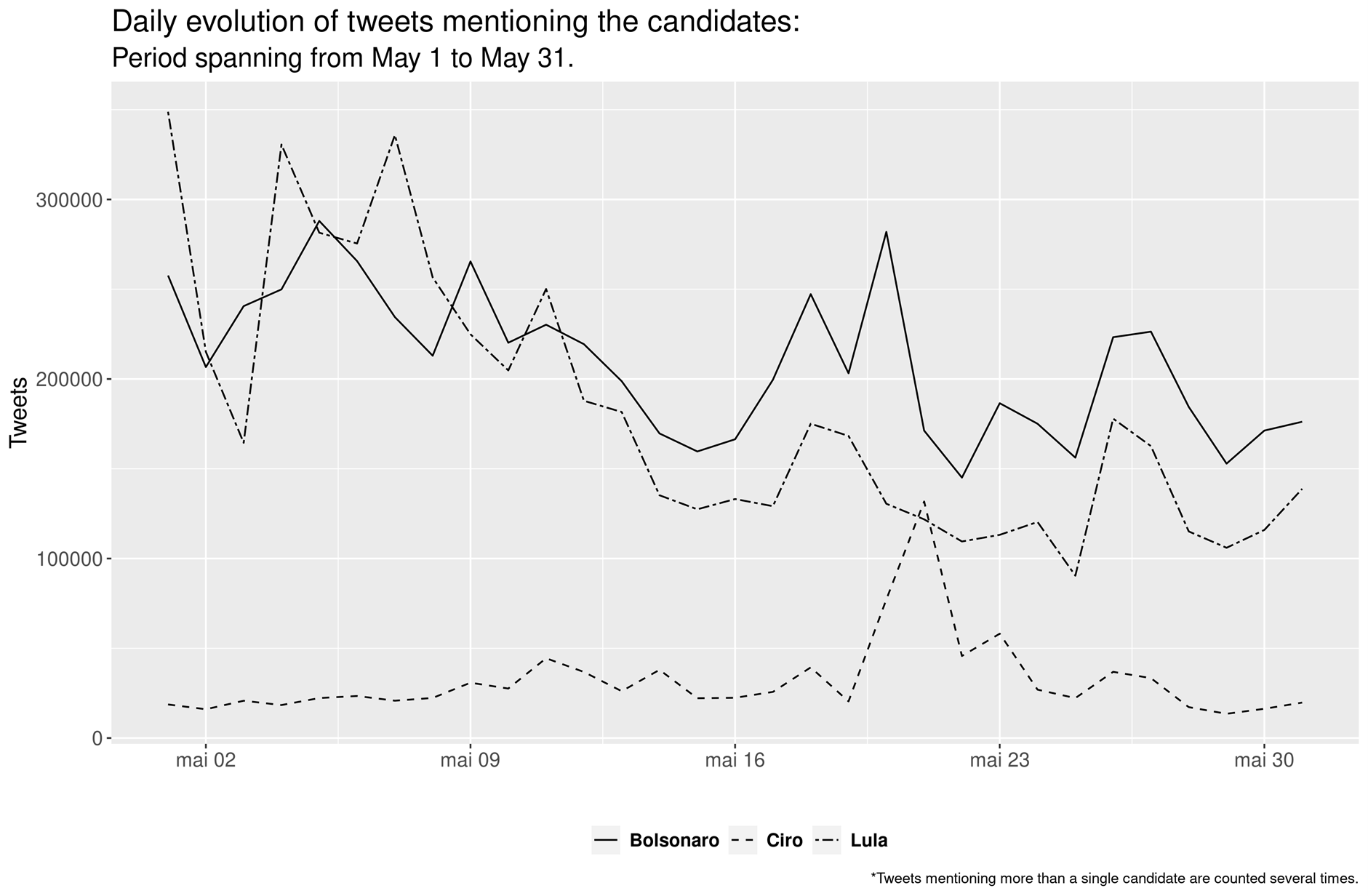 Finally, we present below three-word clouds with, excluding stop words, the top 100 words used in the interactions of Twitter users in May. For better visualization, each candidate’s name was taken from its cloud. 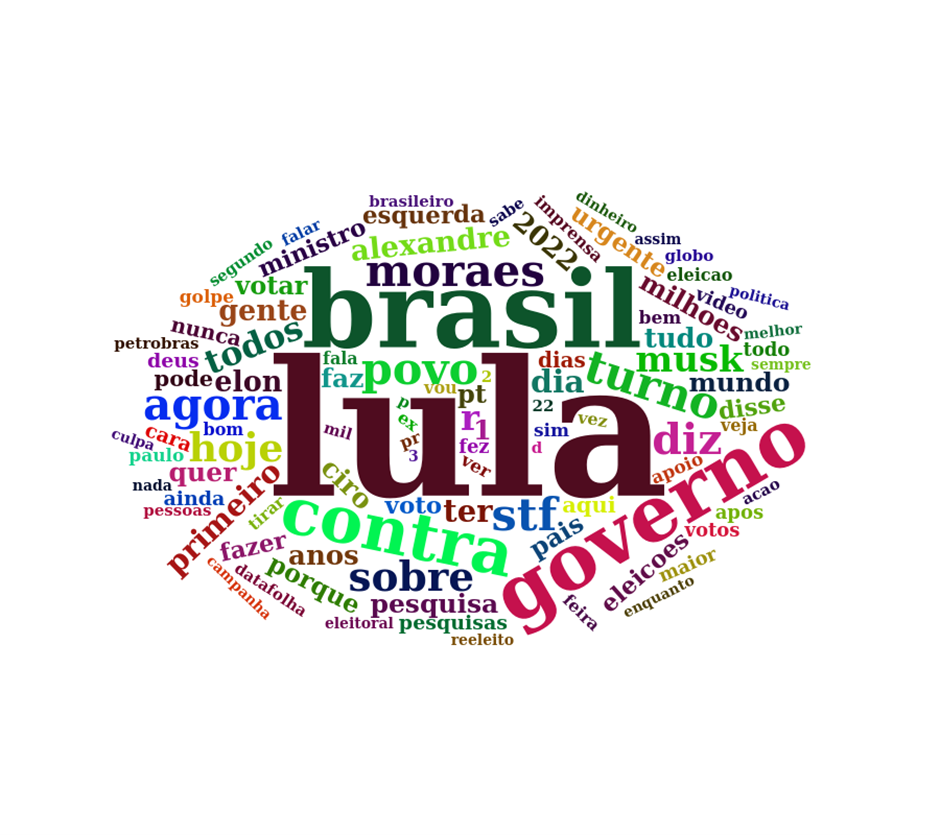 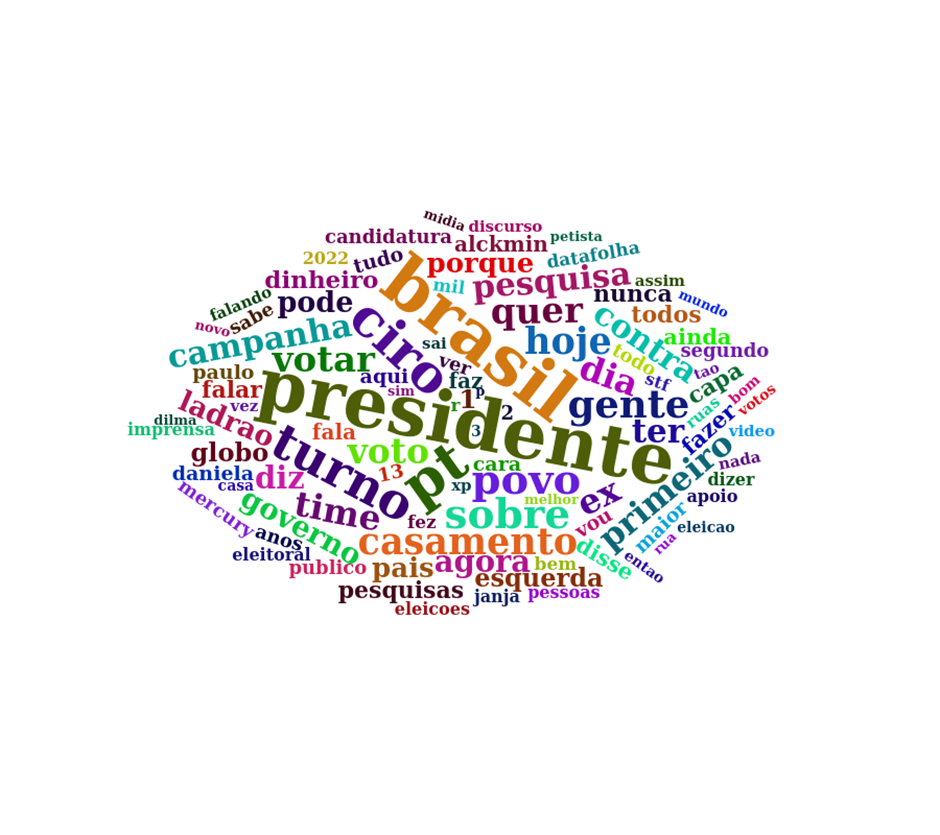 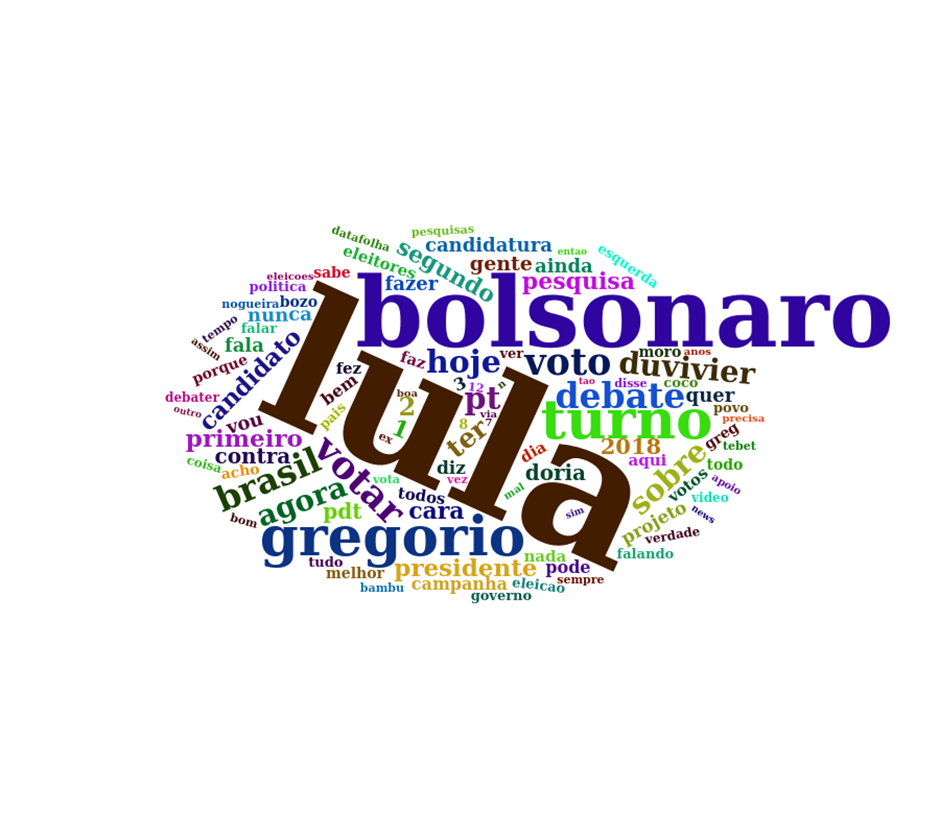 The sentiment of each tweet was constructed by identifying the sentiments of the basic units (the words) using the Oplexicon v3.0 and Sentilex dictionaries, from the LexiconPT Package. Thus, each word in the dictionaries receives 1, -1, or 0 scores, depending on whether the feeling is positive, negative, or neutral, respectively. Words not found in the dictionaries also receive a 0 score. The values assigned to each word within the tweet were added up, and depending on the result positive, negative, or zero, the sentiment of the tweet is classified. In Image 9, feelings (Negative, Neutral, and Positive) are presented in percentages per candidate. It is possible to highlight a balance between the feelings expressed in the tweets of the three candidates. Such data will be monitored over time comparatively. This is a portrait, a sentimental snapshot of May on Twitter. 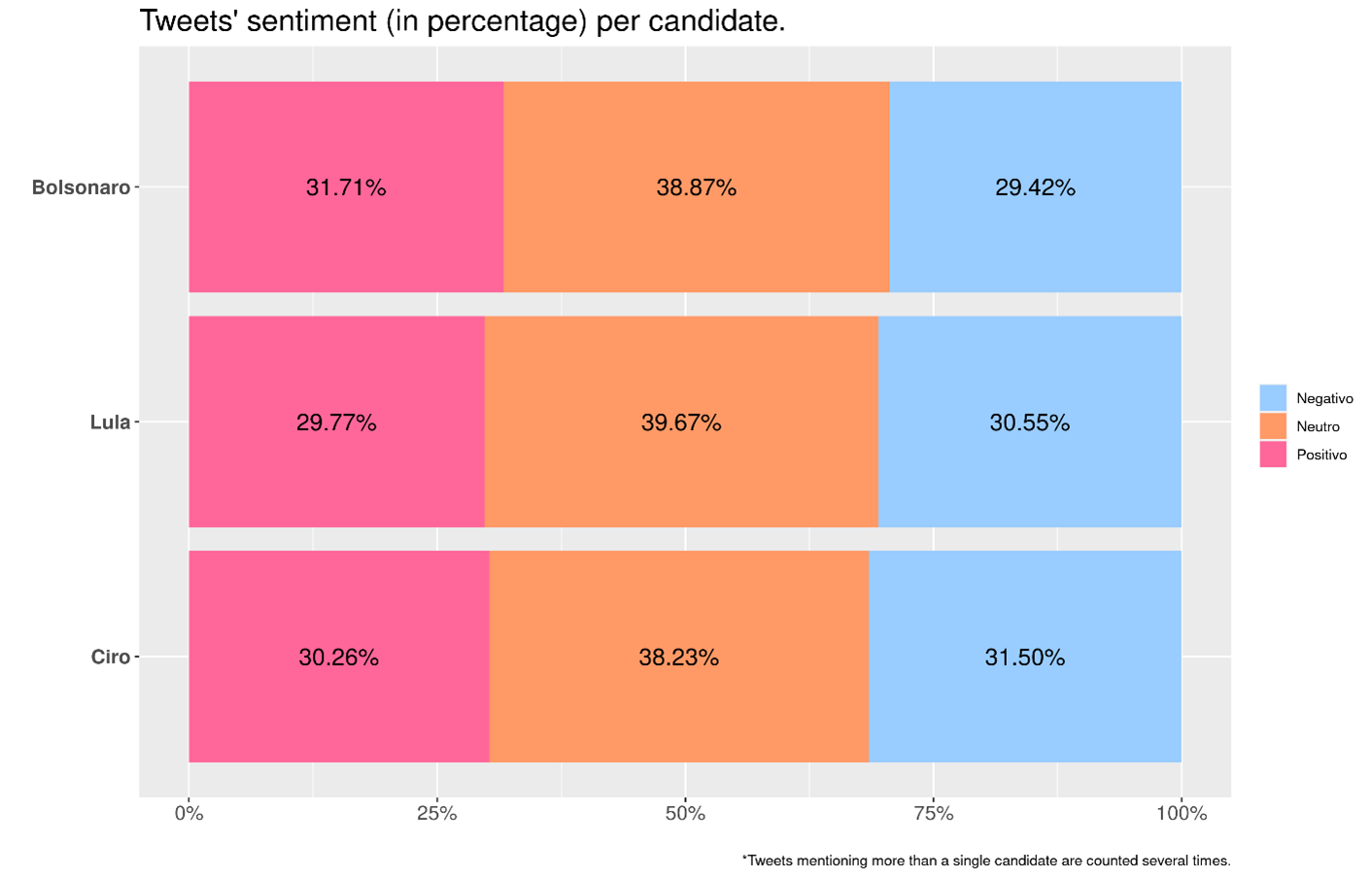 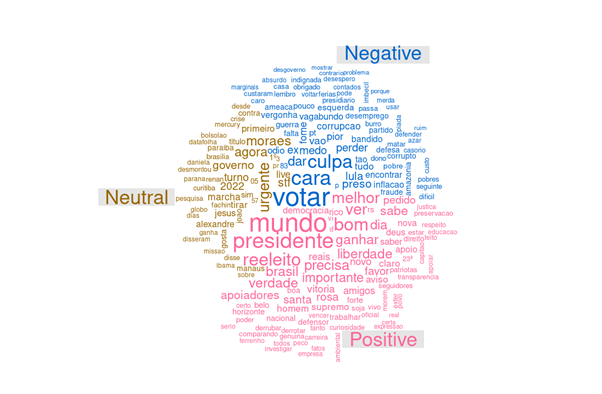 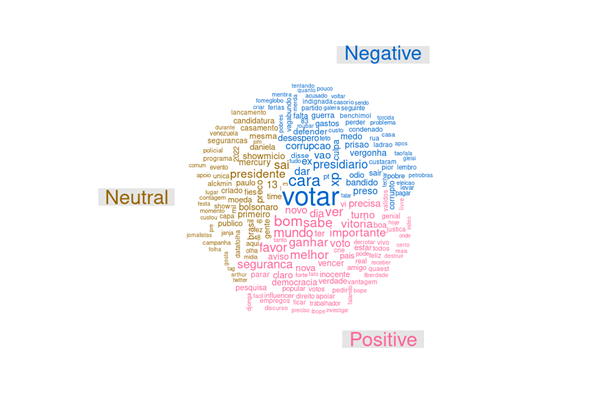 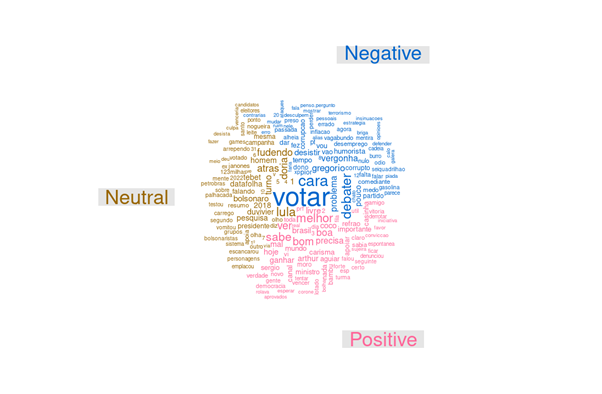 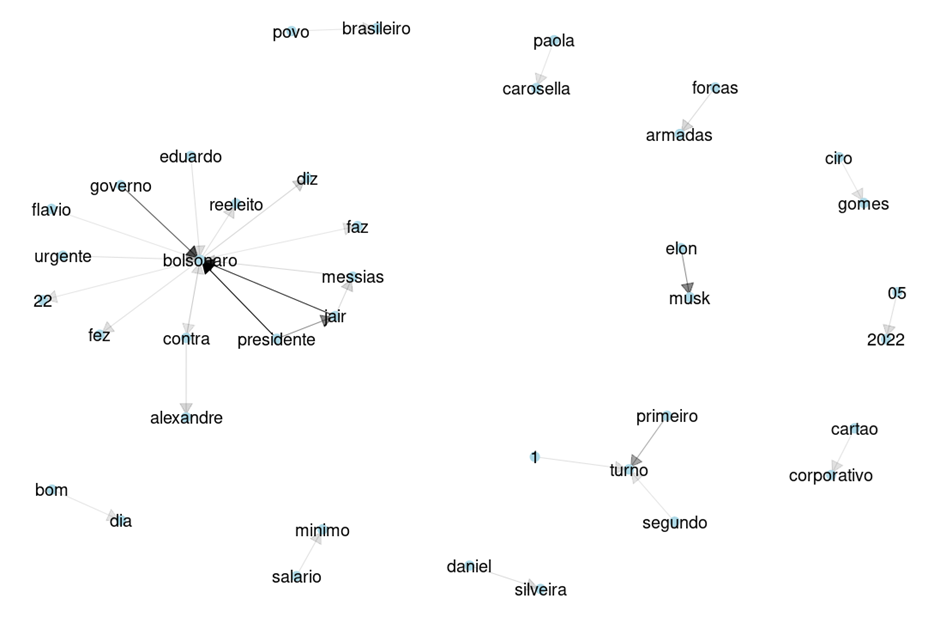 Bolsonaro: among the most frequent bigrams we have “president => Bolsonaro”, “Jair => Bolsonaro” and “government => Bolsonaro”. Other bigrams directly related to these and that called our attention are the sequence “Bolsonaro => against =>Alexandre” referring to the discrepancy between the current president and the current minister of the Supreme Court. In a similar sense, the sequences “Flavio => Bolsonaro” and “Eduardo => Bolsonaro” are also frequent, referring to tweets that may not necessarily refer to the presidential candidate, but to his both sons, that are also elected representatives in the country ( Flávio Bolsonaro and Eduardo Bolsonaro, respectively senator and federal deputy elected together with their father by Rio de Janeiro state in 2018).It is also possible to highlight the secondary mentions “Armed => Forces”, “Elon => Musk” and “first => turn”. 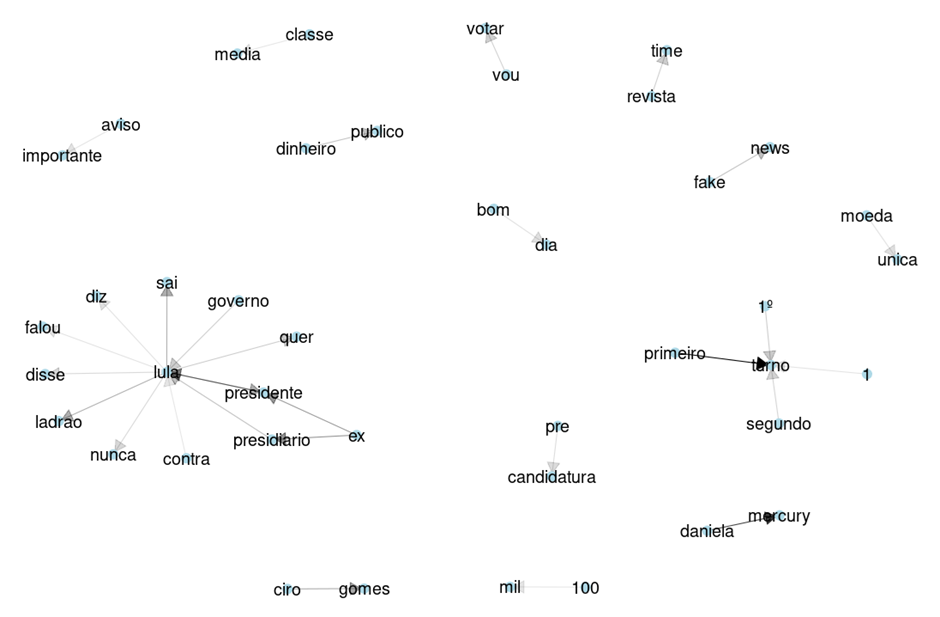 *IPESPE –Institute for Social, Political and Economic Research [Instituto de Pesquisas Sociais, Políticas e Econômicas] is one among the oldest and most respected centers of research on public opinion and market research in Brazil. (https://ipespe.org.br/ )

The presentation of this dataset aims to contribute to interpretations of the movement on Twitter of possible candidates in the 2022 elections, as well as about what is said about them in the interactions of users of the platform throughout the month of May, in comparison to April, and that can be found here ( https://bras-center.com/brazilians-presidential-candidates-on-twitter-april-report/). This is ongoing research work and will be refined over the months leading up to the 2022 election.